One way Obama can earn his Nobel Peace Prize

The U.S. is one of a few countries that won't ban land mines. It's time for the president to change that 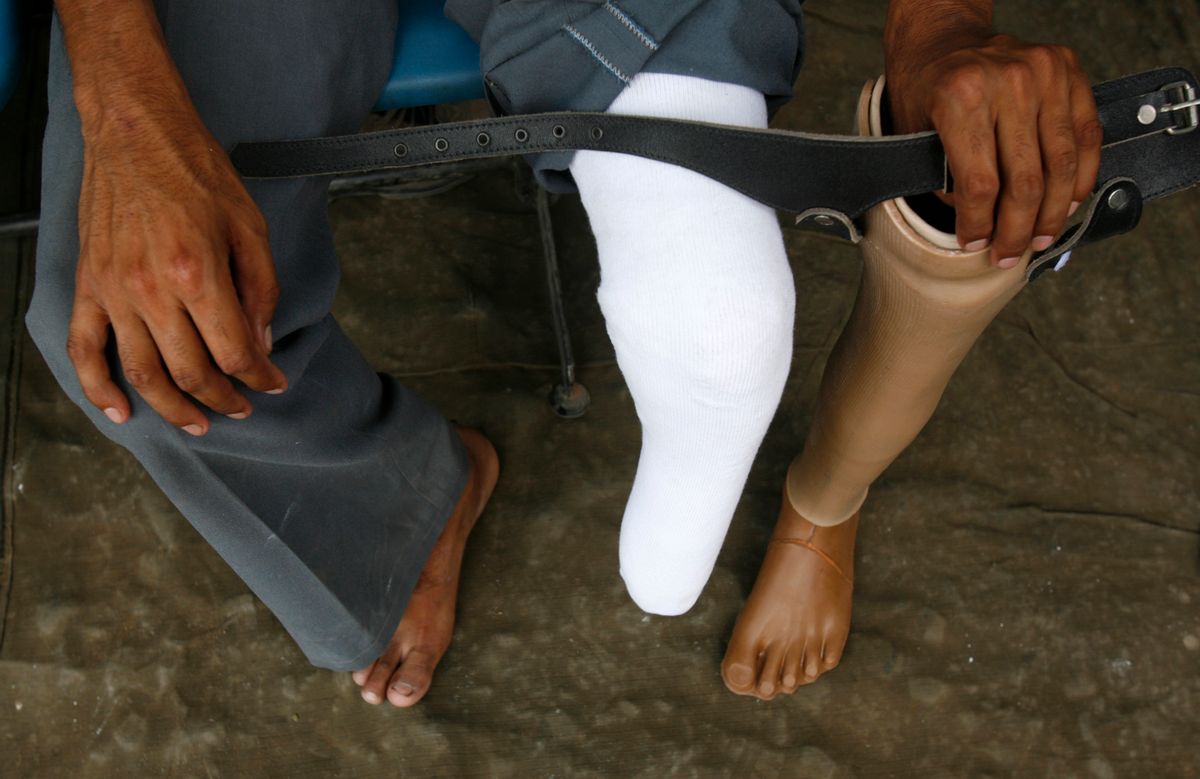 Mohammed Aslam, a Kashmiri Muslim who lost his left foot in a landmine explosion, holds an artificial limb during a camp organised by the Indian Army in Srinagar June 25, 2007. Apart from launching combat operations against rebels in the Himalayan region, the Indian army is organizing medical camps and other activities for the welfare of the locals, especially needy and poor, an Indian army officer said. REUTERS/Fayaz Kabli (INDIAN-ADMINISTERED KASHMIR) (Reuters)
--

Many people are troubled that Barack Obama flew to Oslo to receive the Nobel Peace Prize so soon after escalating the war in Afghanistan. He is now more than doubling the number of troops there when George W. Bush left office.

The irony was not lost on the president, and he tried to address it in his Nobel acceptance speech. "I am responsible for the deployment of thousands of young Americans to battle in a distant land," he said. "Some will kill. Some will be killed. And so I come here with an acute sense of the cost of armed conflict -- filled with difficult questions about the relationship between war and peace, and our effort to replace one with the other."

Granted, there's a gap here between the rhetoric and the reality. But there's always been something askew about Nobel Peace Prize, in no small part because it's given in the name of the man who invented dynamite, one of the most powerful and destructive weapons in the human arsenal.

It was rumored that after Alfred Nobel brought his version of Frankenstein's creature into the world, he was torn by guilt, his shame said to have intensified when a French newspaper prematurely ran his obituary with the headline "The Merchant of Death Is Dead." The article vilified him as a man "who became rich by finding ways to kill more people faster than ever before."

What's more, until the end of his life he corresponded with a woman named Bertha von Suttner, who had briefly worked as his secretary. Many believe that Nobel was moved by a powerful antiwar book she had written titled "Lay Down Your Arms." Whatever his reasons, when his will created the Nobel Prizes he specifically included among them a prize for peace. Von Suttner became one of its first recipients.

After Nobel's death, events turned grim, as if to mock him further. The arms race exploded beyond anything he could have imagined. From the coupling of science and the military came ever more ingenious weapons of destruction that would take even more lives in ever more horrible ways.

One of the most insidious was the land mine, that small, explosive device filled with shrapnel that burns or blinds, maims or kills. Triggered by the touch of a foot or movement or even sound, more often than not it's the innocent who are its victims -- 75 to 80 percent of the time, in fact.

As a weapon, variations of land mines have been around since perhaps as early as the 13th century, but it was not until World War I that the technology was more or less perfected, if that can be said of weapons that mangle and mutilate the human body, and their use became common.

The United States has not actively used land mines since the first Gulf War in 1991, but we still possess some 10-15 million of them, making us the third-largest stockpiler in the world, behind China and Russia. Like those two countries, we have refused to sign an international agreement banning the manufacture, stockpiling and use of land mines. Since 1987, 156 other nations have signed it, including every country in NATO. Among that 156, more than 40 million mines have been destroyed.

Just days before Obama flew to Oslo to make his Nobel Peace Prize speech, an international summit conference was held in Cartagena, Colombia, to review the progress of the treaty. The United States sent representatives and the State Department says our government has begun a comprehensive review of its current policy.

Last year 5,000 people were killed or wounded by land mines, often placed in the ground years before, during wars long since over. They kill or blow away the limbs of a farmer or child as indiscriminately as they do a soldier. But still we refuse to sign, citing security commitments to our friends and allies, such as South Korea, where a million mines fill the demilitarized zone between it and North Korea.

Twelve years ago, at the time the treaty was first put into place, the Nobel Peace Prize was jointly awarded to the International Campaign to Ban Landmines and to Jody Williams, an activist from Vermont who believes that by organizing into a movement, ordinary people can matter. She proved it, despite the stubborn refusal of her own country's government to do the right thing.

Last week, Williams condemned America's continuing refusal to sign the treaty as "a slap in the face to land mine survivors, their families, and affected communities everywhere."

The Nobel Committee said that part of the reason it was giving the Peace Prize to President Obama was for his respect of international law and his efforts at disarmament. And twice in his Nobel lecture, the president spoke of how often more civilians than soldiers die in a war. Then he said this:

"I believe that all nations, strong and weak alike, must adhere to standards that govern the use of force. I, like any head of state, reserve the right to act unilaterally if necessary to defend my nation. Nevertheless, I am convinced that adhering to standards strengthens those who do, and isolates -- and weakens -- those who don't."

And still the land mine treaty goes unsigned by the government he leads. Go figure.