Scandal-ridden Italian premier hit with a statuette during rally 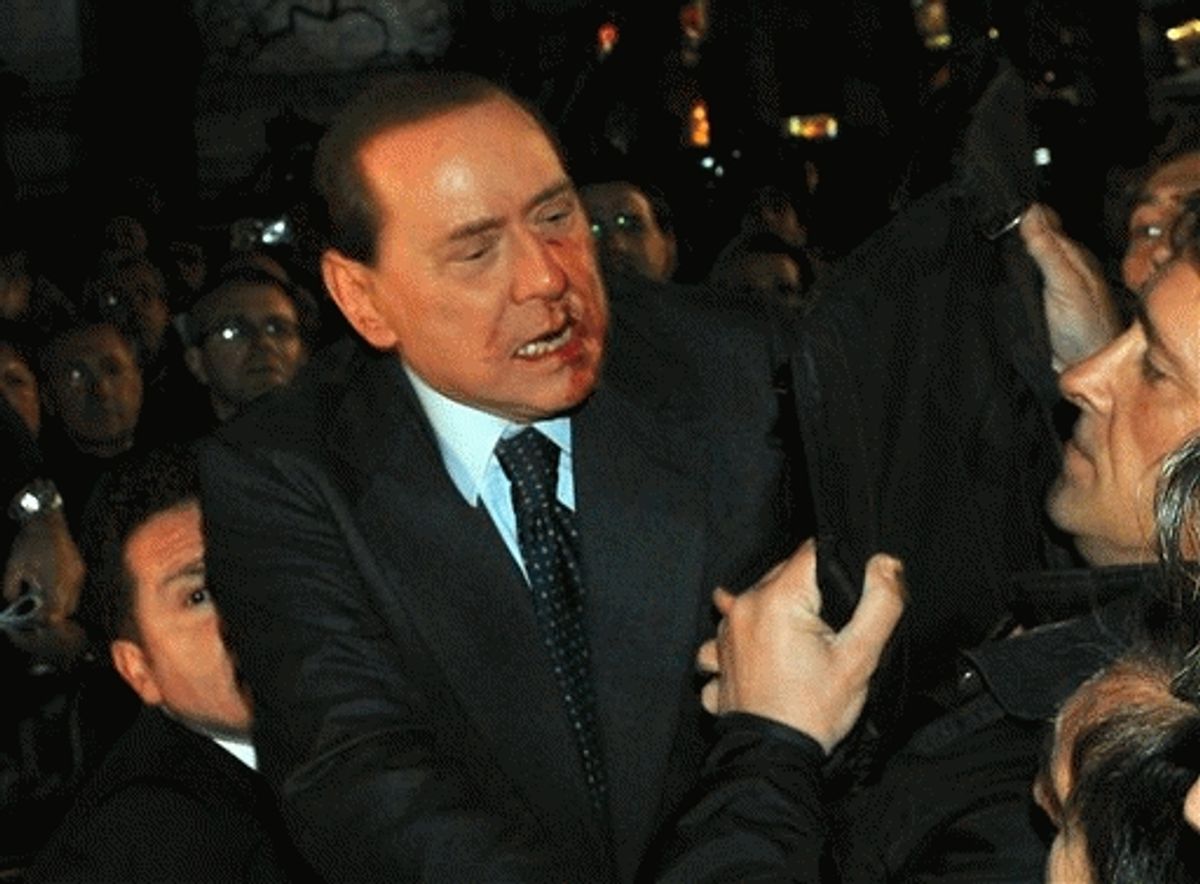 This image made available by the Italian Premier's office shows Italian Premier Silvio Berlusconi after an attacker hurled a statuette at him at the end of a rally in Milan, Italy on Sunday.
--

An attacker hurled a statuette at Italian Premier Silvio Berlusconi, striking the leader in the face at the end of a rally Sunday and leaving the stunned 73-year-old media mogul with a broken nose and bloodied mouth.

Police said the 42-year-old man accused of attacking Berlusconi as he signed autographs in Milan was immediately taken into custody. The Italian leader was rushed to a hospital where he was being held overnight.

The attack occurred at a time when Berlusconi, one of Italy's wealthiest men, is embroiled in a sex scandal, a divorce case with his wife and public protests demanding his resignation.

TV showed the stunned leader with blood under his nose, on his mouth and under one eye as he was lifted to his feet by aides after Sunday's attack. He was hustled into the back of a car, but he immediately got out, apparently to show he was not badly injured.

But Berlusconi suffered a "small fracture" of the nose, two broken teeth and an injury to the inside and outside of his lip, said Paolo Klun, chief spokesman for Milan's San Raffaele Hospital.

"He wanted to go home right away, but he is being held as a precaution" for overnight observation, Klun said. The premier suffered "a significant bruising trauma from this blunt instrument that was hurled at him."

Police first said it appeared the assailant had punched Berlusconi in the face while clutching a souvenir statue of Milan's Duomo, or cathedral with gargoyles that symbolizes the city. But state TV later showed a video, somewhat blurry, of what appeared to be the attacker's hand coming close to Berlusconi's face while holding the statue, then letting go of the object at the last minute as it hit the premier's face.

Berlusconi was "very shaken and demoralized," Klun said. "He didn't understand very well what happened to him."

Immediately after the attack, the premier, after getting out of the car and without saying a word, was pulled back into the vehicle by bodyguards.

The attack occurred after Berlusconi had just finished delivering a long, vigorous speech at the rally to thousands of applauding supporters from his Freedom People party in the square outside the cathedral at about 6:30 p.m.

Officials at Milan's police headquarters said they didn't immediately know what the miniature Duomo statue was made of.

Berlusconi's spokesman, speaking by telephone from the emergency room from San Raffaele hospital where the premier was taken, told Sky TG24 TV that doctors had decided to keep Berlusconi in the hospital overnight for observation. "We'll see what the doctors say tomorrow morning," spokesman Paolo Bonauiti told Sky. The exams of his jaw area included a CT scan, Bonaiuti said.

Police identified the man they were questioning as Massimo Tartaglia, 42. They said Tartaglia didn't have any criminal record but had suffered psychological problems in the past.

Defense Minister Ignazio La Russa told reporters he ran to help police hustle the man away from the scene of the attack "to keep him from a possible lynching from the crowd."

The assailant "was a man who had mixed in with the people who were applauding (Berlusconi), shaking his hand," La Russa said.

The attack occurred at a difficult political time for Berlusconi, who has been plagued by scandals.

On Dec. 5, tens of thousands of Italians fed up with the premier marched peacefully through Rome to demand his resignation.

The demonstrators expressed dismay over what they see as the businessman's conflict of interests, citing repeated government-backed laws they contend were tailored to help shield Berlusconi from prosecution in cases involving his media, real estate and sports empire. Berlusconi claims the laws benefit all citizens.

Berlusconi's wife is divorcing him after complaining about his infatuation with young women. A southern Italian businessman has told investigators he procured some 30 attractive young women for parties and dinners at the premier's Rome residence and Sardinian villa. Among the guests was a high-end prostitute who claimed she slept with Berlusconi. The premier has denied ever paying for sex.

Berlusconi has steadfastly denied any wrongdoing and blames his judicial woes on prosecutors he claims sympathize with the opposition left. Several of the cases either ended in acquittal or were dropped when limitation statutes expired. Others are pending.

On Sunday, Italian President Giorgio Napolitano condemned the "grave and unusual gesture of aggression" against Berlusconi. In a statement, the head of state renewed his plea that conflicting political points of view be expressed "within the limits of responsible self-control" and while "preventing and heading off every impulse and spiral of violence."