These gloves let you get medieval in the kitchen 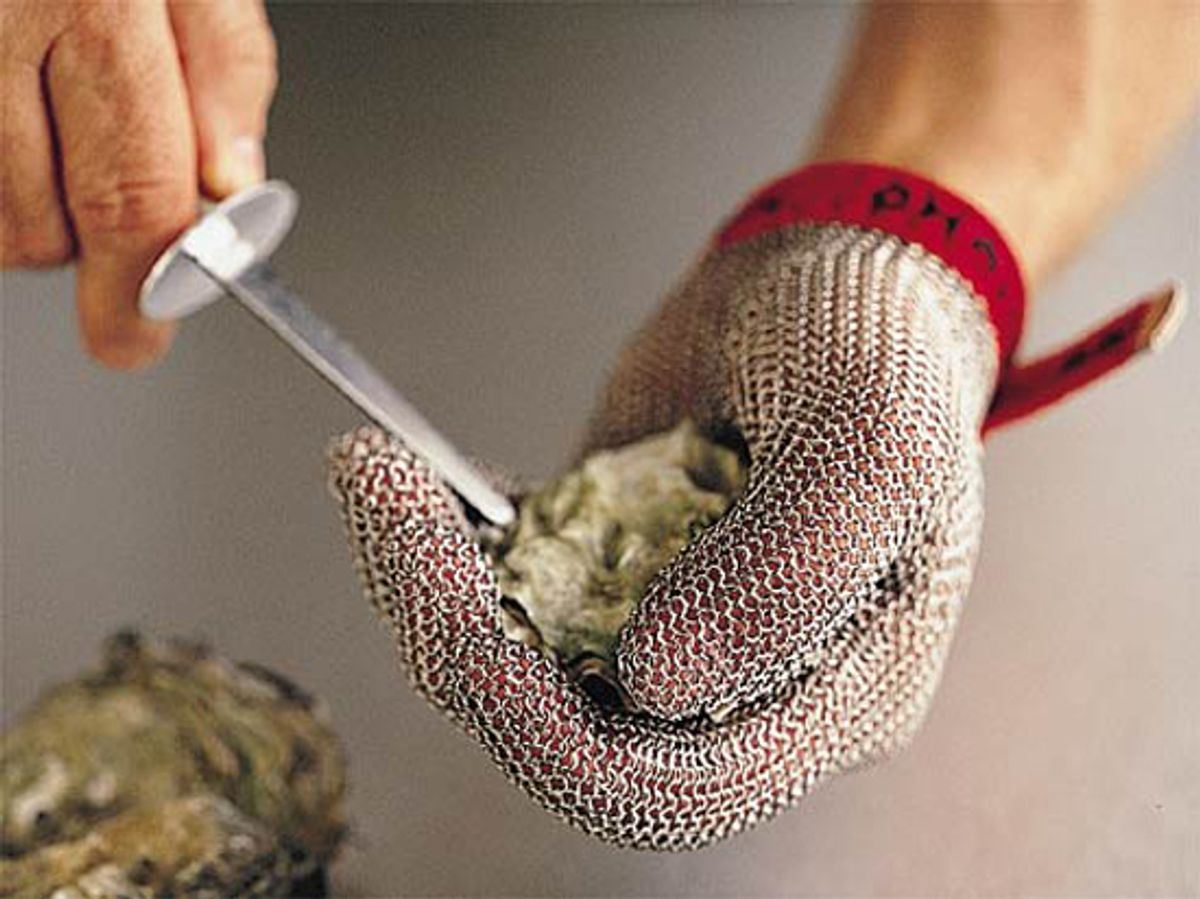 Sometimes, products are interesting simply because they are unusually useful. And, because they achieve that result in an unexpected way. This cooking glove is like that. It solves a very real problem -- in a way that you'd (or at least, I'd) never have imagined.

We all have issues with cutting things in the kitchen. Scary. We try to figure out how to maneuver the knife, how to adjust our grip, so as to minimize the risk. Too often, however, blood flows.

It's actually harder to protect yourself as you get more serious about cooking. When I was young, I was taught to cut so the motion of the knife is away from your hand. But I've now come to understand that you're actually supposed to cut toward your hand, because it's more accurate -- you can better guide the knife. Unfortunately, you are guiding it right toward your own flesh. People who cook a lot, and love cooking, commonly lose parts of fingers. If you meet a serious chef, don't look closely at the hands.

As I became sensitized to this issue, I became more and more aware that there is not a widely used solution. I have a number of friends who are serious cooks. They have all sorts of gadgets in their kitchens. But for real protection against bad cuts? Nothing. Except health insurance.

This is the answer. This is a cook's glove -- made for precisely this purpose, to protect hands against cutting. It was actually designed to protect hands for oyster shucking -- involving, obviously, a very sharp instrument, and very high levels of force, which means that a slip entails a quick hospital trip. But, it has a much wider application. It can be used in any kitchen task where cutting occurs, including the (very treacherous) early morning, sleep-deprived bagel-slicing.

It's made of chain mail. As in the Middle Ages. Real, small-link, stainless steel, non-rusting chain mail. It's carefully crafted for comfort and performance (sorry, that sounds like a car ad, but it's true), and it has a leather wrist band for closure. And it's quite beautiful.

It turns out that medieval chain mail still, today, offers a unique combination of flexibility and laceration protection that's never been bettered. The hundreds (thousands? I haven't counted) of small links in the glove conform to any human movement/contortion (more on that to come, a little later). You cannot penetrate them, from any angle, with a blade, or even with the point of a blade.

To me, this is one of the more unexpected products in the Salon Store. It isn't the result of a high design exercise by a schooled European designer. Yet, in terms of elegance and thoughtfulness, it's every bit as interesting. It literally repurposes an ancient invention.

That was, after all, why chain mail was invented. The whole point was to protect against incursions from sharp blades and points of blades. So now, this ancient legacy, with its dark history protection in truly awful, barbaric fighting -- becomes civilized and protects against slips of the French Chef's hand.

This particular glove is a very high-quality, lovely piece. It will last a lifetime. It's very comfortable to wear. You might even decide to wear it out in the evening (see our wonderful Michael Jackson book, "Before He Was King"). In any event, a wonderful unexpected gift for anyone you know who cooks. Or, honestly, for anyone you know who spends time in the kitchen and is clumsy.

It's possible, of course, that an overly serious chef might view it as wimpy or implying a lack of confidence. I'd turn a blind eye to this possibility. It is, after all, a heartfelt gesture of support and concern.

For me, there was another layer of amusement in finding the chain mail glove. Both of my sons went through that phase where they loved medieval lore. Knights, jousting, castles, etc. As a consequence, we used to go to medieval faires (as they call themselves). They come in greater and lesser versions, and are held all over the United States, mostly in the fall. They draw together an interesting crowd of folks, most of whom have normal lives -- teachers, cops, lawyers -- but, who also have a second life, as medievalists. They dress in period clothes and ... chain mail.

You wander over many, many acres, watching people forge weapons, sword-fight, joust and engage in a whole range of activities drawn from the ancient court. There are stages and jesters and contests and medieval rides. By the evening, after a lot of mead-drinking, it's all pretty bleary, and sometimes ends with a truly weird medieval rock concert.

So, from this, I had actually become aware that you can buy a range of real chain mail outfits, made by serious modern craftsman, using medieval methods. Replicas of the real thing, worn by serious adults, in re-creations of ancient combat. At the faires, you can actually, sometimes, watch it being made, which is pretty cool. I just didn't know about the glove and cooking, which kind of completed the picture.

And this leads to one final chain mail fact, in terms of chain mail and contortions (a term I said that I would revisit). Due to my attendance at the faires, I also became aware that a lot of the medievalist folks are club-goers. And not a few are fetishists. So, you can buy chain mail club wear -- and fetish wear.

We are not featuring chain mail club wear or fetish wear at the Salon Store this holiday season. I suggested it, but I was overruled. If you would like us to feature these items, please make your views known to me. I will be glad to plead my case once again with our CEO.