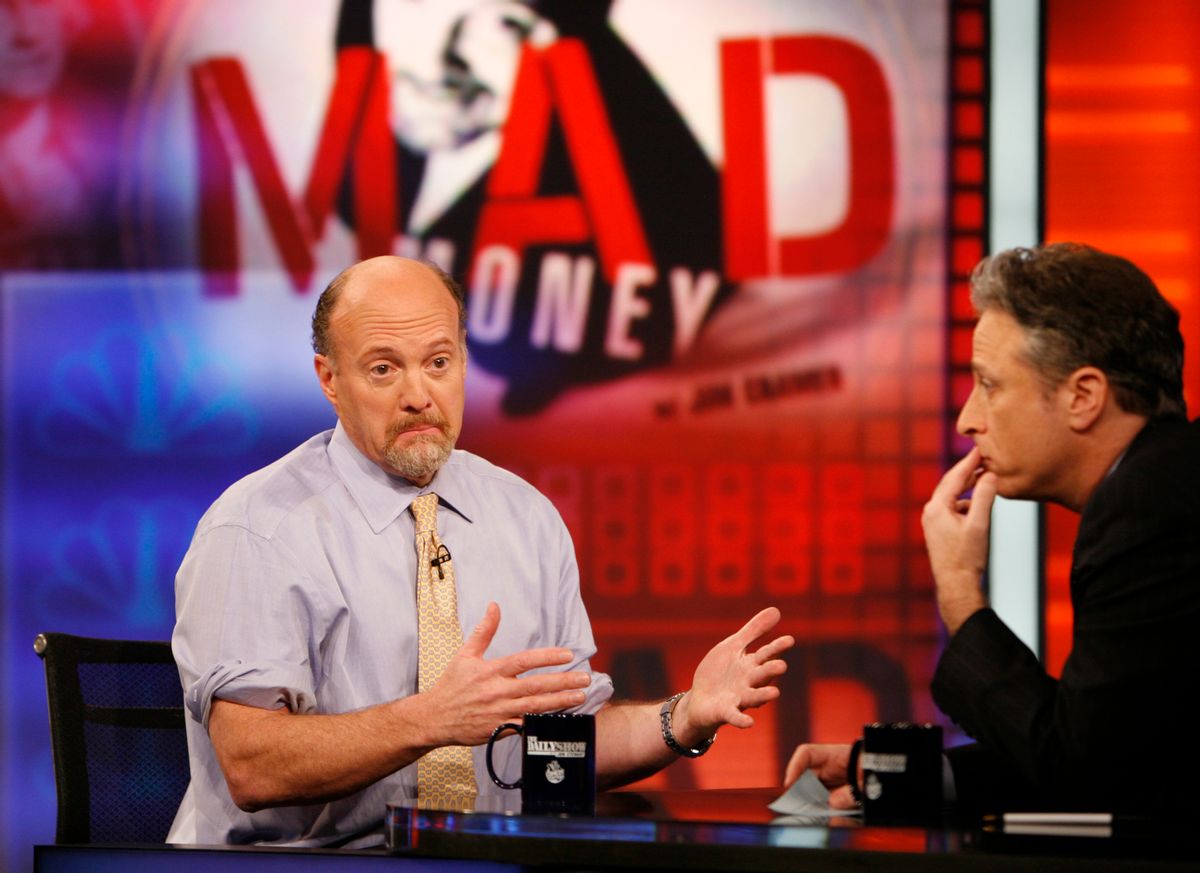 It seems so long ago now, after a summer and fall of town hall healthcare rage and Birther conspiracies and South Carolina GOP politician kookiness. But back in the spring, for a few weeks in March, CNBC's "Mad Money" investment advice dispenser Jim Cramer solidified his own nomination for the Year in Crazy by running amok in a distraught state of fear and trembling spawned by a downward-spiraling stock market. Of course, Jim Cramer's shtick is crazy -- his show isn't named "Mad Money" for nothing. His gimmick is to froth and gesticulate and gibber, spewing out buy and sell recommendations like a nuclear-powered popcorn popper. But on March 3, when the stock market was testing the 7,000 barrier, he appeared on the "Today" show in a state of anger that did not appear feigned. Nearly shaking with rage, eyes bulging, he laid into the new president.

"We have an agenda in this country now that I would regard as being a radical agenda. We had a budget come out that put a level of fear in this country that I've not seen ever in my life and I think that changed everything. This is the greatest wealth destruction I've ever seen in my life by any president.

In ensuing days, Cramer opened up the heavy artillery. In a pitch for his show, he declared that "Government of, by, and for the corporation is perishing from the Earth [and that] our country is now run by a president and a Bolshevik-leaning Democratic Party that are unfavorable to stocks and the people who own them." He compared Obama's cap-and-trade plan to limit greenhouse gas emissions to Joe McCarthy's House Un-American Activities Committee.

In the weeks that followed, Cramer was called out by White House press secretary Robert Gibbs and then humiliated by Jon Stewart with a series of clips and a riveting half-hour one-on-one interview. But then, suddenly, he disappeared from the headlines, for a very simple reason. He had been utterly, incredibly, irredeemably wrong. Because almost immediately after his crazy outbursts, the U.S. stock market went on a sustained bull run that has continued more or less right up until the present day. Lenin need not worry. If Obama had any aspirations at radical Bolshevik wealth-destruction, he failed miserably.

Today, Obama's critics on the left savage the president because they hunger for a little more in the way of Bolshevik wealth redistribution than they have been getting, while his opponents on the right have picked up Cramer's socialism critique in a bizarre reality-distortion field that ignores everything that has actually been done to stabilize the country in as market-friendly a way as possible, with a second Great Depression looming right around the corner. Cramer doesn't seem too crazy anymore, now that a far more berserk contingent rampages across the media landscape every day. But the important thing to remember about Cramer is not only that he had his moment in the crazy sun last March. It's that he was just plain wrong. And yet he's still handsomely rewarded for spewing stock market tips and political commentary. That's what's really crazy.