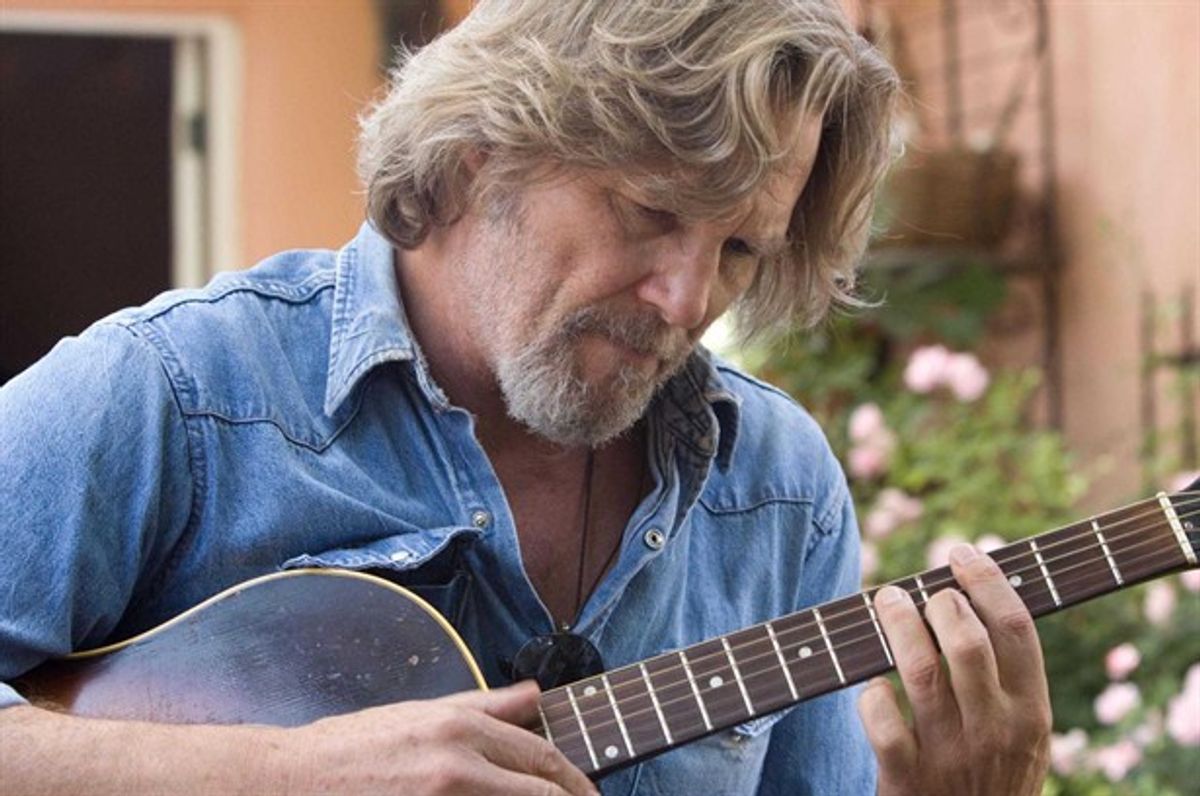 Nothing much happens in Scott Cooper's debut film, "Crazy Heart." There's no fast cutting, no motion-capture aliens, no excessively complicated plot -- in fact, there's barely a plot at all. But the movie offers a simple, unadorned landscape for actors to live in, and watching it, I was struck by how few filmmakers today, even when they're working with extremely small budgets, are willing to risk that kind of simplicity: For one thing, so many pictures of modest means (not to mention expensive ones) make a feature of their noticeably hand-held camerawork; sometimes it seems that young filmmakers believe the camera has to be moving every minute, lest the audience get bored and walk away.

The hand-held camera isn't an evil by itself. But the fact that I can't remember noticing the vagaries (if there were any) of the camera movement in "Crazy Heart" says something about Cooper's approach to working with actors. Because they're what I remember most about "Crazy Heart." Jeff Bridges plays Bad Blake, a hard-drinking country singer who rolls from town to town in his reliable, if distinctly shabby, '78 Suburban. (As the movie opens, he's pulling up to his next gig, at a bowling alley. One of the first things we see him do is empty his pee bottle in the parking lot.) Maggie Gyllenhaal is Jean, an aspiring journalist to whom he's granted an interview that he assumes will be cursory.

Blake prides himself on his reliability: He shows up for gigs, all right -- the variable is that no one can be sure what state he'll be in. Blake used to be part of a much bigger act. He made his name playing with a guy named Tommy Sweet (Colin Farrell) who went on to become a superstar, and Blake doesn't like to talk about what went wrong between them. When Blake meets Maggie, she annoys him at first, not least because she politely ventures a few questions about what happened with Tommy. But before long Blake realizes that he just likes talking to her. And not long after that, he finds himself going out of his way to see her, even though she, as a single mom who's obviously seen her share of losers, is understandably cautious about getting involved with a guy who drinks bourbon for breakfast -- even if he also knows how to make biscuits.

I know what you're thinking right now: You've heard this story a thousand times before. And I know why you're thinking it: Because I've heard it a thousand times before. It doesn't help that the unvarnished plot details of "Crazy Heart" make it sound like one of those pictures with a painstakingly homespun, Sundancey gleam. (The picture was, incidentally, intended to open Sundance 2010. The company that ended up purchasing it, Fox Searchlight, decided to hustle it into theaters in the hopes of getting an Oscar nomination for Bridges.)

But "Crazy Heart" is one of those pictures that's more valuable for everything it doesn't do. Some of the plot turns are fully predictable, though the story also refuses to go into some of the constricting corners you're sure it's headed for. The script is based on Thomas Cobb's novel, which Cooper adapted; Cooper, an actor himself (and also a country music fan), had originally hoped to make a film of the Merle Haggard story, but the rights were unattainable. That helps explain why "Crazy Heart" is essentially an unapologetic character sketch, a map of the godforsaken territory in which the clichés of what it means to be a country singer intersect with believable human suffering, and pleasure too.

"Crazy Heart" is exceptionally modest in both its ambitions and its scope, which may be why I've already heard some fellow critics grumbling that there's no there there. But again, the actors are the destination themselves. Gyllenhaal and Bridges are marvelous together, playing their characters' cautious affection for each other as an alluring winding path that's actually laden with minefields. Gyllenhaal is an understated, guileless actress -- she always lets the role come to her instead of going after it with gusto. Her speaking manner is casual, and as an actress she's often soft-spoken in a way that hints at deep personal shyness. But there's also something resolute and unflinching about her, and here the balance -- and conflict -- between her reserve and her steeliness is something to watch. Gyllenhaal has also rarely looked prettier. The director of photography here, Barry Markowitz, lights and films her in a way that captures her unstudied, unhurried glamour -- she has the vibe, the lived-in beauty and ease, of an old silk kimono accidentally hanging off one shoulder.

Farrell and Robert Duvall, in small but potent roles, help nudge the story into its admittedly random shape. But they're wonderful to watch. Duvall, in particular, has a fine, glowing moment in which he sings a scrap of a song by the great singer-songwriter Billy Joe Shaver (who has appeared in several of Duvall's films including the 1996 "The Apostle").

The original music here is by T-Bone Burnett and Stephen Bruton, and Bridges and Farrell do their own singing, gamely and ably -- they're believable as old-time country-music singers, relics from the days when people made records without excessive studio enhancements. And it's simply pure pleasure to hear Bridges sing in a movie role: His voice has a rough-edged, coal-powered warmth; it's the kind of voice you couldn't turn your back on if you tried, and it's representative of the beguiling, seductive challenge of the performance overall.

Blake has the look of someone who's slept in his clothes and lived in his skin. Bridges plays him as a guy who's got that Sunday morning comin' down on him over and over again. But what Bridges captures that a lesser actor might miss are the sparks of joy behind the dissolution: At one point, as Jean interviews him in his crummy motel room, he tries to steer her off a topic -- Tommy Sweet, as a matter of fact -- that he doesn't feel like pursuing. He looks at her and, without even a firefly-flicker's worth of bullshit, says, "I want to talk about how bad you make this room look."

Maybe there's a cliché, or at least a degree of truck-stop-Romeo calculation, buried in that seduction line. But as Bridges says it, that's not what it's about: For him, the line is a spontaneous leap of poetry, a strange and slightly awkward sentence that doesn't even have the shelter and the protection of a song around it. Bridges is one of those acknowledged great actors who's been praised so often that we're almost sick of hearing it. But his performance in "Crazy Heart," for my money the finest male performance of the year, reels us right back to understanding why: Instead of dressing up words, he sends them out naked. It's everything he subtracts that matters.