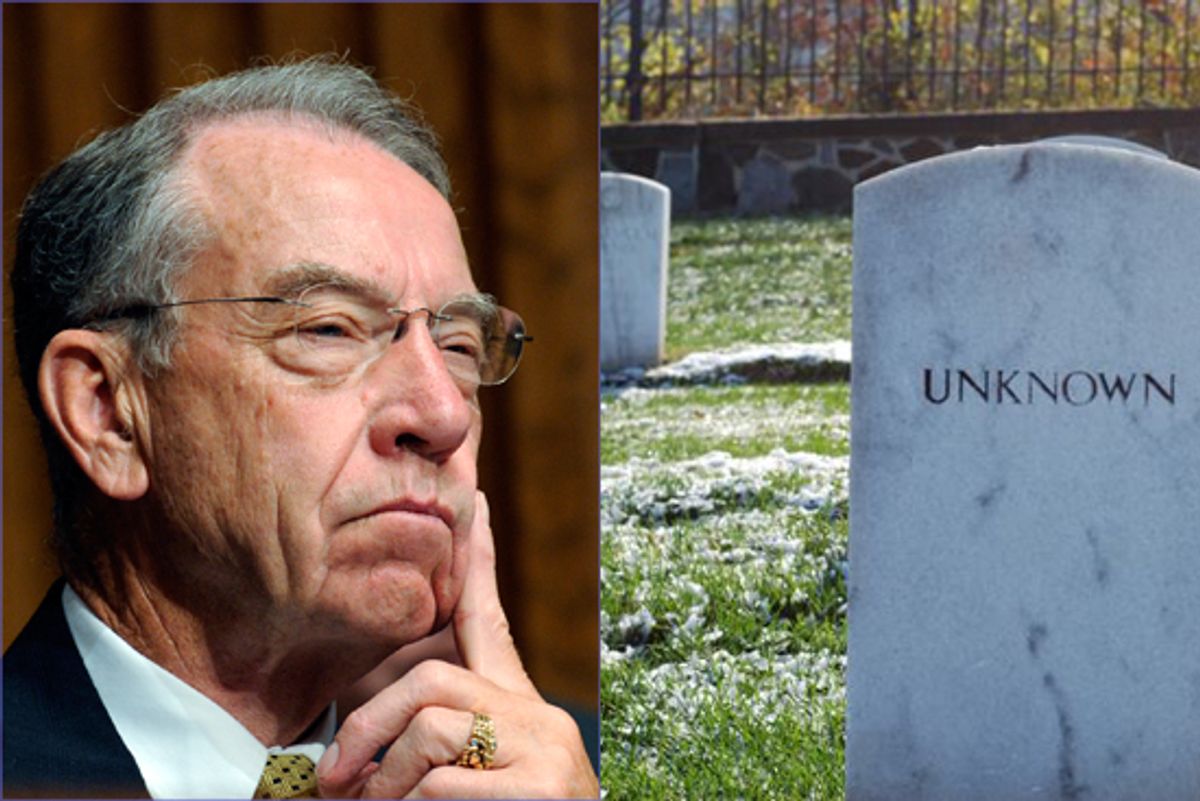 A key senator is calling for increased oversight and coordinated government investigations of Arlington National Cemetery in the wake of a series of burial mix-ups and other scandals exposed by Salon.com.

In a Dec. 15 letter, Sen. Chuck Grassley, R-Iowa, asked Lt. Gen. Steven Whitcomb, the Army inspector general, "If they are not already under review, I ask that these and any other new allegations be assigned to the appropriate office for investigation."

Grassley specifically referred to the most recent Salon story, which described how an urn containing cremated remains of unknown origin had apparently been dumped in Arlington's dirt landfill, recovered in 2002 and then buried as an unknown soldier. "These are very troublesome issues, indeed," Grassley wrote about that article.

In the letter, Grassley disclosed that there are at least seven separate ongoing or nearly completed government investigations into troubling allegations involving the cemetery. "These run the full gamut from alleged false official statements, contract fraud, whistleblower reprisal, discrimination, to improperly marked graves to name a few," he wrote. Grassley asked that the Army inspector general "coordinate and oversee" those separate investigations.

Grassley has long been a champion of government whistle-blowers from the FBI to the Food and Drug Administration. His Web site chronicles some of these efforts.

Some military sources have privately expressed worry to Salon that the Army inspector general might not execute a vigorous, independent and thorough review of the myriad problems at the cemetery. In his letter, Grassley tackles this issue head-on. "You will note that I am providing a copy of this letter to [Department of Defense Inspector General Gordon Heddell]," Grassley warned. "If at the conclusion of this process, I feel the Army's investigative and administrative process is not totally independent, I may refer these matters to the DOD IG for further review and consideration."

Grassley added that, "Those who are responsible for caring for the remains that are entrusted to this holy place must treat their charges with unfailing honor and respect."

Grassley's letter follows an editorial in the Military Times newspaper on Dec. 7 calling for a congressional investigation into the problems at Arlington, noting burial fiascoes first explored by Salon.com. According to that editorial, "When it reconvenes next year, Congress needs to ask tough questions about what's going on at Arlington and restore order to operations at the nation's most hallowed burial ground