3. Minnesota gave us Al Franken as well as this moonbat, who promised to slit her wrists to stop healthcare reform 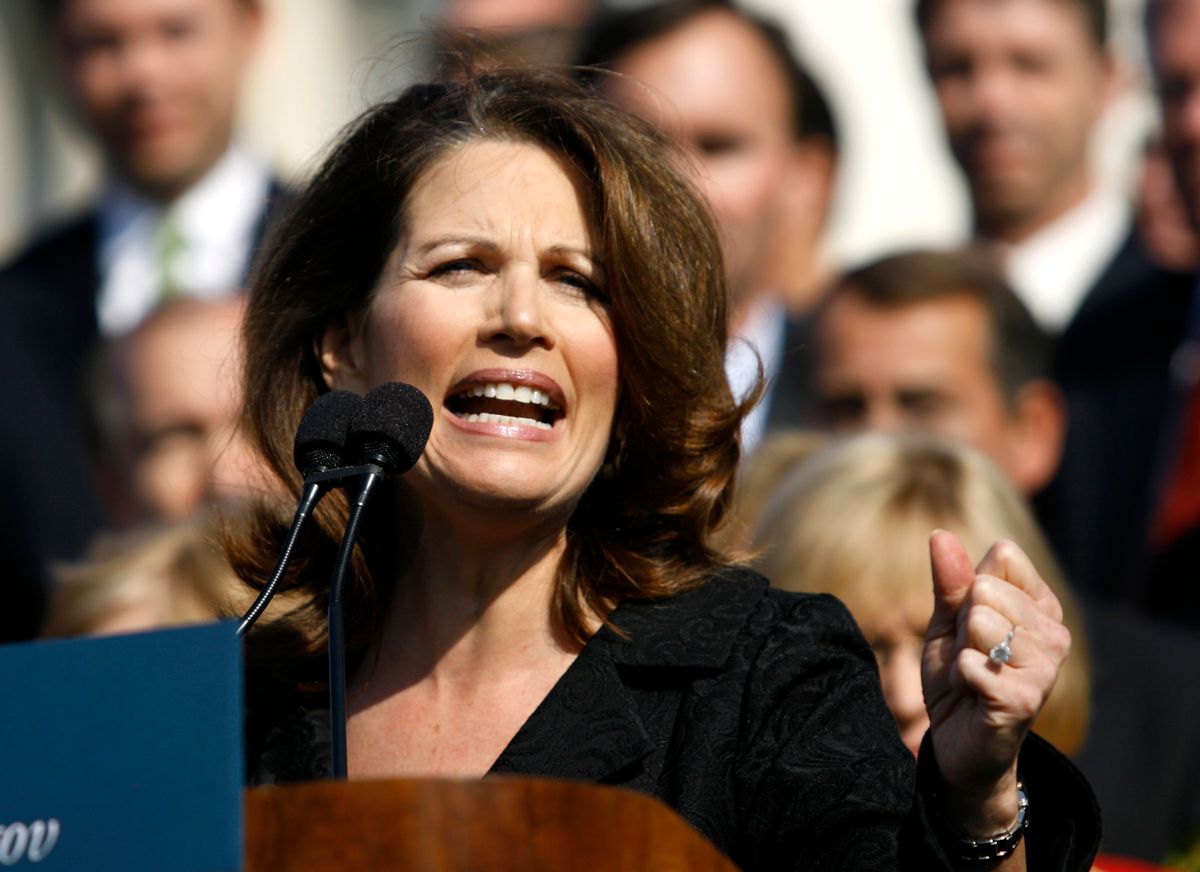 If 2009 goes down in history as the year when ideology finally pinned fact-based politics to the floor and dribbled a loogie over its face, then the people of Minnesota's 6th Congressional District will have proven themselves ahead of the curve. After all, they first elected Michele Bachmann to Congress back in 2006. And get this: They reelected her in 2008. Take that, evolution.

Forget truth. Hell, forget truthiness. The era of the Birthers is Bachmann's epoch, because the bar is so low. Indeed, there is no bar. Just as Glenn Beck can portray President Obama as a follower of Mao Zedong simply by connecting the two on a blackboard with chalk, Bachmann can go onto the House floor, spout out any odd claptrap that comes to mind, and still get reelected.

Bachmann thinks more carbon dioxide is a good thing, since it is a "natural byproduct of nature," just like syphilis, I suppose. She has warned that AmeriCorps could lead to "re-education camps" for young people; she suggested armed revolt to stop climate change legislation (urging her supporters to be sure they're "armed and dangerous on this issue of the energy tax because we need to fight back"). She keeps hinting that there is some creepy, sinister plot behind the 2010 Census.

Bachmann isn't just crazy, she's crazy's frothy-mouthed cheerleader. Take her speech on healthcare reform last August in Colorado, at a time when some Americans had lost perspective, composure and in some cases all grip on the facts during town hall-style meetings across the country. Bachmann happily stirred the big pot of lunacy. "This cannot pass!" she shouted at her Colorado audience. "What we have to do today is make a covenant, to slit our wrists, be blood brothers on this thing. This will not pass. We will do whatever it takes to make sure this doesn't pass."

Bachmann, of course, came to national attention just before the 2008 presidential election, when she declared on MSNBC's "Hardball" that she was "very concerned that [Obama] may have anti-American views." She went on to encourage a media and congressional investigation into the anti-American views of all of her enemies. Although her opponent, Elwyn Tinklenberg, began to surge in the polls, that November she clung to her seat. The people of Minnesota's 6th District will get to have a third referendum on crazy in 2010, when Bachmann will face one of two Democrats: physician Maureen Reed or state Sen. Tarryl Clark. Unbelievably to the rest of the world, Bachmann's two-year jag of crazy seems to have strengthened her hold on her seat, but it's still possible she'll step beyond the realm of orthodox, increasingly acceptable right-wing crazy into a new crazy frontier that could cost her politically.

Possible, but not likely.