That anti-soda ad is way gnarly ... but will it work?

A commercial makes sugary drinks stomach-churning, but a food psychologist says it won't win the war on obesity 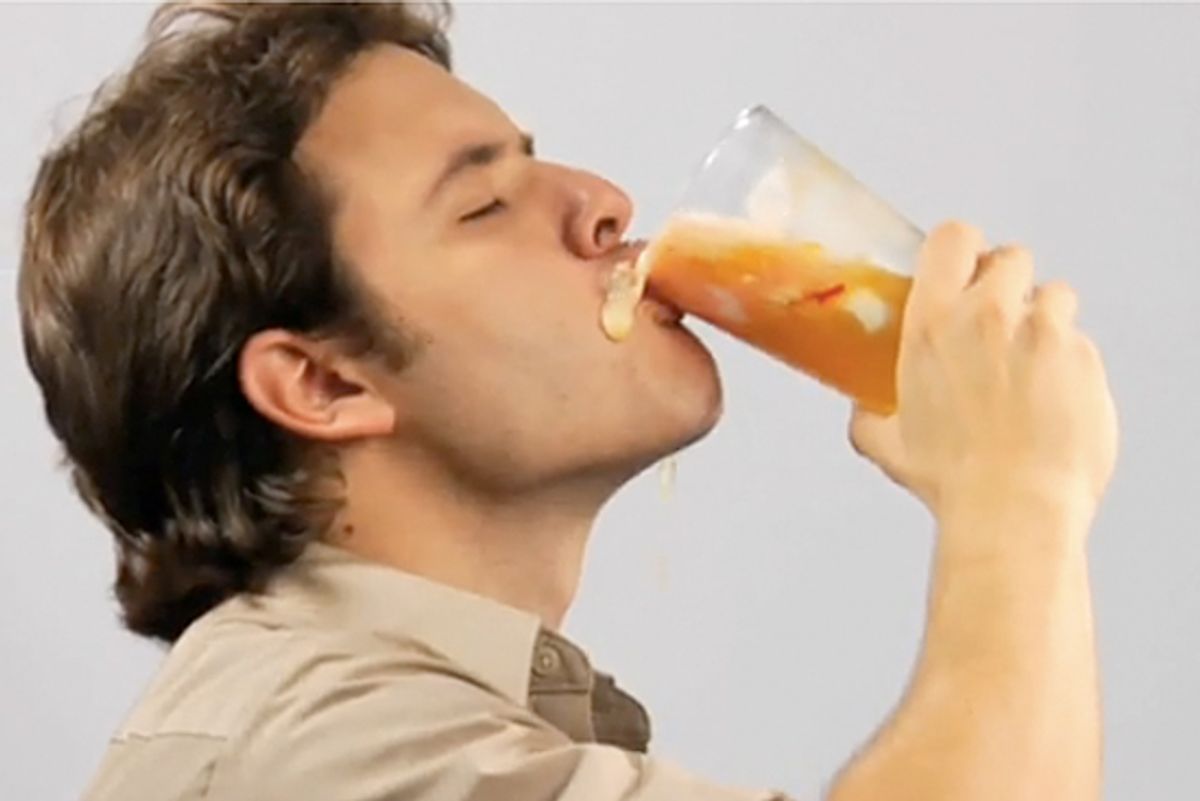 I'm pretty sure I lost weight yesterday because of the New York City Department of Health's new anti-soda ad. I mean, screw soda -- the sight of cellulite dribbling out of that dude's mouth meant I wasn't going to keep any food down.

That horror means something, I think. A friend of mine once got so sick on whiskey that 40 years later, the scent of brown liquor still makes him shudder. And I can clearly remember the smell of the Chef Boyardee I tried to eat when I was a kid, wishing to die from the flu, and it makes me deeply unhappy. So can this ad succeed in forcing people to make the emotional connection between drinking soda and being subjected to something out of "Saw 7"?

I spoke with Brian Wansink, author of "Mindless Eating" and director of Cornell's Food and Brand Lab, where he does things like making bowls that slowly refill themselves to see how much soup a person will unconsciously eat if it's sitting in front of them.

Let's get right to it: Will this ad be effective?

Well, it's getting a lot of buzz, but it'll be most effective for the people who need it the least, people who are already very nutrition vigilant -- they'll be the ones talking about it. People with healthy lifestyles see something like that, and they all start talking about it like it's the coolest thing since the toaster.

But the people who need it the most are going to be the most dismissive. There's a segment of people in between who will respond to it, but as in a lot of these campaigns in the past, the effect is extremely temporary.

People's food habits are what they are because they like them. They might drink less soda today or tomorrow. But then they might forget about the message, or if they see it over and over, they'll become immune or dismissive of it.

OK, let's back up a little bit. Say you had a bad time with brown liquor and can never have whiskey again. How do we create associations with food that last?

Well, it's very fortunate that we do, first of all. It's evolutionary driven. The kind of person who ate sour berries and kept getting sick eating sour berries eventually died from eating sour berries. Let's say you get pneumonia and you had fried fish beforehand -- you'll be a long time from having fried fish again. It's your body thinking, "That almost killed me." But these aversions don't always last a lifetime. The taste for it might come back, depending on how much you liked the food beforehand. If you've never had it before, that's it. It's never going to happen.

We did a really cool study of WWII vets in the South Pacific, on whether they ate Chinese food 50 years after the war. The basic conclusion was that if people weren't in heavy combat, they could still like it. But if they did experience combat, they hated, hated, hated Chinese food even 50 years later, with the exception of one small group who liked Chinese food before going to war. Remember, this was in the '40s, so not very many people had had it, but those who did, could like it again. But if the first time you had it was with grenades thrown at you ...

But this ad can be pretty traumatic, even if not on that level. Why can't this ad create those kinds of associations?

To some extent, it's the visual thing. If you're a big lover of soft drinks, you won't suspend disbelief. You know how you can do that thing? "It's only a movie. It's only a movie. Because I like Coke." There isn't a powerful physiological connection, like what eating a bad piece of fish will produce. That's a real important part of this.

So is an ad campaign useless?

By itself, it will be pretty much useless. The memory trace of that ad might be strong, but it's going to be pretty short, and will be pretty easily overwhelmed by the fact that you're hungry.

So if this won't work, what would be effective?

So much goes back to what we do in our homes. We keep believing, "It's not me, it's the fast food industry, the soda industry, etc." But once a parent or nutritional gatekeeper realizes that they control 72 percent of what their family eats, then it can be like, "Wait, there're a lot of small things I can do." Put a fruit bowl out. Don't go to a cheesy chain, and order a salad instead of fries and ranch dressing.

It's tricky to imprint these influences. You might be a great nutritional role model, but your kids may rebel against you. So there's a balance you have to strike.