Why is Obama still protecting Lieberman?

He's not your friend, Mr. President 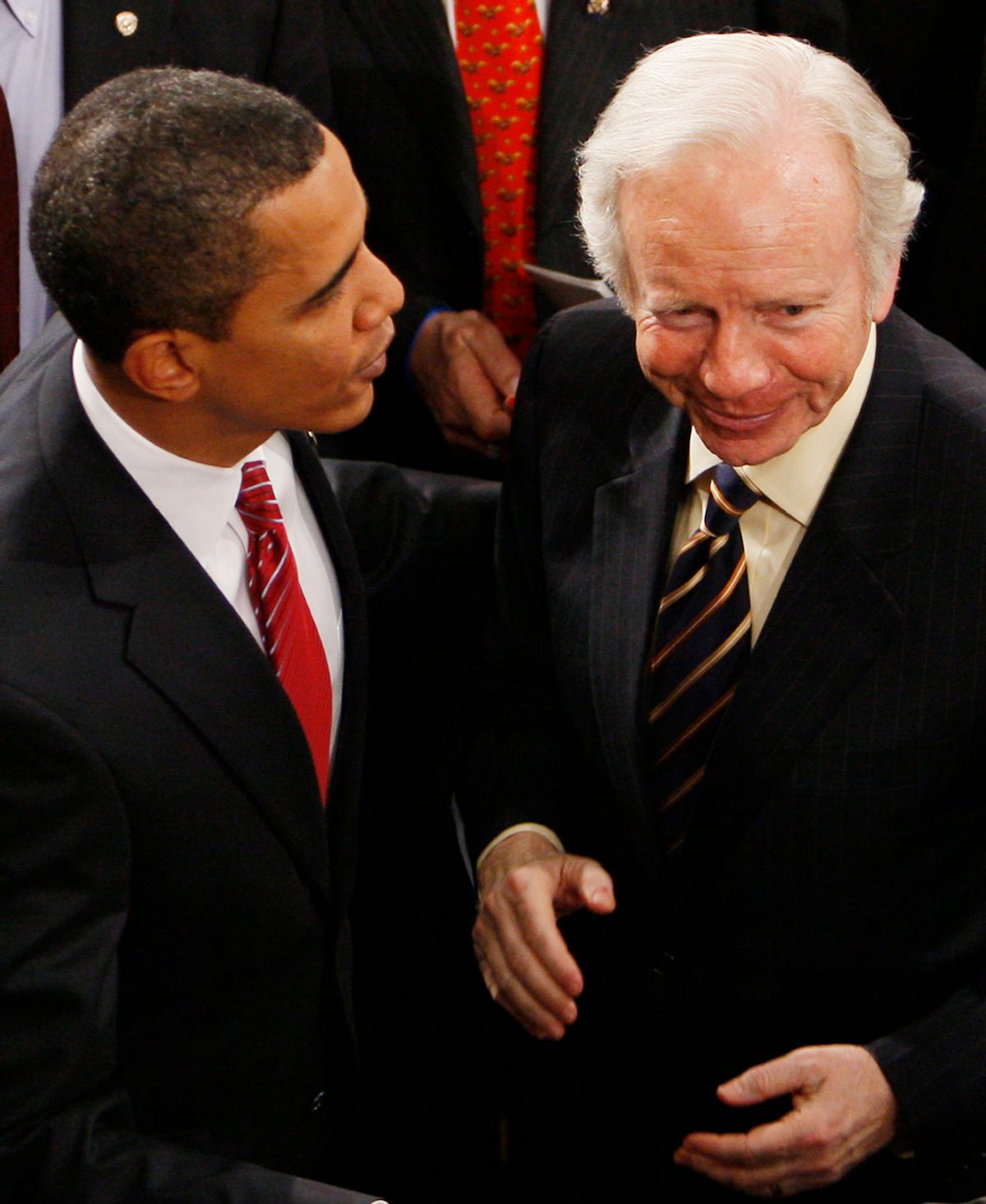 President Barack Obama and Sen. Joe Lieberman, I-Conn., greet each other after Obama's address before a joint session of Congress on Capitol Hill in Washington, Tuesday, Feb. 24, 2009. Lieberman has changed his tune on Obama. After campaigning for Republican John McCain in 2008 and attacking Obama as naive, Lieberman now in 2009 showers praise on the popular new Democratic president. (AP Photo/Charles Dharapak) (Associated Press)
--

I am beginning to see the inevitable healthcare "compromise" as the product of a political song and dance conducted by Democrats and Republicans solely to appease various constituencies within their parties -- and nothing else. Remarkably, The Onion accurately assessed the situation several months ago with the satirical essay "Congress Deadlocked Over How To Not Provide Health Care." The Onion "quotes" Nancy Pelosi in a very smart passage:

Both parties understand that the current system is broken," House Speaker Nancy Pelosi told reporters Monday. "But what we can't seem to agree upon is how to best keep it broken, while still ensuring that no elected official takes any political risk whatsoever. It’s a very complicated issue

Although I am proudly more cynical than most commentators, many early signs pointed to the possibility of substantial healthcare reform. Even though I predicted in October 2008 that the public would not likely tolerate the introduction of major spending programs during a weakened economy, opinion poll data told another story.

During the 2008 campaigns, voters clearly supported healthcare reform. Every credible candidate in both major parties advocated healthcare reform. Also, the Democrat candidates won convincingly, and they generally proposed broad reforms, including the formation of some type of "public plan" option that would extend government-sponsored healthcare to most uninsured individuals. Insured individuals could also opt for the public plan under certain circumstances. When healthcare debates began in Congress, most opinion polls showed strong support among voters for a public plan option.

Although voters held and continue to hold favorable opinions regarding healthcare reform, the mainstream news media has generally portrayed the public plan in very ominous terms. Also, conservatives have shamelessly distorted the terms of healthcare reform in order to scare voters -- particularly seniors.

Earlier this year, tense debates and even violence broke out at "town hall" meetings held to discuss healthcare reform. Moderate Democrats vowed to derail measures that included a public option. Liberals vowed to kill measures that did not include a public plan option. And it has become increasingly clear that Republicans will not vote for anything that the Democrats propose -- other than bills to augment war spending. More often than not, mainstream media outlets have examined the political "drama" surrounding healthcare reform instead of providing facts that would allow voters to assess the merits of the various proposals.

In the middle of this theatrical performance, the Obama Administration went into hibernation. During the month of August, the president -- who campaigned with an almost unprecedented level of high energy -- virtually disappeared from the radar screen while the media and conservatives distorted Democratic healthcare reform proposals. Obama, however, returned from his vacation to Martha's Vineyard and delivered a speech, during which he lauded and embraced a public plan option. Since that speech, however, Obama has not forcefully advocated the creation of a public plan.

Perhaps liberals missed the warning signs, which indicated that the moderate and conservative positions on healthcare would certainly prevail. In July 2008, for example, Maxine Waters told MSNBC that the White House was not going to punish moderate and conservative Democrats who did not suppport a robust public plan option. Waters said that Rahm Emanuel gave Blue Dog Democrats political cover because he recruited many of them to run for Congress:

[Pushing Blue Dogs] may be difficult for Rahm Emanuel, because don’t forget -- he recruited most of them. As when he was over in the Congress, in the leadership, Rahm Emanuel recruited more conservative members and based on some of the information I’m getting, they told them that they could vote the way they wanted to vote, that they would not interfere with what was considered their philosophy about some of these things. So, now the chickens have come home to roost.

Perhaps the chickens are indeed roosting -- at least according to several stories that appeared yesterday on many leading political blogs, including TPM, Huffington Post and Politico. According to these reports, Emanuel personally visited Senate Majority Leader Harry Reid and demanded that he give Senator Joe Lieberman exactly what he wants regarding healthcare reform. Lieberman opposes a public plan and a buy-in option for Medicare. Lieberman has repeatedly vowed to filibuster any proposed healthcare reform legislation that contains either of these proposals. The recent reports which claim that Emanuel has told Reid to cater to Lieberman -- a claim the White House denies -- confirms the July statements of Maxine Waters.

Some careful readers will also remember that the White House intervened and allowed Lieberman to maintain his leadership positions on Senate committees, despite the fact that he ran as an Independent in 2006 and endorsed John McCain for president in 2008 during a speech he delivered at the Republican National Convention. Lieberman has threatened to kill the most important legislation that Congress has proposed in decades, and the White House continues to protect him politically and to cater to his interests.

To liberals who still believe that criticizing the Obama Administration is treasonous, I ask the following question: What must the White House do to receive legitimate criticism from the Left?

Update: An organization called the Progressive Change Campaign Committee has launched an advertisement that criticizes Rahm Emanuel's willingness to discard the public plan option. The ad is posted below: