Authorities in the UK banned a misleading ad, but they still don't think heavy retouching is socially irresponsible 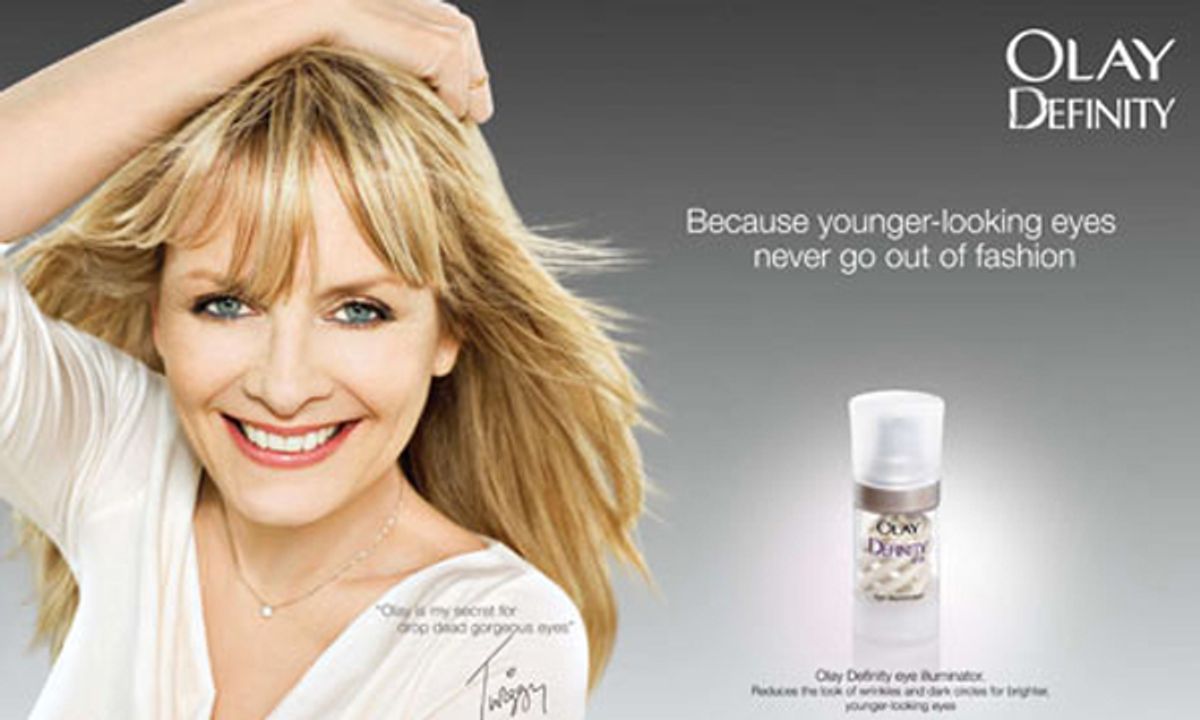 When people talk about unrealistic beauty standards and the media's effect on women's body image, it's usually not long before Twiggy's name comes up, even 43 years after the ultrathin model first made a splash -- and for that matter, more than 15 years since Kate Moss famously reinvigorated the "waif look" and wrought "heroin chic" upon the world. Even if today's girls have only heard about Twiggy from their grandmas, their self-esteem is still thought to be warped by the legacy of her 91-lb., 16-year-old body. And now, the 60-year-old model is being blamed for making their grandmas feel just as bad.

More precisely, Procter and Gamble is being blamed for Photoshopping the hell out of her face in an advertisement for an Olay eye cream, erasing crows' feet and under-eye bags with the flick of a mouse rather than diligent long-term application of the cream in question. The U.K.'s Advertising Standards Authority has banned the ad, on grounds that "the post-production re-touching of this ad, specifically in the eye area, could give consumers a misleading impression of the effect the product could achieve."But interestingly, the ASA rejected the idea that such images might harm women, beyond fleecing them out of a few bucks.

"We considered that consumers were likely to expect a degree of glamour in images for beauty products and would therefore expect Twiggy to have been professionally styled and made-up for the photo shoot, and to have been photographed professionally," it said. "We concluded that, in the context of an ad that featured a mature model likely to appeal to women of an older age group, the image was unlikely to have a negative impact on perceptions of body image among the target audience and was not socially irresponsible." (Not surprisingly, that's pretty much what Procter and Gamble is saying as well.) But actually, says Liberal Democrat MP Jo Swinson, who's launched a campaign against out-of-control retouching, "Experts have already proved that airbrushing contributes to a host of problems in women and young girls such as depression and eating disorders."

In November, leading authorities on body image sent a paper to U.K. advertising authorities (available as a Word document here) outlining the relevant research. Over 100 published studies have documented "a detrimental effect of idealised media images" on girls and women -- and increasingly, boys and men. Body dissatisfaction is linked to damaging behaviors such as "unhealthy dieting regimes and problematic eating behaviours (starving, bingeing, and purging), clinical eating disorders (anorexia, bulimia), cosmetic surgery, extreme exercising, and unhealthy muscle-enhancing behaviours in boys and men (such as taking steroids or other supplements). It is also linked to depression, anxiety, sexual dissatisfaction, and low self-esteem." And as for claims that a "mature audience" should be savvy about what goes into creating a print ad, the paper says, "Although most people know in some abstract, general sense that media models are 'artificial' as a creation of make-up artists, hair stylists, and flattering clothing and camera angles, people are typically not aware of the extent to which models are altered, particularly by digital retouching and imaging techniques that reduce or enhance the size of virtually any body part, making eyes larger, waists slimmer, and legs longer and thinner."

Even when you are aware, in theory, of how much is possible via Photoshop, it can still come as a shock to see the difference between that ad and a current picture of Twiggy, or a Vanity Fair portrait of 60-year-old Meryl Streep and a shot of her with only the benefit of professional hair, make-up and photography. Of the latter, Susannah Breslin at the Frisky writes, "I understand Photoshopping. I really do. But I just don't get the point here. Increasingly, it seems like women who really don't need to be Photoshopped to death are getting altered into unrecognizable oblivion." And over time, those of us who consume these images get so used to seeing a particular look, we can lose sight of the fact that it's not only unrealistic for the average woman to aspire to, but literally impossible. Twiggy and Meryl Streep have teams of professionals to make them look their best in person and erase any "imperfections" in post-production, but the rest of us can only shell out for miracle eye cream, cross our fingers, and hate our aging bodies. I applaud the ASA for acknowledging that the Olay ad promised more than it could possibly deliver -- but to say the ad isn't socially irresponsible is to ignore a growing mountain of evidence that images "altered into unrecognizable oblivion" have far-reaching and sometimes devastating effects on real people.