Why "The Simpsons" no longer matters

An expert discusses the cartoon's cultural demise -- and far-reaching impact 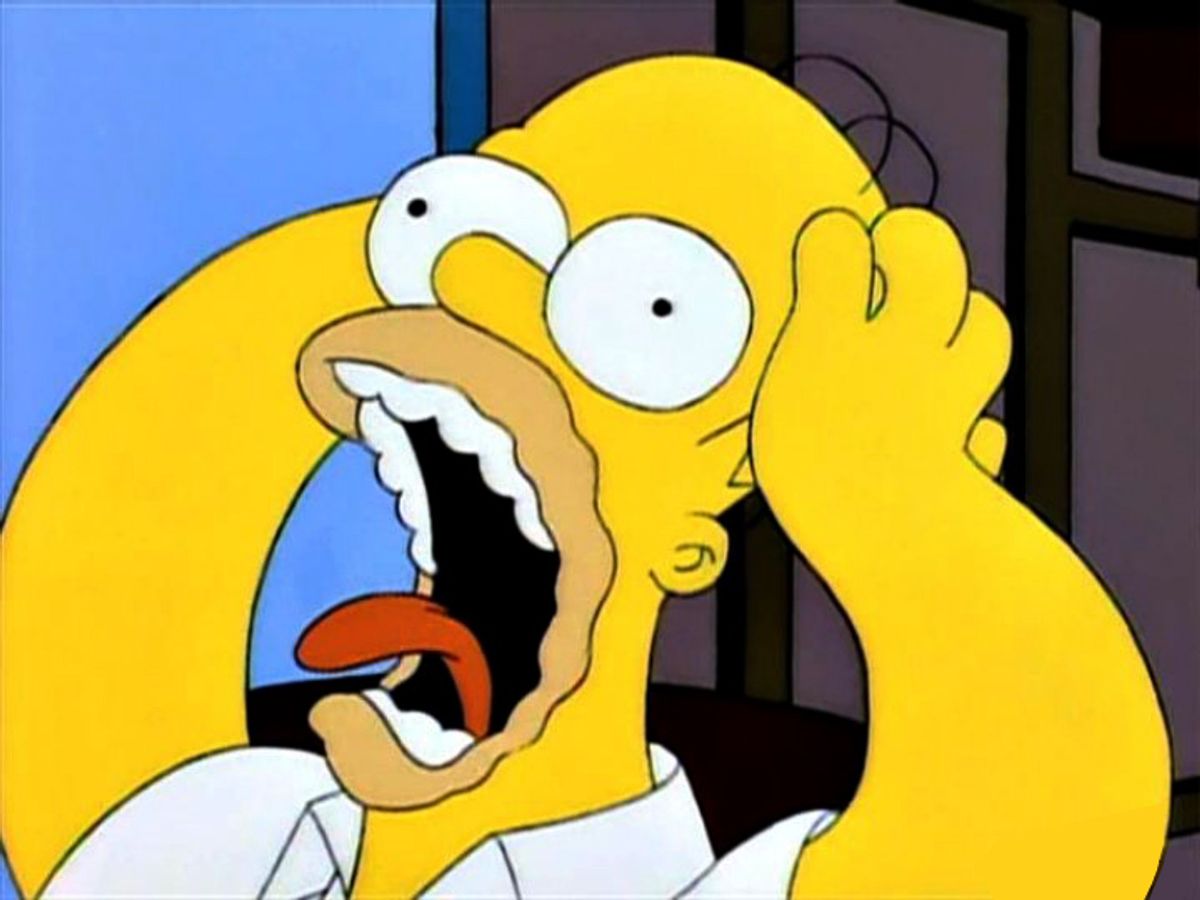 Homer Simpson of "The Simpsons"
--

What a difference 20 years makes! On Dec. 17, 1989, the still-infant Fox Broadcasting Co. aired the first episode of "The Simpsons," the animated show about a dysfunctional family from Springfield that has since become the longest-running prime-time series in American history. It's hard to overstate the show's impact. It has spawned a merchandising empire ("Simpsons" air freshener, anyone?), been at the center of a culture war (Barbara Bush called it “the dumbest thing I’d ever seen”) and inspired a hit movie (not to mention comedy writers' rooms everywhere). Plus, "d'oh!" is now in the dictionary.

Thursday marks the show’s two-decade anniversary – an event that serves as a reminder not only of the show’s extraordinary staying power, but also the extent to which it’s disappeared from the cultural conversation. While "The Family Guy" and "South Park" have kicked up controversy – tackling subjects like Scientology and abortion – "The Simpsons" seems to have aged from envelope-pushing misfit to grandfatherly institution. But as John Ortved argues in "The Simpsons: An Uncensored, Unauthorized History," an oral history of the show's tumultuous rise and creative demise, the "Simpsons’" legacy continues to be felt everywhere from "Wall-E" to Barack Obama’s speechwriting.

Salon spoke to Ortved over the phone about the show’s effect on television comedy, Marge’s recent Playboy cover, and whether it's finally time to pull the plug.

I guess the obvious first question is: Why has the show lasted so long?

I think "The Simpsons" has lasted so long because its initial seasons – the first five – laid strong and solid groundwork. It was an amazing combination of creative forces and timing. Fox was a brand-new network. There was relatively nothing else on TV. Then you had the creative force of Matt Groening's original drawing style, the brilliant humor of Sam Simon and the writing room he put together, and James L. Brooks’ ability to create fine dramedy.

I think that the show's drop in quality has been both a gradual one and a relative one. I think to be fair to the writers and to be fair to Matt Groening, there's only so much you can do with a set of characters in a situation. I mean, no one has written a show for 20 years. It's amazing that they're still funny at all. As the show sort of moved away from its roots, starting around the sixth season, and the show kind of got a little zanier, the show became sort of unmoored from those emotional character-driven plots that initiated the series. You really start to get 21 minutes of throwaway jokes and then one minute of emotional reconciliation thrown in at the end.

After it hit that 10-year mark, the show had a serious drop-off in quality, and it's just never, ever come back. They started relying on guest stars and more topical humor, which they can't really do because the lead time is so long. So I think this actually speaks to how outdated their writing room is. They'll do an "American Idol" episode, but they'll do it four years after "American Idol" became this big thing. Or they'll do an iPod episode, but they do an iPod episode in like 2006.

When I recently spoke with Mike Judge, he said the reason why "King of the Hill" had lasted so long was because they withstood the pressure to change the characters as they went. Otherwise, you keep making small deviations, and as you put people in increasingly outrageous situations, you lose what the show is even about.

I think that's absolutely apt, and I think that is one of the things that happened with "The Simpsons." Once that unmooring took place, there was no going back. When they tried to, they couldn't, because they didn't have the same chemistry in the room, and once you throw a bag of feathers off a roof, you can never collect them.

I used to watch the show all the time when I was a teenager, but now, as a man in his 20s in New York, I don't think I know a single person who watches. Who do you think is still tuning in?

That's a really good question. I still watch it. Not religiously, even though I don't think it's funny anymore. I think we're creatures of comfort – people like you and me who grew up watching it every day when we came home from school. We really speak "Simpsons." I think it's actually interesting and important to note that President Obama's chief speech writer is a 28-year-old guy. I mean there's no way that "The Simpsons" hasn't influenced the way that guy tells stories.

I think that audiences' sense of irony, and audiences' willingness to accept a certain level of irreverence, have been really influenced by "The Simpsons." For example, I love that when the New York Post covered the Iraq Study Group’s report, the title was "Surrender Monkeys!" which is a "Simpsons" line.

That’s funny. I use that term all the time too, actually, and I totally forgot where I knew it from.

I would add that "The Simpsons" made audiences a lot smarter. They really raised the bar for what you could put out there and what audiences were ready for. I can't say with any authority that we wouldn't have "The Daily Show With Jon Stewart" without "The Simpsons." But I doubt it.

Given how extreme television has become, it seems so strange to me that the show was actually considered offensive when it first appeared.

It’s completely ridiculous if you look at TV now. Almost nothing is controversial now. I think part of the Simpsons’ early controversy was a bad publicity thing drummed up by the Bush White House when he was campaigning for his second term. With the Bushes going out and the Clintons coming in, there was this move from the right to make culture the focus. I don’t think there’s this switch overnight of "Full House" and Bush, then "The Simpsons" and Clinton, but I think that the controversy was part of a program to get people up in arms about family values.

What do you make of Marge’s recent Playboy cover? To me it seemed like a bizarre collaboration between two outdated brands.

I think it actually speaks to the Simpsons’ continued influence and their power that you could put a cartoon character on a magazine cover like Playboy and still sell it. The relevance of what "The Simpsons" had to say ended a long time ago, but it’s still relevant as a brand. They’ve opened a "Simpsons" ride in Universal Studios, and I would look for more of that stuff in the future, like a Simpsons Land.

Would you choose to pull the plug on the show if you could?

I think "The Simpsons" has always been a product of News Corp., and the decision to pull the plug will be when the show becomes unprofitable. They could do things to revamp it. There’s really two rooms working on the show: One room is [executive producer] Al Jean and his yes men, and the other room has the younger, hipper comedians. [The second room] sends jokes to the first room, and all their good stuff gets written out of it. I think if they were to save the show, they would need to get rid of the show runner and really shake up the writing room. I don't know if they'll ever get it back to the level they had, but they could start making great episodes again.

Who do you think is the direct heir to "The Simpsons"?

Without sounding too cheesy, I think contemporary television is itself the heir. I think "The Simpsons" in one way or another gave us most of what's smart and progressive in television. But I consider the most direct heir to be Zach Galifianakis’ "Between Two Ferns." For something that awkward and meta-theatrical to be accepted by a wide audience, we have to thank "The Simpsons."

To me, the most direct descendants are the Pixar films – with their mix of child-friendly comedy and adult satire.

I think that’s astute not just because Brad Bird left "The Simpsons" to make "Iron Giant," then Pixar movies. When I talk about redefining our humor, the way that "The Simpsons" constructs stories, in which they go from having an A and a B story in a classic sitcom to having four to five storylines, you can see that in the Pixar movies.

Given the proliferation of cable channels and the Internet, do you think there will ever be another TV show that has as big an impact on our culture as "The Simpsons"?

There will never be another show or entertainment program as wide-reaching as "The Simpsons." It’s largely a question of timing. Fox was the fourth network. They hit all these timing buttons right on the head. It was the last time that a network TV show could be that omnipresent – because of the choices, because of the cable networks, because of satellite, because of Zach Galifianakis.

But, if there’s ever a Zach Galifianakis ride at Universal Studios, I’ll definitely be paying money for it.