Female "person of the year"

Since Time hasn't given a woman that honor since 1986, we asked some feminist writers for their picks 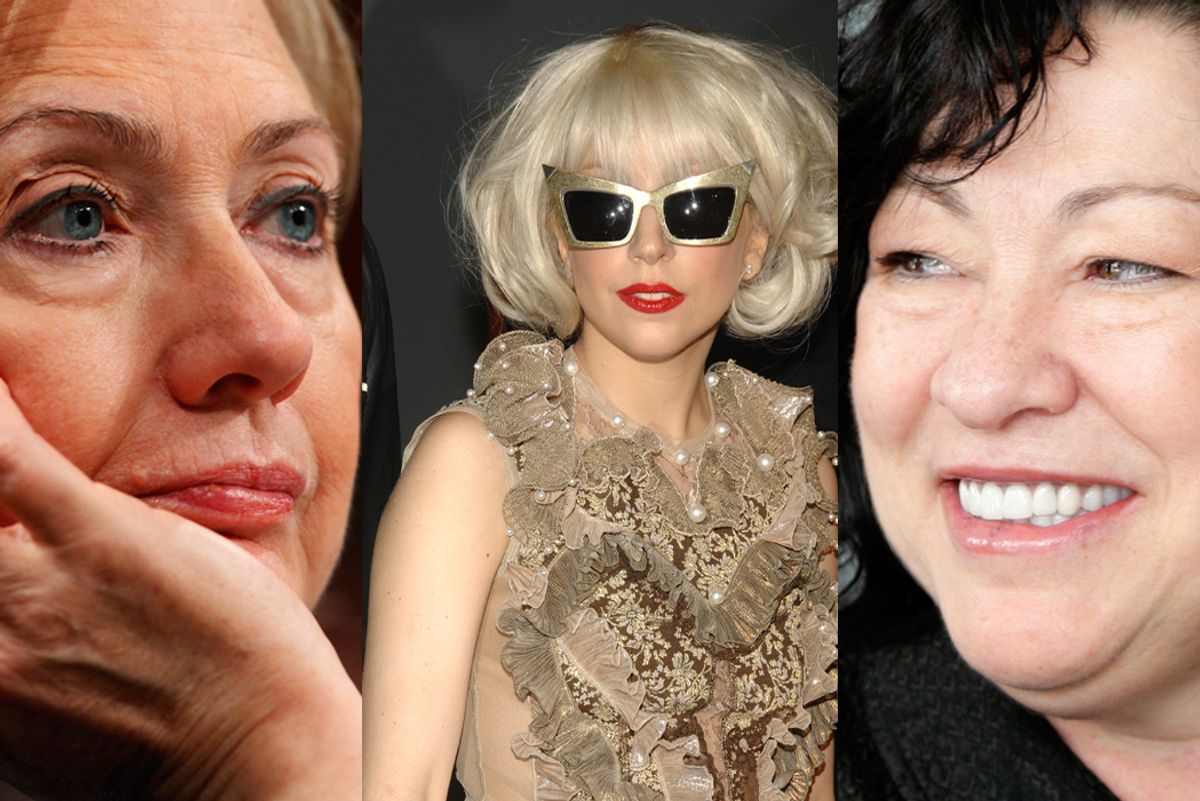 In 1999, Time magazine changed its "Man of the Year" title to "Person of the Year," but the linguistic switch had no apparent effect on the magazine's long and rarely interrupted stretch of honoring male persons at year's end. In fact, there hasn't been a stand-alone female honoree since Corazon Aquino was "Man of the Year" in 1986. "The Whistleblowers" of 2002 featured three women; 2003's winner was "The American soldier"; and Melinda Gates was one of 2005's "Good Samaritans," along with her husband and Bono. Oh, and I suppose female persons share in the 2006 "We couldn't really think of anybody this year" award. (They literally covered every woman who saw the cover with that one! What am I complaining about?) But Jeff Bezos, George W. Bush, Rudy Giuliani, Vladimir Putin, Barack Obama and, as of yesterday, Ben Bernanke have all earned solo "Person of the Year" covers since the language was changed -- as have Mikhail Gorbachev and Bill Clinton (twice each), George H.W. Bush, Ted Turner, Pope John Paul II, Newt Gingrich, David Ho, Andy Grove and Kenneth freakin' Starr, since Aquino's win. I am detecting a pattern.

As Rachael Larimore said at Double X, it's not like there's "a burning need for affirmative action in the meaningless-year-ending-attention-grabbing awards department. I don't care who Time picks. (And, believe me, I'm not sad it wasn't Nancy Pelosi this year.) But if Time is so uncomfortable with itself because its 'Carbon-Based Life Form of the Year' award comes across as sexist, it should, you know, give the honor to a woman once in a while." Time did award Pelosi runner-up status for 2009, but like Larimore, we knew there were even better candidates going ignored. "If ladybloggers were in charge," we asked ourselves, "who would be the Female Person of the Year?" And then we set about answering that question.

Four women tied for the most nominations (three each) in a highly scientific poll of noted women writers who responded promptly to my e-mail. "I know it's an obvious answer, but I must vote for Hillary Clinton," said Double X's Jessica Grose. "She's just done a fantastic job as Secretary of State. She hasn't showboated, she's just put her head down and worked -- without compromising any of her core beliefs. No wonder her approval rating is soaring. Also, I think Americans don't put enough stock in being able to handle defeat gracefully. It's all about the winners. Clinton lost the election and yet has become the consummate team player." Shakesville's Melissa McEwan added, "she gave us a hell of a gander at what a feminist looks like during her first year in President Obama's cabinet, whether it was delivering some major pwnage on reproductive rights or speaking out against sexual and gender-based violence while doing a little globetrotting awareness-raising. She also showed what it looks like to keep a campaign promise, by making good on her vow to make global gay rights an active 'part of American foreign policy,' in response to proposed legislation in Uganda to make homosexuality a crime punishable by death." "The Curse of the Good Girl" author Rachel Simmons also called Clinton the "duh" answer, but Bitch Ph.D's M. LeBlanc countered, "Duh! It's fucking Sonia Sotomayor. Obviously" -- a sentiment reinforced by Veronica I. Arreola, director of Women in Science and Engineering at University of Illinois at Chicago (and Viva la Feminista owner) and Pamela Merritt, the Angry Black Bitch.

Jessica Valenti of Feministing went with yet a third "duh": "Um, Maddow. That is all," and her colleague Ann Friedman elaborated, "Over the past year, Rachel Maddow has proved that there is still an audience for substantive television. She balances a serious news-anchor persona with a friendly and down-to-earth off-camera image. Plus, she manages to be openly and proudly gay, but not defined by her sexuality. It's a feat far too few people have managed to pull off. She is truly a journalist for the Obama era." Friedman was also among the three who named Neda Agha-Soltan -- "the young Iranian woman who died on YouTube a million times over," in Simmons' words -- as a contender for woman of the year. In fact, she expanded that nomination to encompass all "Iranian Women Activists. Yes, that includes Neda Agha-Soltan -- but is certainly not limited to her. When Iranians rose up to demand democracy and rights in June, women led the charge. And they paid the price -- the government is cracking down on women's rights organizers now more than ever. I know this isn't a stand-alone woman nomination, but -- despite the attention Neda garnered -- this just goes to show that sometimes women can't stand alone. We are more effective when we fight together."

Two women who changed the American pop culture landscape in 2009 garnered two nominations apiece. Women and Hollywood's Melissa Silverstein and Tiger Beatdown's Sady Doyle both picked "The Hurt Locker" director Kathryn Bigelow, for, in Doyle's words, "making a really great movie, blasting down stereotypes about which movies women can and cannot direct, and presenting us with a future in which a woman, FINALLY, might win a Best Director Oscar. For an action movie!" Doyle also suggested Lady Gaga, "for winning over all haters, claiming her feminism, being perhaps the only non-runway model in the history of the world to successfully wear those terrifying lobster-looking McQueen heels, and turning pop music into a venue for a funny, fun, powerful, daring expression of female sexuality that doesn't just recycle the same handful of boring old sexy-virgin tropes."  Friedman adds, "Rah rah ah ah ah roma romama gaga ooh lala. Duh." (To recap: We are now at four wildly different nominees who have  earned a "Duh.") Silverstein gave an additional nod to Meryl Streep, "for making 60 look fantastic on the screen," and Salon's Sarah Hepola offered a love letter to "Twilight's" Kristen Stewart: "She may be famous for playing an irritating heroine -- hey, even she makes fun of "Twilight"! -- but at 19 years old, she's on the cover of every tabloid, starring in the biggest movie so far this year, and has rammed a stake into a boring rut of bubbly, gleamy-toothed teen queens like the (I'm sure she's lovely) Vanessa Hudgens and the (does a lot for charity) Hayden Panettierre. Kristen Stewart is smart, talented, dark, slightly pained by gobs of attention and hugely successful. She's playing Joan Jett, OK? I don't give a damn about her bad reputation."

Friedman wasn't the only one to violate the "stand-alone" rule. Arreola's second choice was "The Nobel Prize winning women, especially the women who won the Nobel in Medicine. When I heard that Elizabeth H. Blackburn and Carol W. Greider had been awarded the Nobel Prize and that Greider had been Blackburn's graduate assistant, I immediately sent it out to my students. The win is not just a win for women but also a win for mentoring." And after acknowledging that Sonia Sotomayor was the first name to spring to mind, Merritt added, "But there is a huge part of me that thinks the woman of the year is the re-awakened feminist -- the women who pulled together in coalition to protest Stupak and defeat Nelson, the women who are now organized to demand reproductive justice in a way that has never happened before."

Simmons had two other picks, "The retroactive: Claudette Colvin, the woman who was the 'real Rosa Parks' but who has lived her life in anonymity even though she was the first to refuse to move to the back of the bus. An award-winning children's book was published about her this year" and "The slightly undeserved but so was Barack's Nobel: Michelle Obama." Lesley Kinzel of Fatshionista suggested breakout star Gabourey Sidibe, who's consistently charmed audiences in interviews just as much as she moved them in "Precious." M. LeBlanc and The Frisky's Jessica Wakeman agreed with Time that Nancy Pelosi deserved a nod; said LeBlanc, "The house has passed all manner of incredible legislation this year." Most of my selections have been mentioned at least once, but I'll throw two more into the mix: Laura Ling and Euna Lee, the journalists who, while reporting on trafficking of women along the North Korean border, accidentally crossed it themselves and spent nearly five months in prison there.

Who, then, is Broadsheet's official pick for Female Person of the Year? None of them. Which is to say, all of them -- and undoubtedly many more we and our prompt responders didn't immediately think of. (If more responses come in, I'll update the post throughout the day.) But we can agree on one thing: as Friedman put it, "these are my Person of the Year nominations," not just women of the year. Too bad Time didn't consult us.

Updates: Nona Willis Aronowitz, co-author of "Girldrive," checked in to say, "I second Rachel Maddow and Sonia Sotomayor, but I'd also like to give a nod to Sarah Palin, solely for providing a platform for feminist writers and activists everywhere to call out exactly what's wrong with the GOP's opportunistic, hypocritical co-opting of feminism. (I guess that's 2008, too, but her memoir just drove the nail in deeper.)" Dodai Stewart of Jezebel made a similarly contrarian choice: "Most of my picks -- HRC, Lady Gaga -- are in there, but instead of Kristen Stewart, I'd say Stephenie Meyer -- I don't think the "Twilight" books are very well written, but she had the ability to energize a huge fanbase and get girls and moms reading and going to the movies. We haven't seen that since, well, J.K. Rowling, ha!"

Finally, two other nominations came in via Twitter and Facebook: Canadian activist Muriel Duckworth, who passed away in August, and Elouise Cobell, lead plaintiff in a suit against the U.S. federal government for mismanagement of the Individual Indian Trust. After 13 years of litigation, the suit was finally settled this month, and according to Mother Jones, although Cobell says "Indians did not receive the full financial Settlement they deserved," what they did receive is "believed to be the largest ever against the federal government and dwarfs the combined value of all judgments and settlements of all Indian cases since the founding of this nation."