Dumbing down the first lady 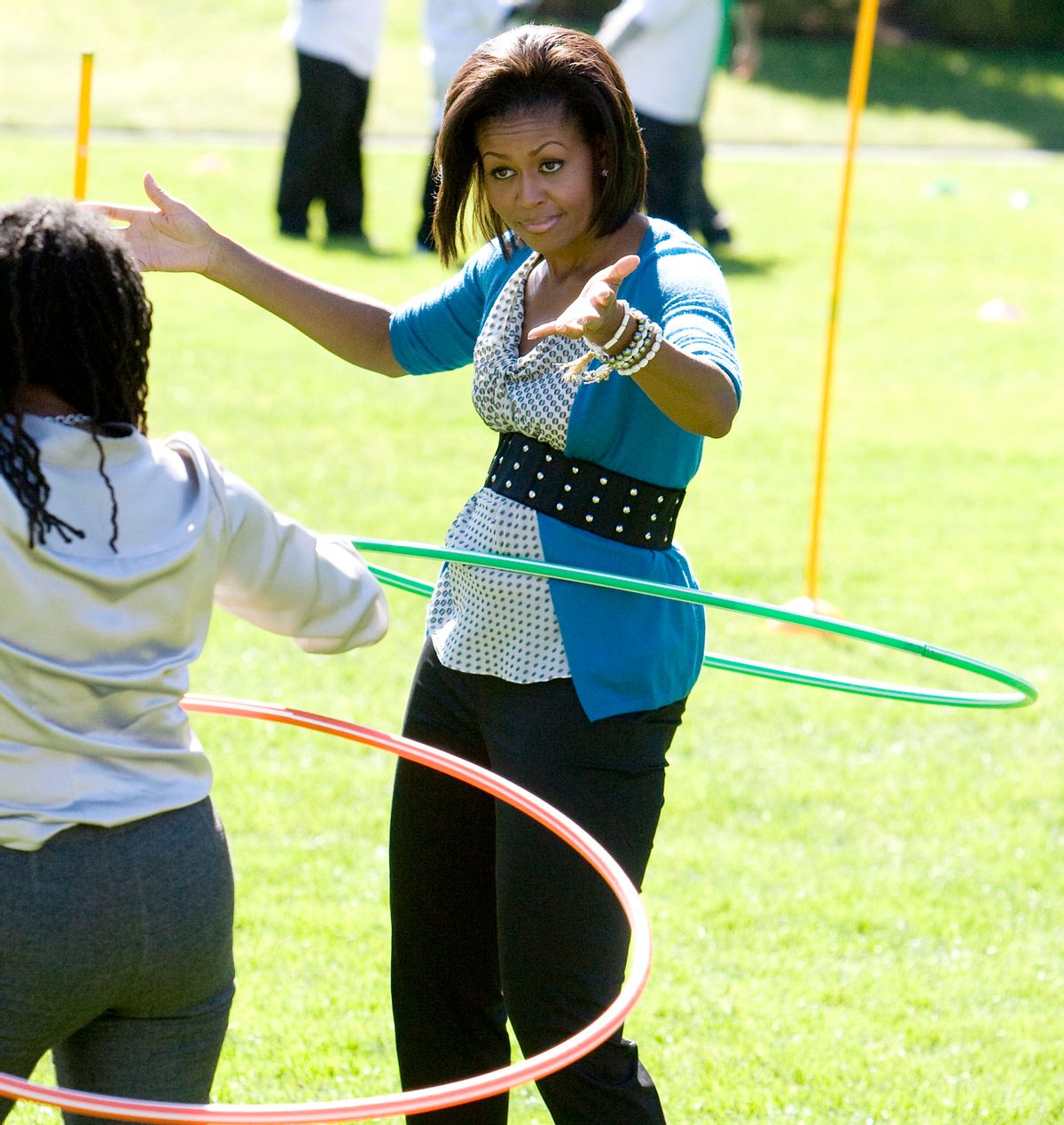 A year and a half after her approval rating hit a low of 44 percent, Michelle Obama is now enjoying the "overall favorable" opinion of many more Americans -- 68 percent, according to a recent Marist College Institute for Public Opinion poll. Even 67 percent of Republican women gave the first lady a thumbs-up in an April Pew poll. Lynn Sweet at Politics Daily says the reason for the change is clear: "She has done this by framing herself as a wife, mother, daughter and sister, not trying to redefine the role of first lady, limiting interviews and staying militantly noncontroversial. "

It's not like this analysis comes as a surprise, but seeing it all spelled out -- with the implication that it's a brilliant strategy future first ladies would do well to take note of -- was a kick in the gut nonetheless. Consider: "Mrs. Obama has become a fashion plate, a mom who attends the soccer and basketball games of daughters Malia and Sasha, a woman who works on her tennis game, and an executive who presides over a staff of around two dozen in the East Wing" -- but don't get excited about that last part, because the staff is there to "help her execute her limited, but safe agenda." Also: "The only new ground Mrs. Obama has broken has been her wildly successful White House kitchen garden." And then there's this approving quote from presidential historian Douglas Brinkley: "She hasn't gone the Hillary Clinton or Eleanor Roosevelt route of becoming a shrill policy advocate." Yes, he said "shrill." But thankfully, Michelle and her two Ivy League degrees and decades of professional experience are not! They are far too busy planting vegetables and delivering toys to needy children and working on their tennis game to go shrilly meddling in manly business.

Don't get me wrong, I'm happy that people love Michelle now; it's a lot better than the alternative. And I understand that the combination of racism, sexism and widespread hatred of all things vaguely liberal leave her little choice but to fly under the radar as much as possible, lest she become a disproportionate distraction. But the more I see this narrative recycled -- Michelle is so smart for recasting herself as non-threatening, maternal and basically empty-headed! -- the more I toggle between anger and despair. What's left out is that she was forced to work overtime establishing herself as a caricature of traditional femininity because when she acted like herself, too many people missed the obvious: that she never was threatening, that she always had an apparently wonderful relationship with her daughters -- cultivated while her husband was constantly traveling to build his political career -- and that her brains were a major asset to the whole family. Also left out: how she feels about being at the mercy of image consultants who apparently decided there was nothing wrong with her that a belted cardigan and a lobotomy wouldn't fix.

"Happy Mrs. Obama should be," writes Sweet, based entirely on those approval numbers. And maybe she is, even. But I can't read a story like this without thinking back to the New York Times magazine profile of the first marriage, in which Jodi Kantor asks both Obamas "how any couple can have a truly equal partnership when one member is president." The president hems and haws, then jokes that "My staff worries a lot more about what the first lady thinks than they worry about what I think." But Michelle doesn't settle for blowing off the question. "Clearly Barack's career decisions are leading us," she says. "They're not mine; that's obvious. I'm married to the president of the United States. I don't have another job, and it would be problematic in this role. So that -- you can't even measure that."

He's running the free world, she's costarring in public service announcements with Elmo. And time and again, as her image becomes more traditionally feminine and toothless, we're told not only that this is a turn of events worth celebrating, but that she should be applauded for recognizing the danger of stating an opinion more controversial than "Exercise is good for you." The primary evidence of her intelligence and political savvy is that she now knows better than to offer any evidence of her intelligence and political savvy -- and the more she behaves in a relentlessy ladylike and "militantly non-controversial" manner, the more she's lauded as an excellent role model for young girls. Fantastic.

If a pollster called me right now, I would count myself among those with an overall favorable impression of the first lady, but it's not because of how she's changed -- it's because I hope that secretly, she hasn't.  It's because I hope this Donna Reed veneer is artificial and temporary, that she's just riding out the presidency without making waves, so she can say, "Now it's my turn" when it's over. It's entirely possible that I'm wrong about that and projecting way too much onto a woman I will never know. But since that's all any of us are really doing, I like my version a lot better than the one that's made her so uncontroversially adored.