A voluptuous Fergie and a suave Daniel Day-Lewis give Rob Marshall's uneven, Fellini-esque musical some class 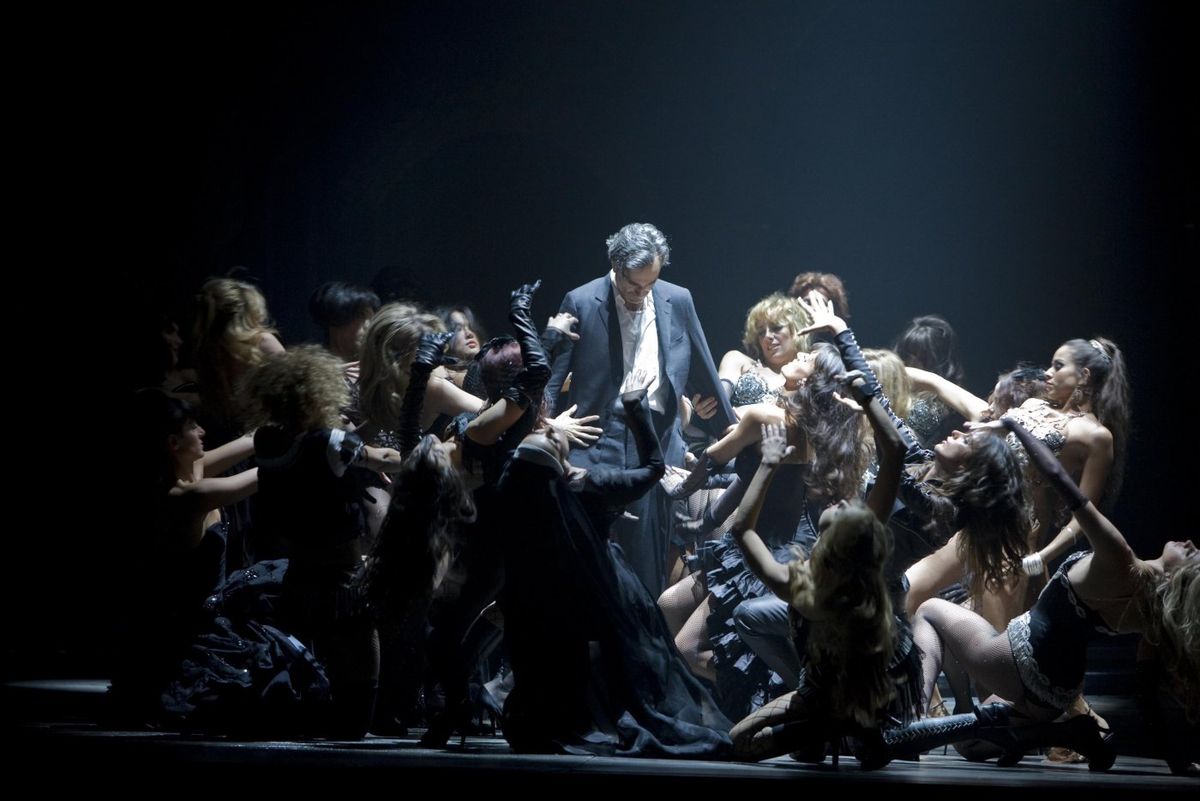 In "Nine," inspired by Fellini's "8 1/2," Daniel Day-Lewis faces the unenviable task of stepping into the shoes of Marcello Mastroianni -- and they have to be dancing shoes, no less. Day-Lewis isn't Mastroianni -- who is? -- but watching him is one of the pleasures scattered here and there through Rob Marshall's ambitious but cluttered film version of Arthur M. Kopit and Maury Yeston's hit Broadway musical.

Day-Lewis isn't even trying, of course, to play Mastroianni in any strict sense. "Nine" is a loose musical reimagining of Fellini's 1963 picture about an auteur, Mastroianni's Guido, in search of his elusive next movie. That Guido -- like this one, played by Day-Lewis -- is haunted by the women of his past and confounded by the women in his present; he needs to find inspiration in them, not just chaos.

In "Nine," those women are played by an assortment of performers, from A-listers (past and present) to veteran actresses to pop stars. Sophia Loren, as Guido's hovering, judgmental but affectionate mother; Nicole Kidman as Claudia, the actress who's gearing up to star in his next picture; and Penélope Cruz as Carla, his flashy, passionate mistress. Stacy Ferguson, the singer better known as Fergie (of the Black Eyed Peas), appears as Saraghina, the salacious, witchy temptress of Guido's childhood memories. The other colors in Guido's revolving palette of feminine inspiration are Lilli (Judi Dench), his longtime costumer; Stephanie (Kate Hudson), a bubbly American journalist who adores all things Italiano; and Luisa (Marion Cotillard), Guido's cherished yet underappreciated wife. All of these women, and Day-Lewis too, sing and dance vigorously and enthusiastically throughout "Nine," and the results are spotty, though you can't accuse anyone of not trying.

Unfortunately, they're often further sabotaged by the filmmaking. Marshall made his directorial debut with the dazzling 2002 "Chicago," and even if that picture relied too much on fast cutting for its energy, it still offered, without apology, many of the long-lost pleasures of the movie-musical spectacle. Marshall's next picture, "Memoirs of a Geisha" (2005), was prestige filmmaking at its worst, the movie equivalent of a well-rouged and powdered corpse.

"Nine" is much messier than "Chicago" and far more entertaining than "Memoirs of a Geisha." Its imperfections aren't enough to completely sink it, although frustratingly, they too often drag it down. The screenplay, adapted from Kopit's book by Michael Tolkin and the late Anthony Minghella, is serviceable enough, and Dion Beebe's cinematography is sufficiently glittery. But Marshall slices and dices the dance numbers so that we rarely get to take in the whole of a dancer's body. He may be trying to mask some subpar dancing, but as your grade-school music teacher told you, You just gotta belt it out! The same goes for presenting dance on film, especially when you're featuring performers who aren't trained dancers.

Some of Marshall's problems may originate with the material. So many of the lyrics here ("I feel my body chill/ Gives me a special thrill/ Each time I see that Guido neo-realism") are just plain dumb, and not even the sight of Kate Hudson shaking and shimmying in a tinsel minidress can rescue them. But at least Hudson tries. Kidman -- so appealing in "Moulin Rouge," despite her hardly being a perfect fit for musicals -- just looks parched, stretched and uncomfortable. There's no sensuousness about her; the best she can muster is a kind of shellacked glamour.

Cotillard and Fergie give the finest performances here. Cotillard, done up as an Audrey Hepburn-style minx in bangs, makes demureness sexy, and although her musical number may not be the smoothest of the lot, she still brings the right amount of fire to it. Fergie, on the other hand, practically stops the movie. She's fortunate enough to have the show's finest and catchiest number, "Be Italian," and after I watched her slink her way through it, I wished -- even though I'm an adamant nonsmoker -- there was a bed around so I could flop back on it and have a cigarette. Fergie, who gained some weight for this role, is a voluptuous, purely sexual presence, and a deliciously lethal-looking one: She looks as if she could crush boulders between those thighs. Imagine what she could do to Day-Lewis!

Luckily, Day-Lewis emerges from the movie unscathed. He's neither a perfect dancer nor a fluid singer. But he knows how to move, and it's enjoyable to watch this generally very serious actor cutting loose and having some fun. My favorite visual from "Nine" is the sight of Day-Lewis folding his lanky frame, like a penknife, into a powder-blue sports car so small it looks like a toy. He zips around Rome in this miniature vehicle, a man on a mission. His assignment: to look fabulous. And, channeling the spirit of the late, great Mastroianni, he does. Ciao bello.