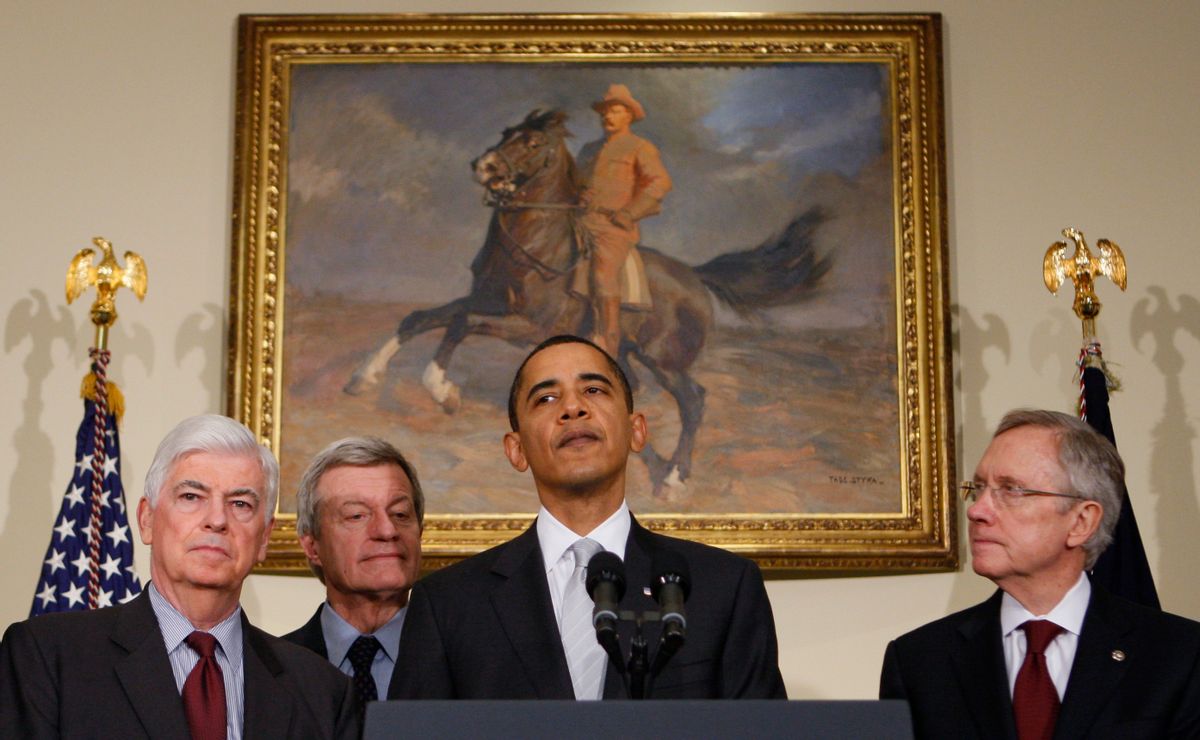 Every now and then, an insider inadvertently exposes the hideous rationalizations that run the American political grotesquerie. The best known of these statements are memorialized on TV as "gaffes." But the ones that never become famous tend to reveal the ugliest assumptions of all.

"It's about being a candidate as opposed to being president," said the drug industry's top lobbyist in defense of Obama's flip-flop.

This explanation is common among politicos -- we last heard it when the New York Times' John Harwood quoted an administration aide attacking those demanding Obama fulfill his campaign pledges. Disenchanted activists, said the White House, "need to take off [their] pajamas, get dressed and realize that governing a closely divided country is complicated."

These "candidate vs. president" idioms are standard among Beltway elites who belong to what New York University's Jay Rosen calls "the Church of the Savvy." Their catechism says that anyone demanding a president deliver on campaign promises is naive because, allegedly, there is an inherent difference between what a candidate can tell voters and what that candidate can support as president. Those rejecting this "savvy" interpretation are therefore lambasted as petulant children who refuse to "take off their pajamas" and "get dressed."

It's a canard, of course -- one sculpted to excuse selling out. And there are two huge problems with it.

First, ignoring presidents' broken promises defiles our republican democracy. In America, we only get to choose presidents every four years, meaning we must rely on campaign promises as metrics for electoral choices. But if the entire idea of the campaign promise becomes an assumed joke, then we have no metrics by which to elect leaders.

Second, an obvious but taboo truth: There are almost no substantive reasons candidates cannot champion their election-year promises once in office. These pledges are made through deliberative processes. Candidates shouldn't make them if they're not serious about follow-through -- and it's not unreasonable to ask officeholders to at least try to honor the campaign commitments that informed voters' electoral decisions. That's especially true on something like drug importation, whose opposition is about enlarging profits, not, as Obama aides argue, about protecting consumer safety.

Drug companies already manufacture medicines in the developing world so as to evade U.S. labor, environmental and safety regulations. They then legally import those products for sale to Americans at inflated prices. The new bill would have merely let wholesalers, not just manufacturers, import medicines -- but at the lower prices the manufacturers concurrently sell those medicines abroad. Such wholesale importation is permitted throughout Europe and the rest of the industrialized world. So two questions: If the administration actually believes importation is unsafe, why isn't it banning current drug imports? And if the administration specifically insists wholesale importation is unsafe, then where are all the dead Europeans?

Certainly, some "candidate vs. president" differences might justify rare instances of dishonesty. A president might momentarily dissemble to, say, protect soldiers on the battlefield.

But fibbing for the public good is different than breaking promises for private gain. In the latter cases, "candidate vs. president" apologias are non sequiturs. They justify nothing -- and they clearly do not rationalize an importation U-turn by Obama designed only to protect a drug cartel.

That kind of power-coddling reversal insults voters, and absolving such an insult isn't savvy -- it betrays our nation's founding principles.