Happy holidays from the banks 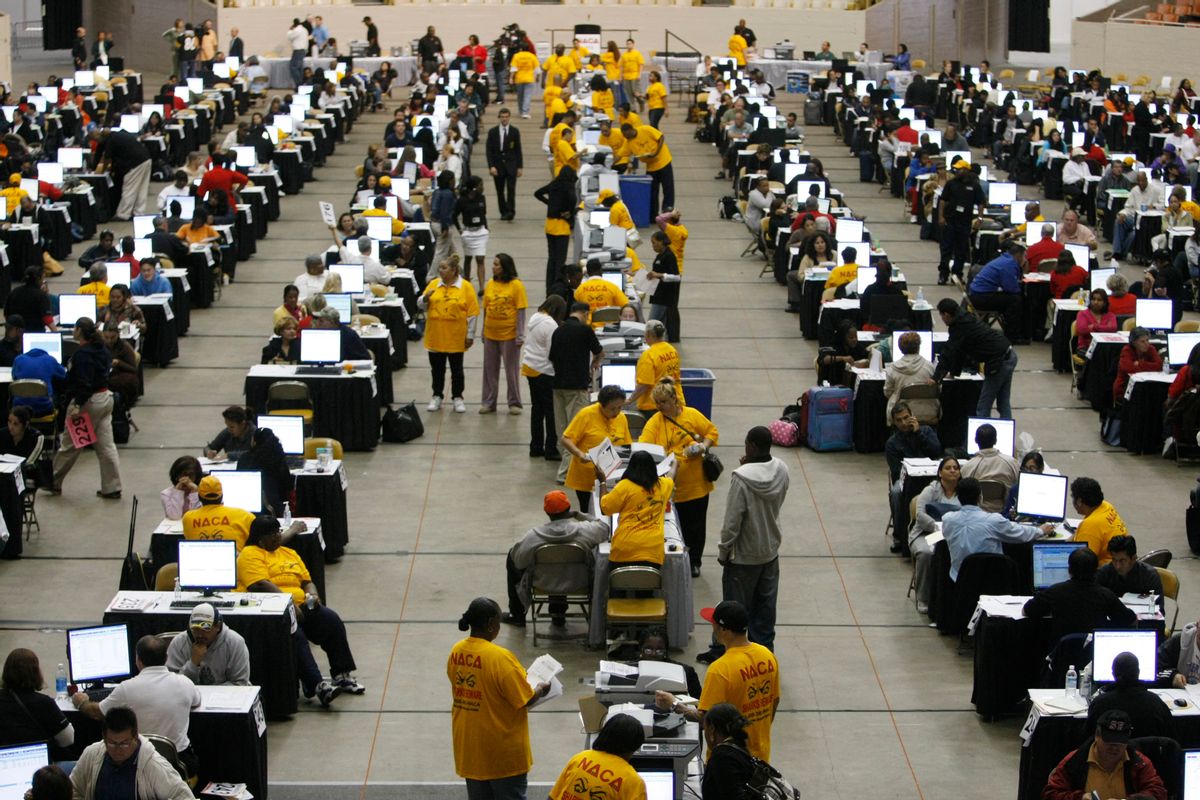 Never mind President Obama's audacity of hope. It's the audacity of the banks that takes your breath away. Mean old Mr. Potter in "It's a Wonderful Life" seems like Father Christmas by comparison.

A recent report that Citigroup and Goldman Sachs may have received preferential treatment getting doses of the swine flu vaccine was enough to give Ebenezer Scrooge the yips. Then came news that in order for us to get back the taxpayer bailout money we loaned it, Citigroup is receiving billions of dollars in tax breaks from the IRS.

And there's a new study this week, "Rewarding Failure," from the public interest group Public Citizen, revealing that in the years leading up to the financial meltdown, the CEOs of the 10 Wall Street giants that either collapsed or got huge amounts of TARP money were paid an average of $28.9 million dollars a year.

In 2007, that amounted to 575 times the median income of an American family. Now, thanks in part to the banks' monumental malfeasance that led to our economic swan dive, food stamps are now being used to feed one in eight Americans and a quarter of all the kids in this country. A new poll from the New York Times and CBS News reports that more than half of our unemployed have borrowed money from friends and relatives and have cut back on medical treatments. The Times wrote, "Joblessness has wreaked financial and emotional havoc on the lives of many of those out of work ... causing major life changes, mental health issues and trouble maintaining even basic necessities."

Yet according to the nonprofit Americans for Financial Reform, the reported $150 billion that Wall Street is paying itself in compensation and bonuses this year would be enough to solve the budget crisis of every one of the 50 states or create millions of jobs or prevent all foreclosures for four years.

All of this wretched excess is occurring as more and more people can't afford a roof over their heads. Foreclosures were up another 5 percent in the third quarter -- 23 percent more than a year ago. Fewer Americans are willing to buy foreclosed properties, and the Obama administration's foreclosure prevention plan has been a bust so far -- way too timid, critics say, and many of the banks won't play ball, refusing to negotiate in good faith with homeowners desperate to hold on.

We got a firsthand look at the crisis this week when thousands lined up at the Jacob Javits Convention Center just a few blocks from our Manhattan offices to attend a mortgage assistance event sponsored by the nonprofit Neighborhood Assistance Corporation of America (NACA). So many showed up for this leg of the "Save the Dream Tour" that on many days, staff and volunteers stayed to help until 1 in the morning.

NACA has had success getting homeowners and banks together to work out a deal to prevent foreclosure. But the big banks' return to the government of the TARP bailout money with which we underwrote them over the last 14 months is a mixed blessing -- great to have the cash returned so quickly, terrible because any leverage Washington held over the banks because of the loans virtually vanishes with the payback. They're back in the saddle and not inclined to be of much assistance helping anyone else out, especially those in mortgage trouble.

Executive compensation, leverage limits and lending standards were all issues that Washington said it planned to change -- and when the taxpayers were the shareholders of these firms, it probably could have done so. But now the White House has been left in the position of extending invitations, rather than exercising its clout. And in the figurative and literal sense, it is getting stood up.

Afterward, Obama said, "The problem is there's a big gap between what I'm hearing here in the White House and the activities of lobbyists on behalf of these institutions or associations of which they're a member up on Capitol Hill."

That's putting it mildly. This week, the American Bankers Association sent out an update and "call to action" memorandum crowing over its success in watering down the bank reform bill that was approved by the House and urging its members to beat back similar legislation in the Senate. Self-righteously, it concludes, "As one of your New Year's resolutions, please vow to do everything in your power to show, and to have your colleagues in your bank show, your Senators the right path to true reform."

It helps when the right path is paved with silver and gold. As "Crossing Wall Street," a November report from the Center for Responsive Politics, notes:

The finance, insurance and real estate sector has given $2.3 billion to candidates, leadership PACs and party committees since 1989, which eclipses every other sector ...

The financial sector has also been a voracious lobbying force, spending an unprecedented $3.8 billion since 1998, while sending an army of lobbyists to Capitol Hill to make its case. That's more money than any other sector has spent on influence peddling. Not even the healthcare sector, which spun up a lobbying frenzy this year over health reform, has spent more.

The banks are making a list and checking it twice. And we shouldn't forget that during his run for the White House, the finance sector filled Obama's stocking with $39.5 million worth of campaign contributions, more than for any other presidential candidate.

God bless us, every one!