"Men of a Certain Age," "Community": The meek inherit your TV

Lovable losers make a prime-time comeback, thanks to Ray Romano and some community college misfits 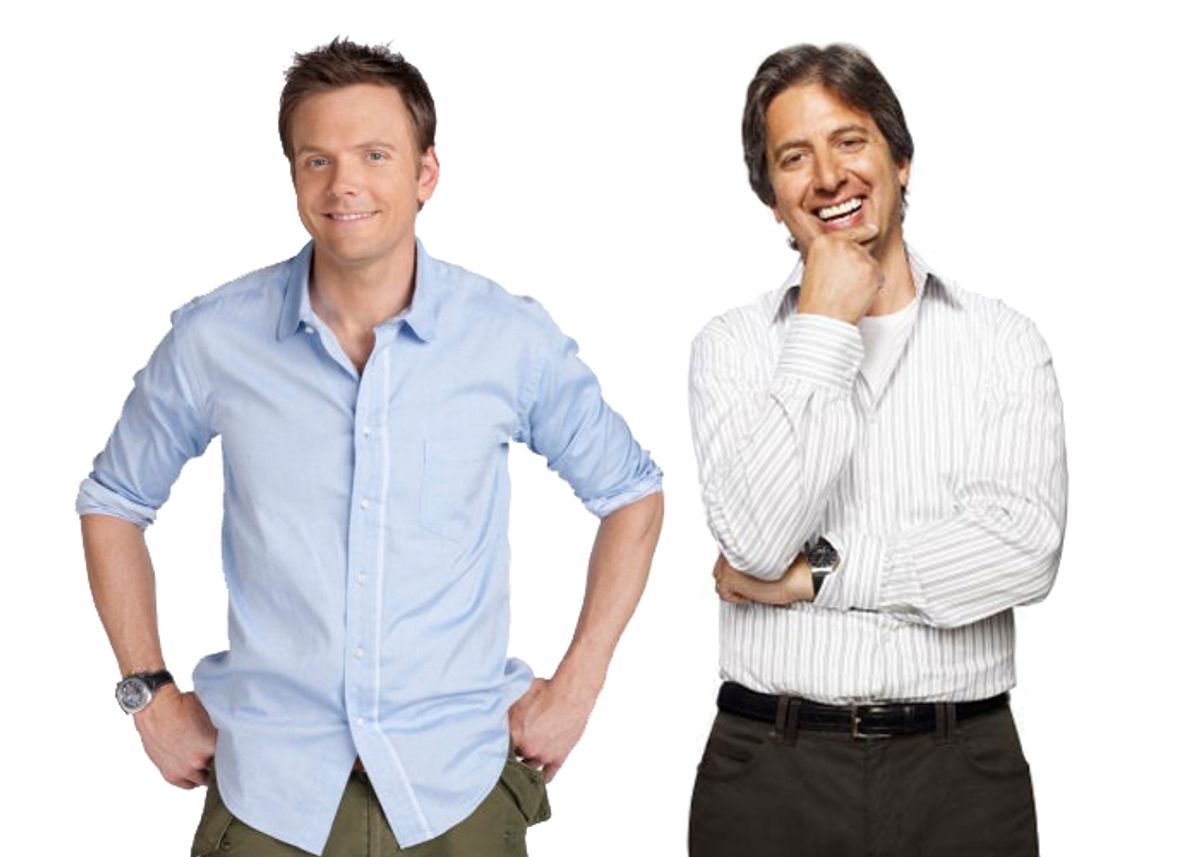 Humility is making a comeback. Most of us have been eating humble pie for a while now, but if you're not among our ranks, we'll be happy to cut you a slice and shove it down your throat, posthaste.

The truth is, we still strongly encourage supernatural megastars like Tiger to sample a wide range of extravagantly festooned, fat-lipped trollops. After all, what good is international stardom and huge piles of cash if you can't jet off to far-flung locales where exotic sea donkeys frolic, raising their sculpted button noses in the air to sniff out large currency transactions? We want big deal athletes like Tiger to cavort with the rarefied porn porpoises, resting only occasionally to high-five themselves in the bathroom mirror. And we want these pouty harlots to tattle on the guys in tabloid stories accompanied by extra fancy photos of the girls in question bent over pool tables and the like.

The meek shall inherit the mirth

Since we're damned either way, I'd rather hang out with the humble crowd. Personally, I feel most comfortable among people with disheveled hair and outdated shoes who don't have enough time or money to do much of anything beyond loading and unloading the dishwasher over and over and over again.

That's why I love "Men of a Certain Age" (10 p.m. Mondays on TNT). This low-key dramedy (which I first covered in late October) about three middle-aged friends is a celebration of humility and down-to-earth dorkiness. Its three lead characters are the antithesis of the macho hero types we're used to seeing on TV. They aren't dashing and suave. They aren't all that successful. They aren't even very confident. They pace and sweat. They eat too many doughnuts, then worry that they look fat in these pants.

These three guys may be my favorite male characters on TV right now. Because, while humble pie may be gaining in popularity, the small screen is still dominated by Jack Bauers, tough guys who are loath to open up and express their feelings until a man in a dark suit walks in and injects something scary into their arms. They'd rather strangle the life out of someone with their bare hands than admit to occasional moments of self-doubt.

But "Men of a Certain Age" proves that self-doubt can be sexy. Take Joe (Ray Romano), a neurotic mumbler, prone to circular thoughts and self-deprecating asides. Joe owns a party store and struggles with a gambling addiction. He's getting over his ex-wife and trying to have a good one-on-one relationship with his kids. Joe occupies this odd nowhere land between success and failure, between middle age and retirement, and he does so in a distinctly male way: Sometimes he can seem like a handsome, charming, funny guy, other times he just seems like an average Joe, not all that smart, not all that outstanding, not all that together. And every now and then? He seems like a complete loser. In other words, he's a lot like just about every man you know.

But let's be clear: I use the words "complete loser" with great affection. Just look at Owen (Andre Braugher), a car salesman who works for his (arrogant, bossy) dad. Owen eats too much, and he's diabetic. He's a deeply principled guy, but most of the time he feels like his principles just get in the way of being able to live a normal life. This Monday's episode, in which Owen decides to give every customer a fair price on a new car, is just classic. I won't spoil it, but the cost of sticking to your principles becomes clear to Owen pretty quickly.

Likewise, I love the upcoming episode in which Owen angrily discovers that Joe's ex-wife isn't giving Joe an accurate picture of her life after their separation. The more those around him shrug the whole thing off, the more angry Owen gets. He feels like he's the only sane person in the world, but everyone is treating him like he's the crazy one. Everything about this character feels genuine -- he's the guy who, despite having a reasonably good sense of humor, tends to expect too much of everyone and take everything too seriously. Even so, Owen might be the most heart-wrenching and lovable male character I've ever encountered, thanks in no small part to Braugher's pitch-perfect performance.

But maybe what really makes "Men of a Certain Age" so irresistible is the implicit admission that, for some reason, after the age of 45, most men are about 50 million times more humble than they were when they were 25. At 25, men see themselves as rulers of the universe. At 45, those who aren't actually ruling the universe see themselves as fallible, sometimes for the first time in their lives. (Women feel invincible from age 24 to age 25 1/2.) When men finally join us at the humble pie buffet, it's cause for celebration.

Although its three lead characters are butting up against old age and feeling overwhelmed by their own limitations in ways that could be depressing, in fact this drama is smart and moving and, above all, a real pleasure to watch week after week. And unlike other male-centered dramas and comedies that have come and gone over the years, "Men of a Certain Age" doesn't have even the slightest trace of hostility or condescension toward women in its subtext. Most of all, this show reminds us that comfortable, well-worn friendships are more satisfying and sweet than all of the gold and golden-haired harlots on the planet. (Or at least, that's what we'll keep telling each other.)

But while we're on the subject of friendships and humility, let's not forget NBC's "Community" (8 p.m. Thursdays), which has been baking up a fresh humble pie for weeks now, to great comic effect. From retired moist towelette magnate Pierce (Chevy Chase) to fallen lawyer Jeff (Joel McHale) to lonely divorcee Shirley (Yvette Nicole Brown) to former star student Annie (Alison Brie), the denizens of Greendale Community College share a strong bond, the bond that comes from being humbled beyond all recognition.

In fact, "Community" derives most of its charms from its humble setting and the humbling circumstances of its characters. On this show, even the bullies are humble. "Give me a winter doodle!" a bully named Mike growls at Abed (Danni Pudy) on the show's latest episode. "If you're trying to be menacing, maybe don't call the cookie by its name," advises Jeff.

Of course, part of being humiliated daily by the provincial, hokey nature of these characters' surroundings includes being oppressed by a steady flow of p.c. awkwardness. "Rumor has it that nondenominational Mr. Winter is on his way to the student lounge!" the dean announces over the loudspeakers in the same episode. When Mr. Winter wheels into the lounge with the eerie Greendale Community College "human being" mascot in tow, he bellows at the crowd, "Ha ha ha! Merrrry happy!"

But then, "Community" always does a great job of exposing the creepiness (not to mention the impossibility) of the utterly inoffensive, inclusive lifestyle. When Shirley invites the whole group to her Christmas party, she's shocked to discover that none of the other members of the study group are Christian. Shirley quickly tries to save face by encouraging each of them to bring "a trinket or doodad from your philosophies" to the party, so Annie brings a little menorah (which Shirley promptly shoves into the Christmas tree to hide) and Pierce, who claims to be a Buddhist, brings a Buddha-shaped bong. The hopelessness of honoring our cultural differences has never been more clear.

But my favorite Möbius strip of p.c.-ness was offered in this priceless exchange between Jeff and Troy from an episode a few weeks back, in which Jeff tries to inspire Troy to play football again.

Jeff: I'm saying you're a football player. It's in your blood.

Ultimately, though, just like "Men of a Certain Age," what we find in "Community" are a scrappy group of friends, relying on their mutual support to pull them through this very trying (and humbling) time in their lives.

But then, humility, like friendship, does make it easier to look on the bright side. As Jeff once told Pierce, "If life is just a series of ridiculous attempts to be alive, you're a hero to everything that's ever lived."

Community I Like To Watch Men Of A Certain Age Television