The freshman had a stroke 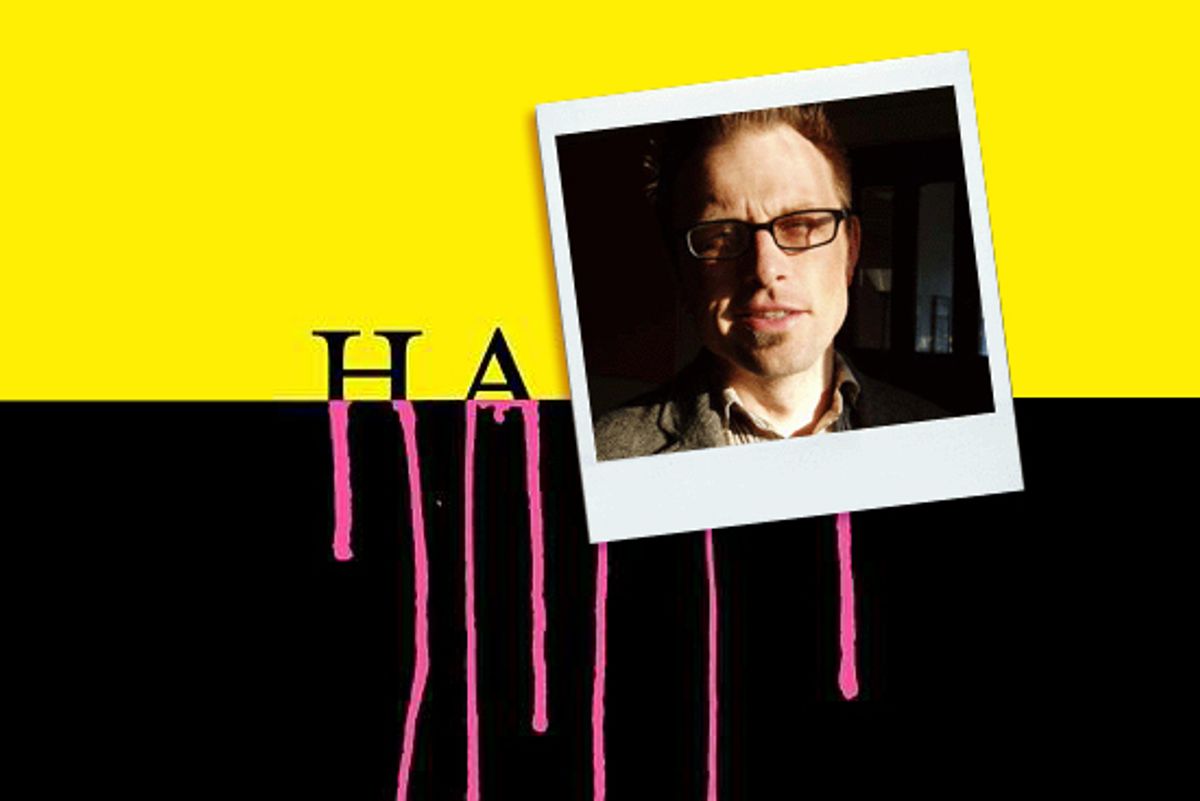 Although many people think of the trauma memoir as a women's genre, some of its most popular practitioners have been men. The authors of these tend to fall into one of two categories: the quirky, woebegone oddball (Augusten Burroughs) and the blustering bad boy (James Frey). Each type has its own weakness: An excess of wacky family antics starts to look like shtick, and it will eventually occur to readers to wonder if that bad boy has sufficient cause to be so friggin' angry and self-righteous.

Variations on each theme seem to be published every month. Of late, in the quirky camp, there's cartoonist Jeffrey Koterba's "Inklings," about growing up with Tourette's syndrome and a father who not only had it too, but also filled the house with broken TV sets. Colin Broderick's "Orangutan" falls into the bad-boy category (Irish immigrant division), complete with multiple "I was so fucked up last night, man!" anecdotes, swaggering yarns about his forays into crack dens and the obligatory genuflecting before Charles Bukowski. Neither memoir is particularly exceptional, although Broderick preempts his critics by offering up a prefatory "fuck you": "If you don't like it, I don't care," an author's note explains. "Stop whining and go write your own damn book." Believe me, Colin, they will.

But as for Alex Lemon's "Happy: A Memoir,"

well, this one is something special. Lemon certainly had a peculiar upbringing; his mother is an eccentric hippie sculptor who goes out for groceries and comes back with thrift-store junk ("For the art, Ali, for the art!"). She told his childhood friends that the rotary phone on her ancient car's dashboard called the moon. As for the bad-boy angle, the book begins with Lemon wallowing in the squalor of his dorm room at Macalester College in Minnesota, where he seems to be majoring in baseball, beer, puking and cheerfully yelling "Fuck you, you assholes!" at his friends. Granted, when Lemon likens his mom and stepfather to "a weary 'American Gothic,' if it had been painted by Thomas Hart Benton," or when he e-mails Rilke poems to his girlfriend, there's a hint that he's more cultured than the average jock. Still, the most widely used of his many nicknames is "Happy," and it nails his social role in his freshman year: the guy who's not too complicated and always grinning.

That sunny reputation may be one reason why Lemon -- who began to experience periods of numbness, dizziness and "bouncing" vision -- took so long to get his troubling symptoms checked out. In time, vertigo and the sensation that his body was "filled with asphalt" sabotaged the "sweet music" that "usually floods me when I play baseball." When his girlfriend finally nagged Lemon into seeing a doctor, he learned that he had a "vascular malformation" on his brain stem -- not uncommon, apparently, but Lemon's lesion had taken the unusual step of bleeding into his brain.

A stroke is not the sort of misfortune that an otherwise fit 19-year-old expects to weather, and Lemon coped poorly. Forced to sit out his team's games, he drank, smoked pot and popped pills: "I don't want to be alone, but I can't stand the people around me, so I stay as fucked up as I can all the time." It's a strategy he'd pursued in the past, as a way to avoid thinking about the older cousin who molested him as a child, and the concurrent fear that this experience would cause him to do "terrible things." He cheated on the girlfriend he adored. He shoplifted and picked fights with his best friend.

Two years into a tentative recovery, Lemon suffered another stroke. "Fuck me," he thinks, plummeting into a bleak depression. "My brain is bleeding. It won't stop bleeding ... I feel like a pint glass, slowly filling, brimming over, bubbling with blood." He decided to opt for surgery, an extremely risky proposition given the location of the lesion, and a procedure only the most skilled of neurosurgeons would attempt. "This," his doctor tells him pointing to the spot on a diagram of the brain, "is some very pricey real estate."

The rest of "Happy" relates the surgery and Lemon's long, grueling and only partial recovery afterward. (He now teaches at Texas Christian University and has published three books of poetry, which no doubt explains the occasionally overworked prose here.) In his worst moments, he seized up with remorse, convinced that "I only know how to return all of the love people give me with cruelty." This, however, is hard to believe, given his friends' persistent efforts to keep him close. Some of the most remarkable and moving passages in "Happy" depict how young men whose vocabulary for affection is limited to arm punches and mock insults find a way to convey their love for each other. What's moving is that they try; what's remarkable is how well they succeed. Lemon's best friend, undeterred by behavior he attributes to Lemon getting a transfusion of "asshole blood," sneaks into his buddy's hospital room, hugs him and asks, "How they treating you on the inside?"

The real hero of "Happy," however, is Lemon's mom, who wrangles him through months of physical therapy yet refuses to let him beat her at Scrabble. She's a middle-aged version of her son, profane and chipper; when he suggests they both get the same Voltaire quote ("Paradise is where I am") tattooed onto their backs, she even seems to consider it for moment. Yep, this is the story of a boy and his mother, but one whose tenderness sneaks up on you while you're distracted by all the blood and booze and hollering. The two of them can talk about nearly anything, but don't always have to. What Lemon and his mom have is that rarest of things in a trauma memoir, a parent-child relationship that is more than merely "functional." It's funkily, goofily, supremely life-affirming. Make that lifesaving. "We're all going to die," Lemon's mom reminds him one afternoon while zooming past her jogging son on a bicycle, "but not yet! Not today!"