Directors of the decade: No. 7: Steven Soderbergh

He may be frustratingly opaque and comically prolific, but he isn't afraid to gamble -- or fail 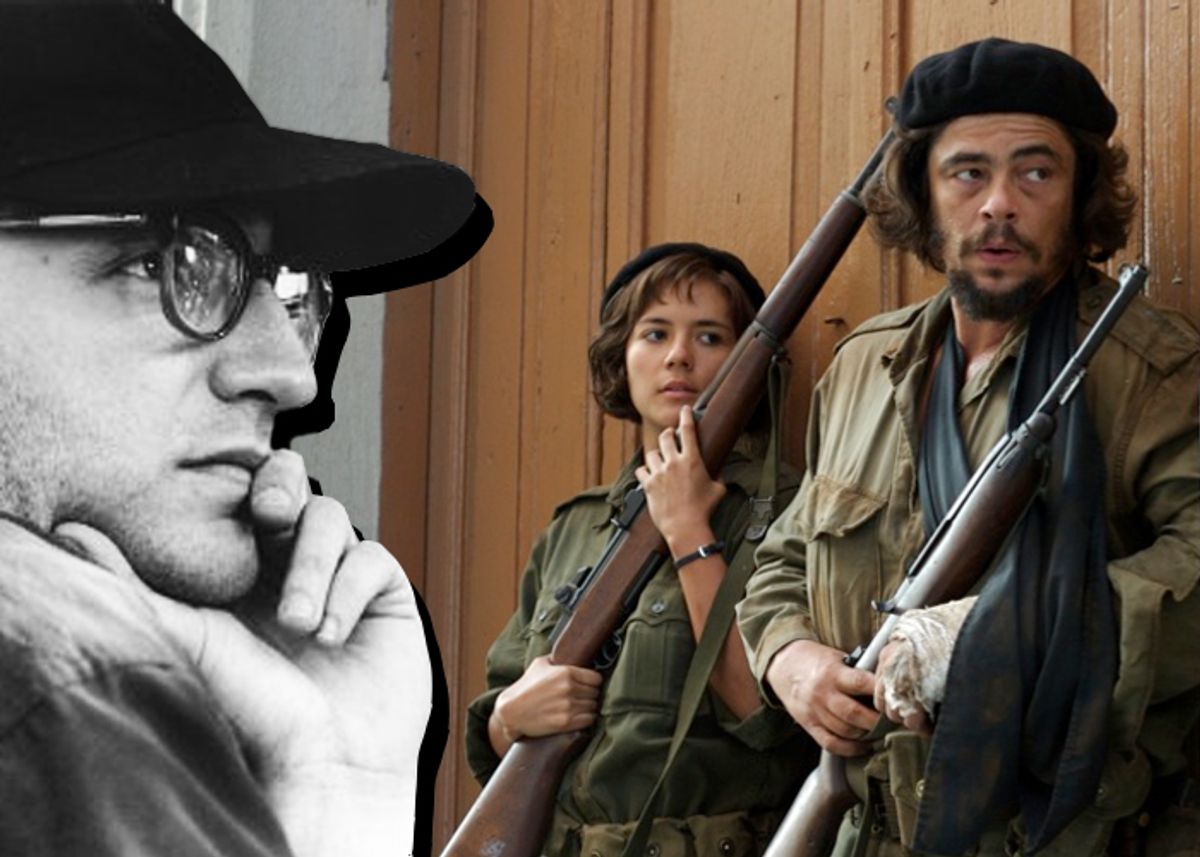 Steven Soderbergh has directed 17 features and produced two TV series in 10 years, often working simultaneously as director, producer, co-writer, cinematographer (under the pseudonym Peter Andrews) and editor (as Mary Ann Bernard). The sheer volume of his output, coupled with his technical daring, formal playfulness and versatility, beg a number of questions. To wit:

Is Soderbergh a great director making movies in order to explore life, art and his own tangled self, or a man who struggles to find things to say in order to justify making movies? Is Soderbergh's work united by strong thematic and conceptual threads or by sheer enthusiasm? How is it possible that Soderbergh could be so prolific without turning into a hack? Can any man this fearsomely productive have anything resembling an actual life? Or is the distinction between an actual life and a filmed life more or less moot in an age of surveillance, media and society-wide navel-gazing, an age in which every corner of reality has an aspect of the virtual? And if Soderbergh were ordered by some higher power to go 12 months without picking up a camera, would he emerge a stronger, deeper and more emotionally accessible filmmaker, or be found dead of liver failure in a skid row motel, the room's TV screen endlessly replaying the DVD menu for Jean-Luc Godard's "Contempt"?

And why put Soderbergh on a list of important filmmakers when he hasn't made a paradigm-shifting, spotlight-grabbing conversation piece since 2000, when he released "Traffic" and "Erin Brockovich" and won fistfuls of awards for both?

I have a definite answer to that last question: Because Steven Soderbergh is, in every conceivable sense of the phrase, state-of-the-art. He's a total filmmaker, with all the splendor and baggage the adjective and noun imply.

The other questions I can't answer because I can't get a handle on Soderbergh. I'm not sure anyone can. To rework a great line from "The Limey," in some ways his vision seems less a vision than a vibe. And the elusiveness of every aspect of this multifaceted filmmaker -- the question mark at the center of his 20-year career -- seems inextricably bound up with the way that changes in technology and distribution have made filmmaking (now more often videomaking) a part of daily life.

From the high-profile output of some of Soderbergh's nearly-as-workaholic contemporaries (Clint Eastwood, Spike Lee, Michael Winterbottom and Takashi Miike are also lifetime members of Filmaholics Anonymous) through the rarely distributed microbudget indies cranked out by the thousands each calendar year on down to the home movies and amateur music videos and cartoons and found-footage mash-ups that dominate YouTube, we've become a society of filmmakers -- people who instinctively view life as if it had a frame around it, even if we're not consciously aware that we're doing so. Life and movies, documentary and drama, virtual and real have become a big blur.

Soderbergh anticipated all this in his semi-autobiographical 1989 debut, "sex, lies and videotape." That breakthrough indie was built around a drifter named Graham (James Spader) who punished himself for sexual and romantic sins by withdrawing into a voyeuristic cocoon, videotaping women's rawest sexual confessions and presumably jerking off to them. (I say "presumably" because Graham frankly admits that he's "incapable of getting an erection in the presence of another person," and he's never seen pleasuring himself while watching the videos -- just staring blankly at the screen as if hoping some cathartic meaning will emerge.) Many of Soderbergh's subsequent films were likewise concerned with the allure and consequences of voyeurism and self-deception -- with the thrill that comes from watching and the fear of being watched, and every person's daily struggle to present themselves as they wish to be seen and avoid confronting what they are. This fascination flowered in the aughts as the director embraced video (from consumer-grade digital to hi-def) and became a one-man band.

Soderbergh's semi-improvised 2002 feature "Full Frontal" could have been titled "more sex, lies and videotape," for its hand-held mini-DV visuals, its exploration of how the clichés of movie romance distort our expectations of the real thing, and its fascination with lonely and deluded people writing self-flattering autobiographies in real-time via monologues. To quote critic Daniel Kleinfeld, "The question 'Full Frontal' worries at obsessively is: If we imagine love through an unreal medium, does that threaten the reality of our love?"

This year's "The Girlfriend Experience" might have been the third panel in this unofficial triptych. It shows how social media have not just made people's constructed selves seem more real -- almost tactile -- and empowered individuals to enforce boundaries on friendship and intimacy, creating their own little alternate realities and denying entry to those who can't or won't validate it. (The movie's title refers to what a high-class prostitute's johns all want: not a girlfriend, but the girlfriend experience -- not intimacy but a carefully circumscribed, mutually agreed-upon imitation of intimacy.)

The TV series that Soderbergh coproduced with frequent collaborators George Clooney and Grant Heslov -- HBO's underrated "K Street" and "Unscripted" -- dug into this phenomenon as well. The former showed how legislators, consultants and lobbyists were all performers in a drama titled "Washington, D.C." The latter explored the world of actors, and showed how the act of committing imagination to fiction could falsify offstage emotion and distort perceptions of life.

Another one of Soderbergh's fruitful blurs is the interaction of art and entertainment, underground filmmaking and Hollywood. Whether he's working with $50 million budgets or pocket change, you never know which part of the spectrum he'll emphasize. And his directorial decisions are usually as interesting (often more interesting) than the action on-screen.

Soderbergh gave "Erin Brockovich" touches of grubby, Cassavetes-like spontaneity that grounded the film's give-the-star-everything screenplay and made the whole thing bearable. Soderbergh's canny strategy is exemplified by that early moment where Erin stands in her kitchen late at night eating pineapple out of a can. She hears her infant stir awake. Rather than drop everything and run to check on him, she listens to see if he'll go back to sleep of his own accord, and when he does, she continues eating her pineapple.

Soderbergh's pan-national, multi-character social drama "Traffic" was natural Oscar bait. But Soderbergh mostly avoided pandering, and instead balanced the film's commercially required "big" scenes with smaller moments of disappointment, ambiguity and paralysis, and gave it the look and feel of a hit-and-run indie (with jagged cutting and photography that Soderbergh, working as his own cinematographer for the first time, freely admits was pretty crude). He shot his no-budget neorealist experiment "Bubble" in a very classical style, nearly Kubrickian in its coldness, at a time when most directors working at that level (including Soderbergh) reflexively worked in the hand-held hokey-pokey mode. He seems to want to keep surprising people, most of all himself -- an admirable desire.

When Soderbergh engages head-on with film history, the results are spottier. His reworking of Andrei Tarkovsky's "Solaris" was considered as brazen an act of effrontery as Gus van Sant's "Psycho" remake, but even though it was too unfocused (narratively and visually) to be as devastating as it plainly wanted to be, it was fascinating and altogether defensible, because it was as intuitive as the original was analytical. (It's probably Soderbergh's second most moving film after "The Limey" -- still his masterpiece, and one of the most formally audacious commercial features of the last quarter-century.) "The Good German" was a disaster from which everyone involved was lucky to escape -- shot with old movie equipment but not fully cognizant of old movie grammar and texture, and sullied by modernizing touches that seemed more glib and crude than shocking or revelatory. "Che," while honorable and serious in its determination to be an anti-biopic biopic, left me cold; it felt too dry -- too much like homework, or a Ken Loach film without the spark of righteous fury that makes Loach so valuable.

But I'll give Soderbergh this much: He fails big. His missteps are more fascinating than most directors' successes. And even when he's selling out, he's not really selling out.

He gave the super-slick "Oceans 11" personality by putting the project's express-train-to-the-box-office shamelessness at the center of the story; it's a faintly postmodern heist picture that presents its thief characters as actors grabbing a ton of money by putting on a great show. Its first sequel, "Oceans 12," was a dissection of the original, a deconstruction of a deconstruction that denied nearly every satisfaction people took from the first movie. Its masterstroke was having costar Roberts play a character who looked so much like Julia Roberts that she ended up being enlisted by the crooks to impersonate Julia Roberts. A more prankish summation of movie stardom is hard to imagine, and thanks to Soderbergh's interest in the intent and mechanics of role-playing, the fact that Julia Roberts was rather boring playing Julia Roberts seemed not like a failure, but the whole point of the exercise. (The movie's stubborn determination to piss off everybody who had fun watching the first one was a statement, too -- the post-Godardian intellectual filmmaker's version of what Martin Scorsese did in "Cape Fear," punishing the audience for wanting that sort of movie, and perhaps expressing his disgust with himself for being able to give it to them.) The third "Oceans" film pulled the franchise into the headspace that birthed "sex, lies, and videotape," "Full Frontal" and "The Girlfriend Experience," showing a bunch of old dogs learning new technological tricks. The result was a weightless but clever time-killer that might have been as autobiographically driven as Soderbergh's smaller films, considering it showed hardheaded experts adapting their skills to prosper in a changing world.

Soderbergh should be insufferable, yet he and his films are charming, sometimes outright self-deprecating. This is the man who titled his quasi-memoir "Getting Away With It: The Further Adventures of the Luckiest Bastard You Ever Saw," devoted much of the book's page count to transcripts of conversations with one of his filmmaking heroes, Richard Lester, and adorned the book's cover with the most hideously clownish photo ever taken of anyone, ever. This is the man who invited the writer of his 1999 film "The Limey," Lem Dobbs, to sit in on that film's DVD commentary track and ream Soderbergh for altering his script. To act like this, you have to be supremely arrogant, supremely masochistic, or so devoted to your craft that you have no ego to bruise.

I find him frustratingly opaque and half-baked a lot of the time -- too obscure in his motivations, too much a slave to the adrenaline rush of process, and although I've praised some of his work this decade (particularly the HBO series), I've beaten up on him, too, giving "Full Frontal," "Oceans 12," "The Good German" some of the harshest reviews I've ever published. At the same, time, though, I'll admit that revisiting Soderbergh's output while researching this series made me see patterns I'd overlooked, and wish I could take back some of the negative things I've written about him. It's hard not to appreciate his grounded attitude and be grateful that such an idiosyncratic and decent filmmaker can prosper in a mostly vicious, stupid industry. And wouldn't you know it: Just when I was ready to say that he hadn't made a truly great film since "The Limey," along comes "The Informant!" a satire on business ethics and self-delusion that's as corrosively funny as the best of Billy Wilder.

Soderbergh is cinema in the aughts. That statement, like so many Soderbergh films, can mean whatever you want it to mean. But he should take it as a compliment.