It doesn't pay to be polite

8. President Obama bowed to a foreign leader. The United States of America was never the same 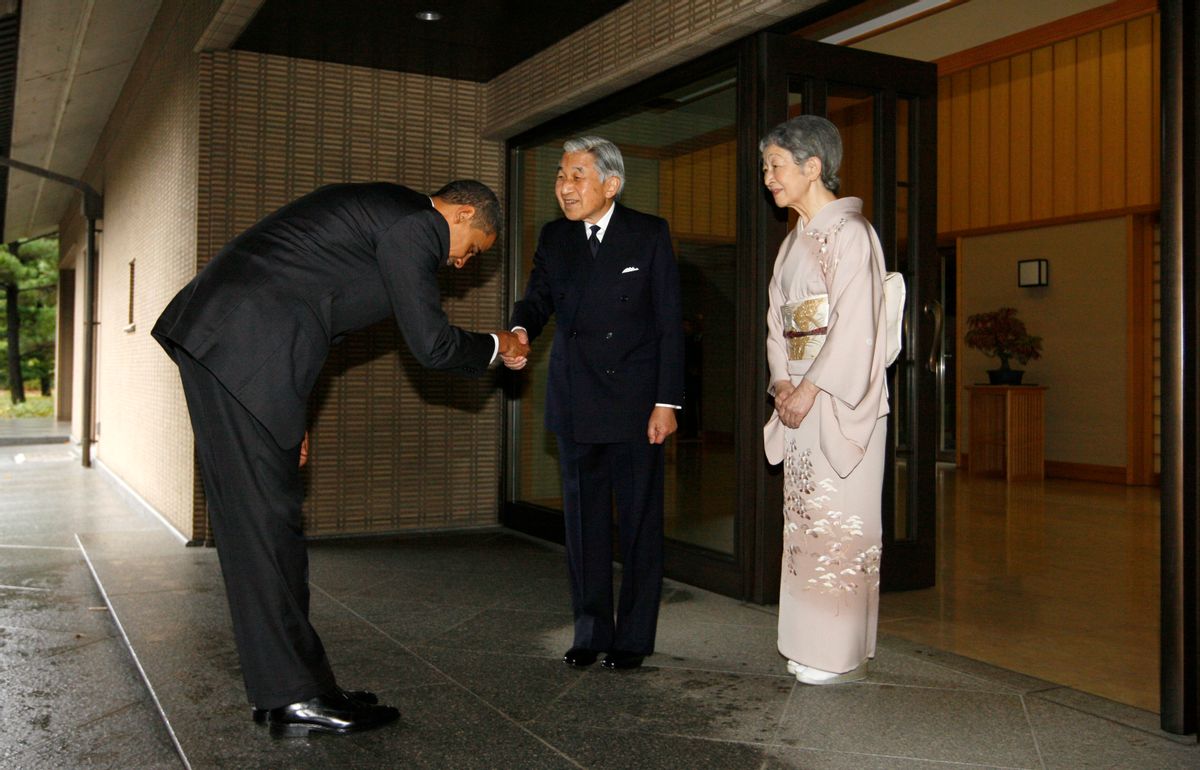 President Barack Obama bows as he is greeted by Japanese Emperor Akihito and Empress Michiko as he arrives at the Imperial Palace in Tokyo, Saturday, Nov. 14, 2009. (AP Photo/Charles Dharapak) (Charles Dharapak)
--

It could have been a controversial moment: the president of the United States, bowing to a foreign leader. Was the commander in chief showing weakness -- or worse, fealty to some power besides the one that stands tall for baseball, Mom and apple pie?

Except that it happened in 1971, and the president involved was Richard Nixon (shown here bowing to then-Japanese Emperor Hirohito). Of course, Nixon would wind up being accused of plenty of un-American activities, but most of them involved blithely disregarding the Constitution. Yet somehow this year, when President Obama met with foreign leaders, right-wing commentators and the media alike seized on a couple of bows as if Obama had torn up his passport live on television.

"Barack Takes a Bow: The President Shows Fealty to a Muslim King," the Washington Times editorial page sneered in April, after Obama appeared to bend down when greeting Saudi King Abdullah at the G-20 summit in London. "Symbolism is important in world affairs," the paper declaimed. "By bending over to show greater respect to Islam, the U.S. president belittled the power and independence of the United States." When Obama bowed again in November, to Japanese Emperor Akihito, more of the same followed. Outraged patriots everywhere reacted badly. Americans simply don't bow to foreigners, the theory went, and especially not presidents.

"This president seems quite willing to embrace weakness as a position for the United States," Fox News' Brit Hume said on the network's "Fox News Sunday" in November. "I mean, the bowing and scraping that we see -- Saudi Arabia we saw it. We saw it on this trip in Japan. These kind of gestures -- they wouldn't mean anything if they didn't seem to be of a piece with the general approach that the president has taken."

The problem with that line of attack is that it's easier to list the presidents who have bowed to foreign leaders than to list the ones who haven't. Besides Nixon, there's also Bill Clinton, who drew mild mocking, but not the full outrage treatment, for bowing to Akihito in 1994. His predecessor, George H.W. Bush, bowed to Hirohito's body while attending his funeral in 1989. Dwight Eisenhower appears to have been unable to resist bowing to almost anyone he met -- one liberal blog compiled a photo montage showing Eisenhower bending at the waist before a pope, the wife of an Italian prime minister, a Greek Orthodox primate, and French President Charles de Gaulle. And despite the huffing and puffing from the right, the ban on American presidents bowing that they all kept citing doesn't actually seem to exist. Even Fox News had to admit the bows "may not have violated any official protocol."

So while it's true that Obama did bow to a couple of foreigners, this still counts as one of the year's bogus stories because there's just no story. Plenty of presidents have done the same thing. There seem to be new rules for this one.