Welcome to the fashion funhouse

Crystal Renn is just a hot model to the casual observer -- but in the industry, she's a revolution 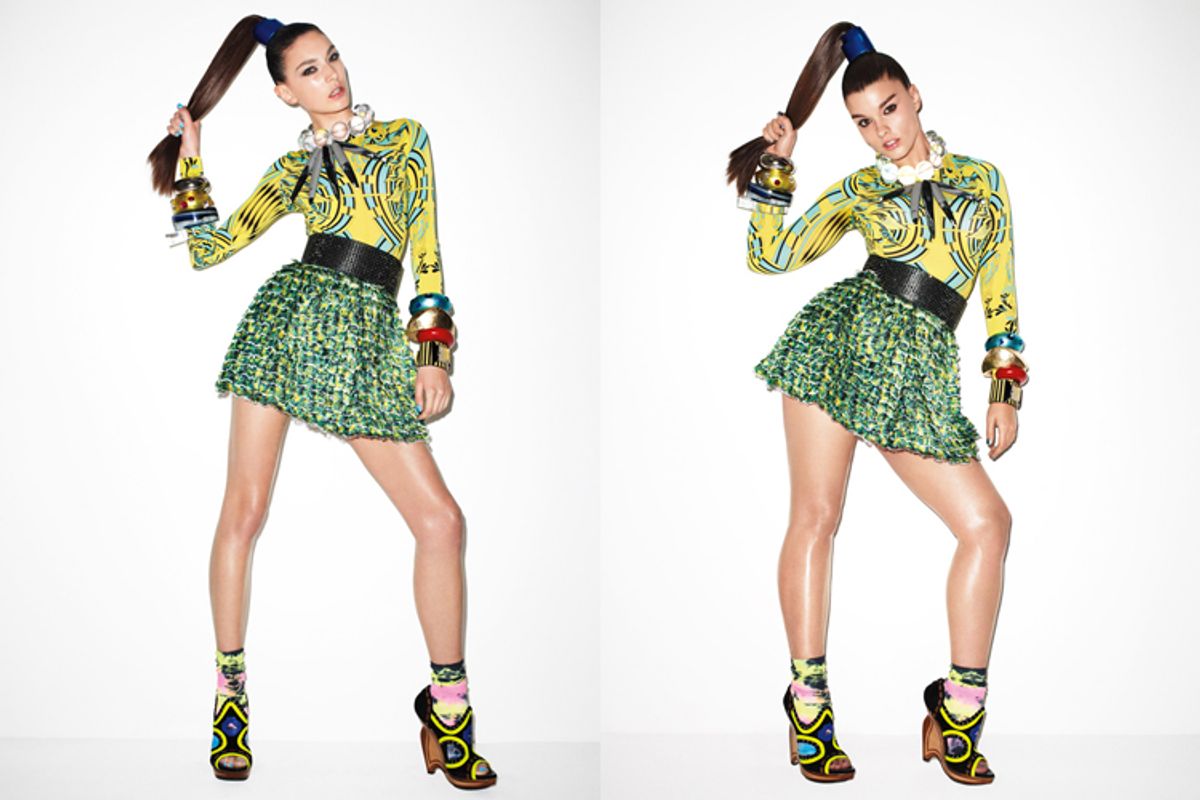 "The message is clear: High fashion has no size limit," writes Ben Barry, CEO of an eponymous Toronto modeling agency that specializes in diverse body types, in a gushing blog post about V magazine's upcoming "One Size Fits All" spread. The spread features size 2 model Jacquelyn Jablonski and size 12ish model Crystal Renn in matching outfits "by high-fashion designers including Ralph Lauren, Versace and Dolce & Gabbana -- all famed for favouring very thin models on their catwalks," according to the Daily Mail, whose headline echoes Barry's enthusiasm: "Plus-size Crystal Renn takes on a typically slim model to prove fashion CAN flatter any figure."

Now, I'm a fan of both Crystal Renn and baby steps in the right direction, but "any figure"? "No size limit"? Really? As Broadsheet's Mary Elizabeth Williams observed, "They're like two inches different." Her 9-year-old daughter Lucy, reading over Mom's shoulder, spoke for every average woman I know: "That makes the fashion part of my mind hurt."

But the fashion parts of our minds have little to do with what goes on in fashion professionals' minds. I got Barry -- usually a pretty darn good advocate for real body acceptance and diversity -- on the phone to ask if he seriously thinks this is all that revolutionary. Because as far as I can tell, high fashion still has a size limit -- to wit, a tall, well-proportioned U.S. 12 -- and even that's still more gimmick than game-changer.

But then, in the same industry where the 5-foot-9 Renn was pronounced "too heavy" at 98 pounds, the 165-pound version of her really is a tremendous departure from the norm -- and indeed, that's what Barry was getting at with his post. "I do see what you see," he laughs, but he reminds me that we're talking about the "fashion funhouse" here. "When real people who aren't in the industry talk about it, they have to, like, jump into a funhouse and realize they're entering a completely distorted world.

"What's revolutionary is the fact that they would even have a stylist dress a size 12-14 model and include her in this." That Renn is not only wearing the same designers and revealing cuts but the same striking colors and bold accessories as Jablonski is what makes him cautiously optimistic. "The argument is always that certain looks appear better on certain bodies, so they can only put a size 2 in a high fashion spread, because it 'looks better.'" Plus models, on the other hand -- and in the fashion funhouse, that means anyone wearing size 6 or above -- are usually dressed in "safe" -- i.e., "boring" -- clothes. Furthermore, as he noted in the blog post, V magazine "is at the top of the high fashion pyramid"; it's one thing for Glamour to toss its average-Jane readers some slightly larger models, but quite another for an industry leader to do so. "'Real' people are years ahead of the fashion industry, so much more advanced in their thinking and what they want to see," said Barry.

Which might explain why, when "real" people look at this ostensibly groundbreaking spread, we actually don't see two wildly different body types. As my friend Jess put it, "Renn just looks like the pre-Photoshop version of the other one" (a line that made Barry guffaw when I relayed it). Jess added that she'd recently watched a tutorial on using Photoshop's "Liquify" tool, and she was pretty sure she could slim Renn down to Jablonski's size, and vice versa, without much effort. Behold the results: Jess wanted me to stress that she's an amateur who wasn't aiming for perfection and only spent about 10 minutes manipulating the images -- which just underscores how much could be done by a professional taking his or her time. And that, says Barry, is what's really troubling about the V spread, and high fashion images in general -- because of course both Renn and Jablonski have already been retouched in the original photos. "Even the model who's a size 2, she doesn't even look like that," he points out. "We're still terrified to show love handles, cellulite, wrinkles. It's still artifice over authenticity, all in the name of 'art' -- that's always the argument." Those of us who think making a woman's head wider than her hips is something other than an expression of artistic genius are just philistines with no visual sense, evidently.

So yes, this side-by-side spread is a big deal in the fashion world, but that only proves how utterly divorced it still is from the real world. Jezebel's Jenna, a model herself, recently wrote about the busty but otherwise "highly typical (for a straight-size model)" Lara Stone: "The fact that she is seen as a different kind of model for her size is the ultimate indictment of the fashion industry's standards." From where my size 16-18 ass is sitting, the same is true of Crystal Renn -- but then, I don't live in the funhouse. Says Jenna, "Yes, plus-size models are still models, and the fashion industry still makes its money presenting women with images to aspire to that are, for most, unattainable and unrealistic. But if we can change the parameters of the beauty standard even just enough to accommodate tall, enviably proportioned young women who don't have 23-inch waists, then I'd still call that progress of a kind."