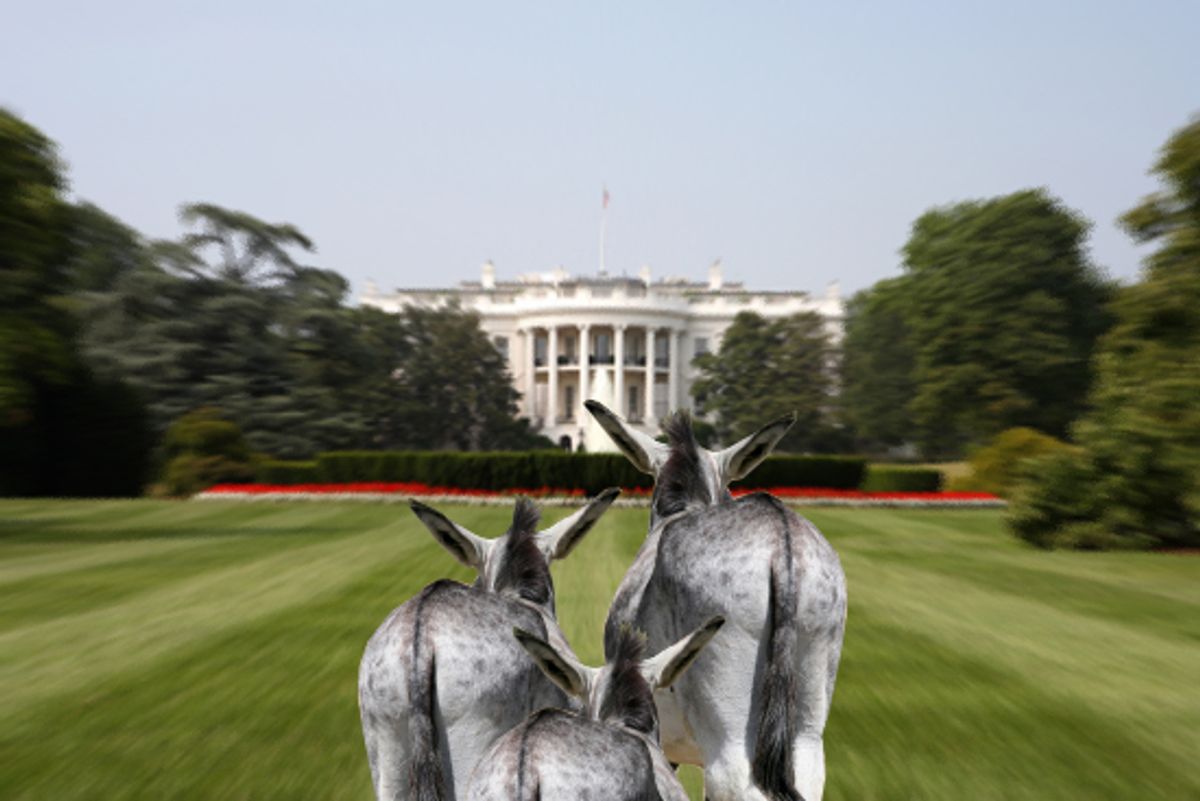 Does the growing rift between most progressives and the Obama administration represent merely tactical disagreements among people who share the same values and goals? Or is there a deeper, philosophical divergence on display?

In a thoughtful essay for the New Republic, "Taking Ideological Differences Seriously," Ed Kilgore of the Democratic Strategist argues that the divide within the Democrats is ideological. (See Glenn Greenwald's comments here). In an earlier Salon column I argued that Obama, like Bill Clinton before him and neoliberals in general, is a practitioner of "creeping subsidism" -- a strategy of subsidizing and incentivizing individuals and corporations to achieve public goals. Three examples of neoliberal subsidism have been in the news: bailing out giant financial firms instead of temporarily nationalizing them and putting them through bankruptcy; taxing Americans to subsidize health insurance companies to cover the uninsured; and deliberately increasing utility bills to indirectly subsidize Wall Street by means of cap-and-trade legislation. I contrasted the approach of President Obama and other "New Democrats" with the New Deal liberal tradition's preference for direct regulation, government social insurance and state capitalism in areas like infrastructure.

While Kilgore is associated with the New Democrats and I consider myself a New Dealer, his description of the contrast is similar to mine:

To put it simply, and perhaps over-simply, on a variety of fronts (most notably financial restructuring and health care reform, but arguably on climate change as well), the Obama administration has chosen the strategy of deploying regulated and subsidized private sector entities to achieve progressive policy results. This approach was a hallmark of the so-called Clintonian, "New Democrat" movement, and the broader international movement sometimes referred to as "the Third Way," which often defended the use of private means for public ends. (It's also arguably central to the American liberal tradition going back to Woodrow Wilson, and is even evident in parts of the New Deal and Great Society initiatives alongside elements of the "social democratic" tradition, which is characterized by support for publicly operated programs in key areas).

This is accurate, including the point that the neoliberals are inspired by Woodrow Wilson's relatively conservative New Freedom rather than the New Nationalism of Theodore Roosevelt or the New Deal of his cousin Franklin. Kilgore is also right when he says that rival factions are sometimes too quick to dismiss the philosophical foundations of the rival camp:

But ideology, however muddled, is part of what makes most politically active people tick. And if we don't talk about it -- and about differences in strategic thinking as well, which should be the subject of future discussions -- then all we are left with to explain our differences on this issue or that is questions of character. And anyone paying attention must recognize there's far too much of that going on. "Progressive pragmatists" -- the camp with which I most often personally identify, as it happens -- often treat "the Left" condescendingly as immature and impractical people who don't understand how things get done. Meanwhile, people on "the Left" often treat "pragmatists" as either politically gutless or personally corrupt. This is what happens when you don't take seriously other people's ideological and strategic underpinnings; whatever you gain in ignoring or minimizing differences in perspective or point of view is lost in mutual respect.

The center-left can learn from the right. Back in the 1950s and 1960s, William F. Buckley Jr. and the circle around National Review tried to promote a "fusionist conservatism" that would unite Cold War hawks, social conservatives and free marketeers in a single philosophy. But the attempt to create a common conservative public philosophy by blurring important differences was a miserable flop. By the end of the 1980s Buckley's so-called movement conservatism had been sidelined by three distinct and energetic schools of thought on the political right: neoconservatives, libertarians and the religious right.

Each movement was willing to focus on some issues rather than others, as the price of being part of a hoped-for lasting Republican majority. The neocons, for example, specialized in hawkish foreign policy, the libertarians in deregulation. But the distinct schools on the right remained more or less internally coherent; they never degenerated into single-issue movements. Neoconservatives to this day, reflecting their Cold War liberal origins, tend to be relaxed about big domestic government and social insurance programs. In the Bush years, for example, the Weekly Standard published a critique of Social Security privatization. And many libertarians and religious conservatives are isolationists who disagree with the GOP's hawkish foreign policy.

Each of the three schools of thought on the right has a comprehensive vision of all of society -- foreign policy, domestic policy, morality -- even if its operatives choose to emphasize only the issues most important to them. Each vision, moreover, is incompatible with the vision of the other right-wing factions. Libertarians would not want to live in a world designed by neoconservatives, who in turn would not want to live in a Christian fundamentalist theocracy. In short, there is no such thing as "American conservatism." There are three rights, which have a shaky alliance of convenience under the umbrella of the Republican Party. Instead of a broad church, there are three denominations.

Is it time to admit that the American center-left, like the American right, is divided into groups of people who may agree on defeating the Republican Party but otherwise disagree on fundamental values and goals? Kilgore identifies two groups -- "New Democrats" and "social democrats." I prefer to call them "neoliberals" and "New Dealers." Perhaps "progressive" could be used for the New Dealers, if neoliberals who call themselves "pragmatic progressives" would agree to surrender the term.

Along with the neoliberals and New Dealers, I would identify a third significant faction to the left of center -- ideological Greens. While remaining true to the conservationist heritage of the two Roosevelts, New Dealers need to distinguish themselves from pessimistic, technophobic and antinatalist Green Malthusians. You can't be a New Deal liberal and view poverty in either the American South or the global South as a problem of too many dark-skinned people instead of too little social justice and too little economic development. You can't celebrate FDR's Tennessee Valley Authority as a symbol of economic and social progress and condemn it as a monstrous assault on the purity of an idealized natural world in which humans, unlike other animals, are intruders. And because one of the achievements of the New Deal was to use federal investment to promote electrification, the automobile and industrialized agriculture, you can't be a New Deal liberal and weep for a vanished early-industrial world of steam railroads, trolleys, tenements and locally grown food. (For opponents of coal, Greens seem to share a surprising nostalgia for the densely populated, transit-based cities of the ephemeral steam engine era.)

If we distinguish neoliberals, New Dealers and Greens from one another, then the center-left coalition, at the level of first principles, is not a marriage of two partners but a ménage à trois. It resembles the ménage à trois on the right that unites libertarians, Christian conservatives and neoconservatives. Recognizing that there are indeed distinct and fundamentally incompatible public philosophies to the left of center does not prevent cooperation among the schools for common purposes. The three factions can work together to maintain a Democratic majority, just as the neocons, libertarians and social conservatives disagree on first principles but unite in elections to support Republicans against Democrats.

Democrats should learn from Republicans how to manage a ménage à trois.