5. One million teabaggers march on our nation's capital? Unfortunately, math has a well-known liberal bias. 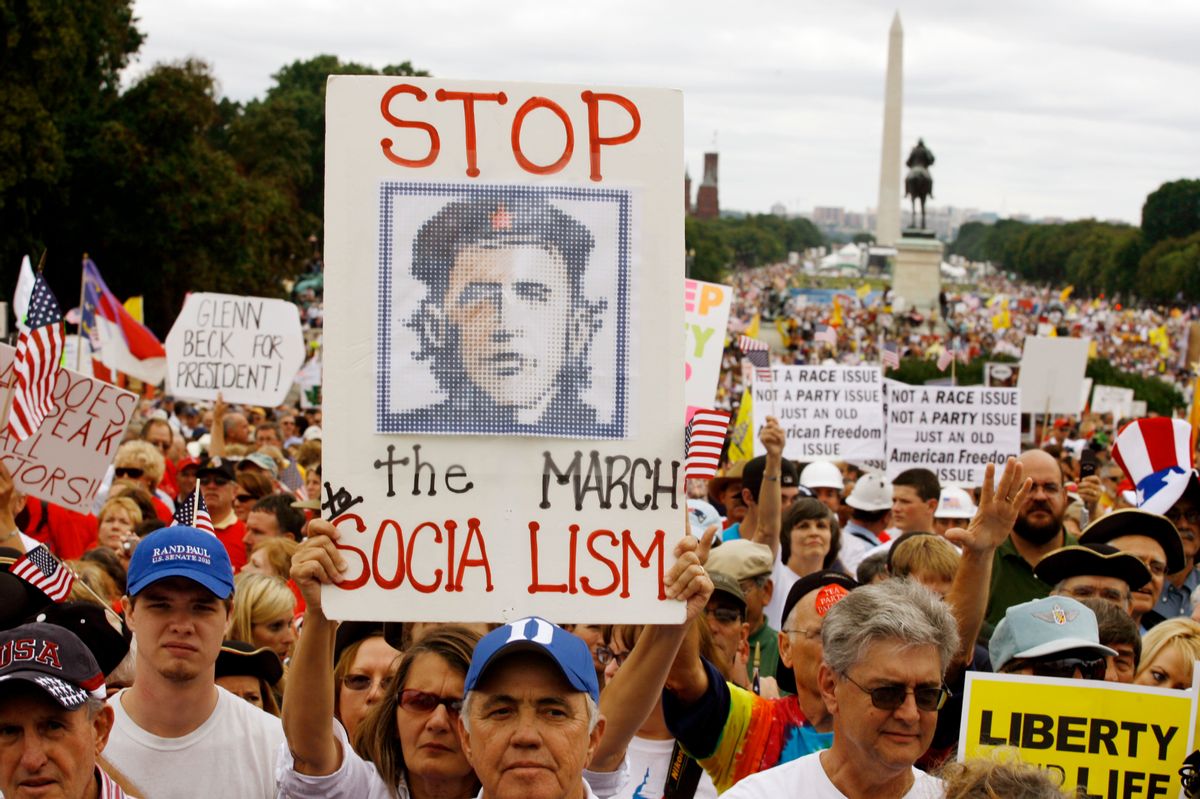 Demonstrators protest outside of the U.S. Capitol Hill with the mall in the background during the taxpayer rally in Washington, Saturday , Sept. 12, 2009.Thousands of fiscal conservatives have packed streets in the nation's capital to protest what they consider the federal government's out-of-control spending.(.AP Photo/Jose Luis Magana) (Jose Luis Magana)
--

Pop quiz time. A massive crowd gathered in Washington, D.C., this year, practically filling the National Mall and spilling over onto the nearby streets. More than 1.8 million people were there, all joined together by their common political views. Were they a) celebrating President Obama's inauguration, or b) protesting the way he's set the country on an inexorable death march toward fascist socialism?

The answer may depend on how closely connected you are to reality -- and also, to whether you're the kind of person who likes to fling tea bags around to show your displeasure with the idea of universal access to healthcare. Ever since anti-government protesters descended on Washington on Sept. 12, conservative bloggers, Republican lawmakers and tea party activists have boasted of the huge turnout they think they drew. "You have redefined gridlock in Washington," Rep. Marsha Blackburn, R-Tenn., told the rally, saying the highways around the capital were closed. Clearly, at least 1.5 million people were at the event; the only question, in the conservative imagination, was precisely how many more than 1.5 million showed up. Michelle Malkin decided 2 million was the right figure. A new documentary about the tea party protests quotes a woman passing along the rumor that there had never been a larger crowd in the District.

In fact, there was a record crowd gathered in Washington this year -- in January, for Obama's inauguration. The march in September, by contrast, didn't even come close. Authorities estimated the tea party rally brought out about 70,000 people, which is a pretty good turnout, but nothing for the history books. For anyone in Washington the weekend of the march, it was patently obvious that there wasn't anything exceptional going on. During the inauguration, the whole city was practically shut down by the influx of people; hotels were booked up, the Metro was impassable, taxicabs were nowhere to be found. None of that happened on Sept. 12. Within a few hours of the march ending, D.C. authorities sent out an e-mail that said any traffic disruptions caused by the rally were cleared up.

But perversely, the fact that the media wouldn't go along with the tea party myth has now become yet another example of liberal bias. A resolution introduced by House Republicans in October to commemorate the march refers to the "hundreds of thousands" of people who showed up. And by December, at a Washington premiere for the tea party documentary, former House GOP boss Dick Armey -- now the head of an anti-tax foundation funded by corporate backers -- was using the bogus crowd figure to bash liberal elitists, who couldn't possibly understand what was going on in the country.

"It is inconceivable to them that as many as a million people could get to Washington" for the protest, Armey said. Inconceivable, because it never happened.