Why Democrats must pass healthcare reform

I side with kill-the-bill progressives for the long term, but I say pass the bill in the short term. Let me explain 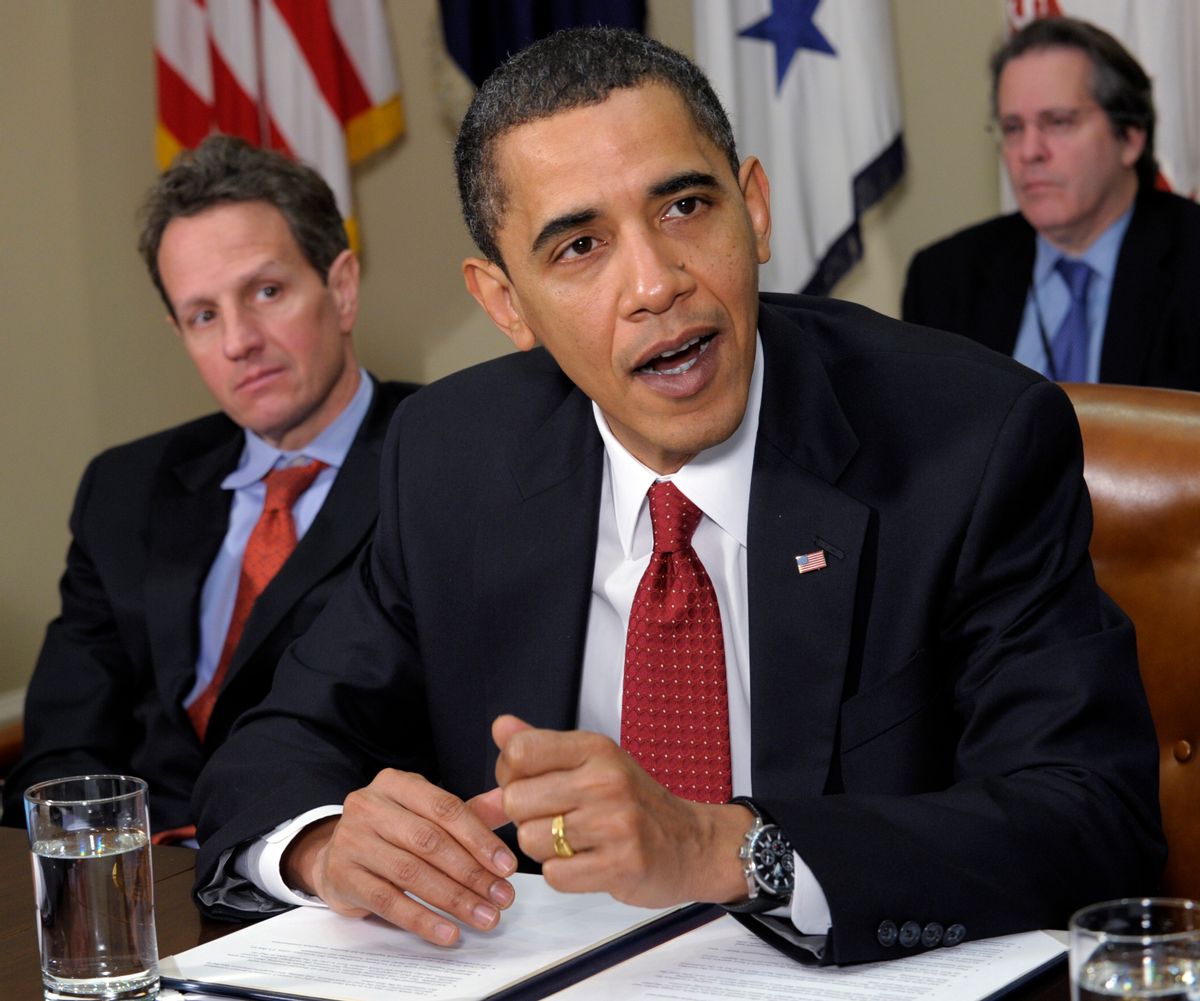 As we were editing Salon's Bogus Stories of 2009, I couldn't help thinking about the current impasse, among liberals, over the healthcare reform bill. It wasn't just that Sarah Palin's death panels were a bogus story -- yet one that hijacked the healthcare debate for weeks. Right now a fledgling bogus story can be seen on cable news every hour or so: The Democratic Party is about to self-destruct over healthcare reform.

Unfortunately, this could be one of those bogus stories that the media help turn into a self-fulfilling prophecy.

You can't watch cable news lately without some mainstream commentator hyping the infighting among progressives, usually in superficial and inflammatory terms. Chris Matthews described netroots opponents of the healthcare compromise as folks who "get their giggles from sitting in the backseat and bitching." CNBC's John Harwood told them to stop taking "hallucinogenic drugs," and Time's Joe Klein exhorted them (once again) to "grow up." From the other side, MSNBC's Dylan Ratigan blasted liberal reform-bill backer Rep. Debbie Wasserman-Schulz so hard he had to apologize to her, and Keith Olbermann promised to go to jail rather than buy insurance as the bill would mandate.

Even as progressives engage in an important and fascinating debate over strategy and policy regarding the healthcare reform compromise likely to pass the Senate, it's being covered as a clash of personalities: the "netroots/nutroots" vs. the pragmatists; the wonks vs. the activists, Jane Hamsher of FireDogLake vs. the Washington Post's Ezra Klein.

Of course, a few people on the netroots left have pushed their own specious story lines, comparing the sides in this debate to 2002's liberal split over the Iraq war. As someone who passionately opposed the war (to MSM ridicule) and thinks the coming healthcare reform compromise, while disappointing, is a deal worth making, I reject simplistic lefty schematics.

If you can only read one thing about this debate, read Glenn Greenwald's breakdown of the real fissures the bill is exposing within the party (where he finds merit in Jake McIntyre's 2002 Iraq vs. 2009 HCR positions). There is a genuine and justified concern among progressives that this bill enshrines an alarming corporatist Democrat view of "reform": Make nominally liberal social-service expansions safe for the private sector. That is absolutely what is going on.

But that's as far as the Democrats and the progressive movement have taken us to date. We have a lot more work to do. In my opinion, left and center Democrats need to compromise now, make good on their campaign promise to pass the bill and insure millions more people. And then progressives need to challenge the corporatist pillars of the party in rhetoric, legislation, and in elections, in 2010 and 2012, and beyond.

That's why when it comes to the current healthcare reform bill, I'm with the bill's opponents in the long term, and its liberal supporters in the short term. In the long term, I think the work progressives have done pushing for the public option has already made the bill a better bill. They will likely get more good policy provisions in conference committee. But their opposition is also crucial as a long-term organizing, party-development strategy. It's profoundly frustrating that there's no one on the left who has the clout of Sen. Joe Lieberman, I-Aetna, or Ben Nelson, D-Mutual of Omaha. Without being willing to walk away from the table, it's hard to convince the other side you mean business. I understand why some progressives are still demanding that congressional liberals leave the table if the Senate compromise is the only play possible.

I made this point throughout the summer, when liberals like Newsweek's Jon Alter, along with Matthews, were arguing that the left should surrender the public option immediately to ensure the passage of other healthcare reforms. As I said at the time, I don't know who taught those guys to play poker. If you give up on your ideals six months before the final vote, you can't expect to get much from last-minute negotiations.

I'm aware I'm violating my own rules by starting to publicly cast my lot with the backers of compromise. But I'm doing so to ensure there isn't a self-destructive rush to declare the bill wholly evil on the left. I have said it before: I'm disturbed by the stampede to abandon President Obama, and the Democratic Party, by people who sold Obama as the only progressive choice in 2008 -- people like my friends Tom Hayden and Arianna Huffington. Occasionally, I'm tempted, like the self-congratulatory folks who want to superimpose the divisions over the Iraq war, to do the same thing with the 2008 primary -- except Jane Hamsher and I were on the same side back then: on the side of staying neutral and not anointing one candidate the only progressive choice. And Taylor Marsh, who backed Clinton, opposes the likely compromise bill. So there are no simple, let alone simplistic, ways to think about this compromise.

I do believe that the lefties who bought or sold the idea that Obama was the only true progressive in '08 bear a special burden for the current disillusionment among Democrats. Obama mostly campaigned as a centrist Democrat; it was exciting (and a valid reason to prefer him) to have our first African-American nominee, but it wasn't the coming of social democracy in the U.S. I think people who sold Obama that way will be helping to dig progressives out of a ditch for years to come. It would have been great if both leading Democrats had to fight for progressive votes, but a lot of leading progressives bullied Clinton supporters and bowed to Obama prematurely.

But one person bears a much bigger burden for this confusion than Obama propagandists, and that's Obama himself. He's breaking two campaign promises by backing this bill: He (wrongly, in my opinion) opposed the individual mandate in 2008, while correctly backing the public option. Now he's selling out on both. The latest insult is the president telling the Washington Post on Tuesday: "I didn't campaign on the public option," when in fact it was a staple of  his policy papers and Web platform.  It's an astonishing statement. His supporters are right to chastise Obama. But I don't think defeating the likely compromise is a smart way to do it.

Obama's disappointing failure to push the public option aside, I think Democrats should back the bill. For one thing, the party has to start delivering on its promises.  I agree with Tom Harkin: The likely bill (there is still no actual bill) establishes healthcare as a right, not a privilege. It expands Medicaid to at least 17 million currently uninsured Americans, and grants subsidies to many millions, perhaps 10 million, more. It makes insurance companies pay out 80-85 percent of premium dollars on care. State exchanges may also be able to accomplish something close to a public option (although that is still not clear). And while the individual mandate (and accompanying fines) is of concern without a public option, Jonathan Cohn lays out how much families from 100 to 300 percent of the poverty line will be helped by the bill, and it's extraordinary. Finally, there is no universal healthcare without a universal, individual mandate. So the progressives who are trying to sell that as the lefty "compromise" are wrong.

So, yes, I expect I will support the compromise that emerges from the House-Senate conference committee. I hope House progressives get more concessions -- more and higher subsidies for working- and middle-class Americans, more incentives for insurance companies to compete and lower costs. But in the end, I'm with Harkin and socialist Sen. Bernie Sanders: This bill helps tens of millions of people. It moves us down the road to a genuine and legitimate public health infrastructure. It can also convince people on the fence that Democrats deliver on their promises.

But I won't participate in demonizing the bill's progressive opponents. We will need one another later on. I think the would-be so-called bill-killers are wrong -- but they're not evil, juvenile, self-destructive, solipsistic or any of the other epithets thrown around mainly by lifetime centrist Democratic apologists. They are the people who are trying to stake out a left-wing frontier to balance the likes of Lieberman, Nelson, Blanche Lincoln and Mary Landrieu, and all the Blue Dog Democrats in the House. The MSM -- and some offices in the White House -- still chuckle at the insurgent left, especially the netroots, as immature and impotent. That's a great way to encourage compromise, by the way. To the extent anyone who wants this bill to pass is still peddling this pernicious point of view, they might want to stop it.

Ultimately, I believe liberals aren't convincing when they threaten to pull a Lieberman and kill this bill, because everyone knows they care about people too much. It's a classic Solomonic choice: Put Medicare expansion or the public option in the bill, and Lieberman will kill it, because he killed his conscience long ago. Give Bernie Sanders $25 million in community healthcare clinics, as well as Medicaid or subsidies to get 20-plus million Americans healthcare -- even without a public option -- and Sanders is going to see the real human beings really helped by real healthcare. He's not going to hold out for ideological principle, and everybody knows that.

And, sure, it's hard to for liberal Democrats to negotiate with those who are making this all about ideology. But it's easier to sleep at night. This bill, if it passes, is not the end, but a beginning. I want it to pass, but I respect those who come down on the other side.