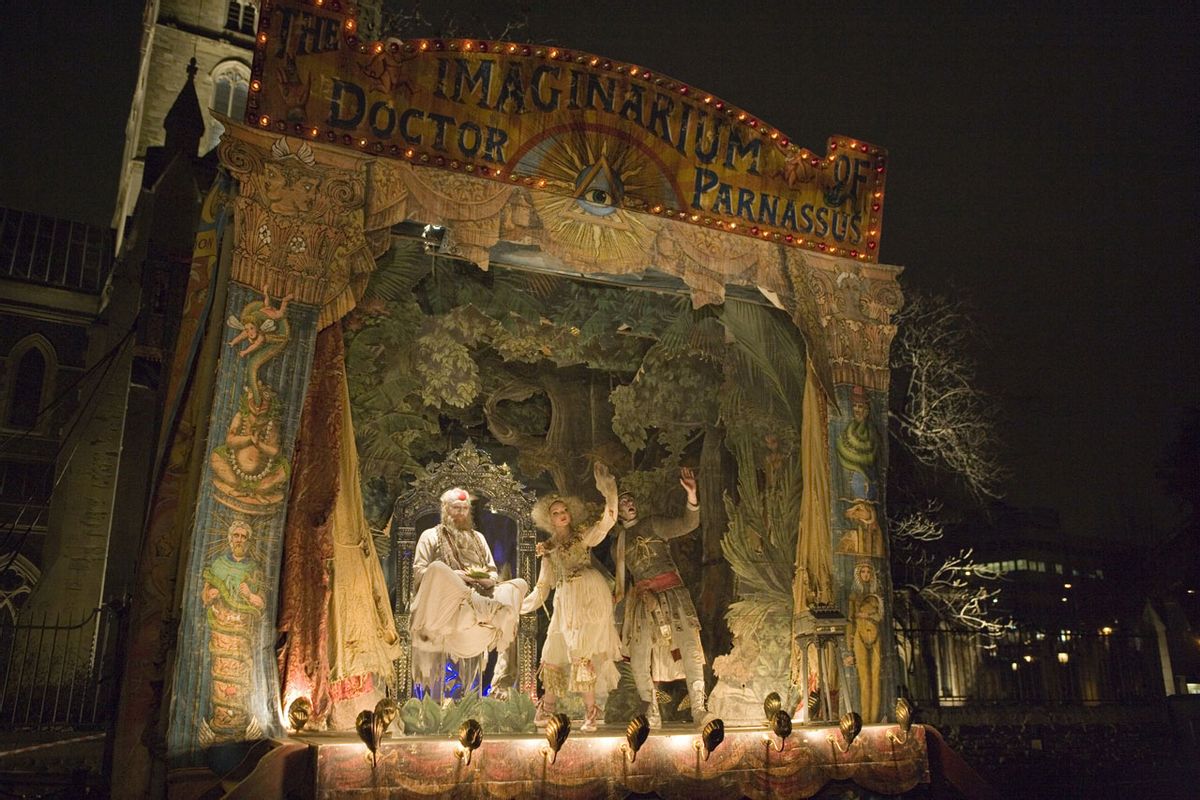 A still from "The Imaginarium of Dr. Parnassus"
--

In theory, Terry Gilliam stands for so many of the things people who love movies believe with all their hearts: Freewheeling geniuses should be free to make movies as they please, without being hampered by Hollywood bean counters. Visual inventiveness that doesn't cost half a billion dollars should be encouraged and rewarded. There's plenty of sane, safe stuff in movies these days -- filmmakers should take chances, they should be daring and wild.

But in practice, Terry Gilliam is too often simply exhausting. He has made some marvelous pictures -- among them the melancholy apocalyptic ballad "12 Monkeys" and the openhearted urban fable "The Fisher King" -- that are far from perfect, and yet whose flaws perhaps make them more compelling, rather than less; one thing that's never lacking in Gilliam's movies is the human touch.

But Gilliam often has too many ideas for one movie to comfortably hold; he throws them all in with no pruning or prudence. His two most recent pictures -- the 2005 "The Brothers Grimm" and the 2006 "Tideland" -- certainly have their champions among critics and moviegoers. But in recent years Gilliam too often seems to have been strangled by his own overgrown magic forest. Unfortunately, his latest, "The Imaginarium of Dr. Parnassus," is more of the same: It meanders and jaywalks according to its own confused rhythms, and the suggestion is that if we don't get it -- or if we get bored -- we're just not clued in to Gilliam's genius.

Christopher Plummer is Doctor Parnassus, a bearded curmudgeon who runs a traveling show with the help of a loyal assistant, Percy (Verne Troyer), a somewhat annoying but well-meaning performer named Anton (Andrew Garfield) and the doctor's 15-year-old daughter, Valentina (Lily Cole), who does in fact resemble a cherub on a Victorian valentine. The main attraction of Doctor Parnassus' show is a rather ordinary-looking magic mirror: On the other side is a strange dream world where an individual's deepest desires might be fulfilled, but it is also a place of tests and challenges through which a person's true character is revealed.

One evening, Valentina rescues a handsome rapscallion of a young man who appears to have been hanged from a bridge. His name is Tony (he's played by Heath Ledger), and he's adopted as part of the show. Before long Valentina begins to fall in love with Tony, which makes Anton -- who's been longing for her himself -- jealous. Meanwhile, it becomes clear that Doctor Parnassus has been harboring some secrets that might endanger his daughter's future happiness, connected with a bargain he once made with impish Mephistopheles stand-in Dr. Nick (Tom Waits).

The plot of "The Imaginarium of Dr. Parnassus" is intentionally higgledy-piggledy -- Gilliam, who wrote the script with Charles McKeown, is less interested in conventional storytelling than he is in concocting wild worlds that serve as dream landscapes in which characters are challenged to distinguish between truth and illusion, to choose between flimsy promises and choices that will truly bring happiness, to fight their own weaknesses in the face of temptation. Which all sounds great, except Gilliam allows all of those ideas to float a little too freely, visually and otherwise. The dream world on the other side of the mirror borrows from both pop art and surrealist painting; it's a place where corners aren't necessarily square and mountains look to be painted from memory, not from real life, a candy-toned landscape dotted with gazebos and fake Venetian bridges à la "Top Hat." Even wiggier, whenever Tony goes through Parnassus' mirror, he emerges on the other side as a different person, or, rather, as three different people, played by Johnny Depp, Jude Law and Colin Farrell.

That was Gilliam's clever solution to a problem he should never have had to face: Ledger died well before "Imaginarium" had been completed, and the three other actors stepped up, in a gentlemanly gesture, to try to fill the gap he left. The device might have worked, if only "Imaginarium" weren't so scrambled -- Depp, Law and Farrell barely make an impression; they seem to have been hustled into costume and makeup without any idea of what their characters are supposed to be. And the movie raises one new theme every five minutes, only to quickly drop it for another, and another. The problem isn't necessarily that the movie is disorganized and plotless; there can be meaning, or at least deep feeling, even in apparent chaos. But Gilliam doesn't take the time to flesh anything out. His ideas seem visionary, until you try to figure out what his actual vision is. The movie is intended as a puzzle -- we're not supposed to easily figure out what it means -- but too often the effect is one of disorganization masquerading as genius, perhaps more disingenuous than it is enchanting.

Gilliam is the poor little match girl of filmmaking: There's always some disaster that prevents his movies from being all they could be. It's true that some of the really big disasters he's faced aren't of his own making: The documentary "Lost in La Mancha" tells the story of how bad weather, injuries and other mishaps derailed his attempt to film a version of "Don Quixote." (A new version of the picture is now, apparently, in pre-production.) And no filmmaker deserves the bad luck of losing his star, as Gilliam lost Ledger.

But filmmaking is hard for all creative people these days. And it's gotten to the point where all of Gilliam's films come with an excuse attached: "It would have been so much better, if only ..." He always has the safety net of being the brilliant fuckup. Even without Ledger, the raw materials of "Imaginarium" might have come together beautifully. But the movie is merely a clever mess, and not even Ledger's limited presence can save it. His performance is mischievous and wily -- he gives Tony a scruffy, unwashed charm -- but he has very little time on-screen, for obvious reasons. It's impossible, and unfair, to judge the performance as a fully rounded vision, but the sad reality is that it's simply unsatisfying.

The best visuals in "Imaginarium" are the ones that are intentionally ramshackle: The Imaginarium itself is like an antique toy paper theater, bedecked with silver foil and rickety cardboard props -- it carries the spirit of all those great Monty Python collage animations. But most of the performances don't quite gel. Plummer pretty much squints and grunts through his role here -- he doesn't appear to be having much fun, or even to have given much thought to what he ought to be doing. The most appealing performer here is Lily Cole, who has previously worked as a fashion model. (She also appeared in Sally Potter's bitter fashion-world satire "Rage.") Cole gives a butterfly kiss of a performance -- she's all eyelashes and cupid's bow lips, and she's light on her feet, literally and figuratively, amid the archness of the movie around her. Gilliam does have a knack for putting interesting and unusual actresses in his movies, and finding good ways to show them off -- think of the wonderfully awkward Amanda Plummer (daughter of Christopher) in "The Fisher King," or the brilliant use of Uma Thurman as Venus on the half-shell in "The Adventures of Baron Munchausen." In "The Imaginarium of Doctor Parnassus," Cole is his great discovery, the real treasure in this cabinet of curiosities.