Guy Ritchie's version of the detective classic is hectic but harmless. Thank God for the film's two stars 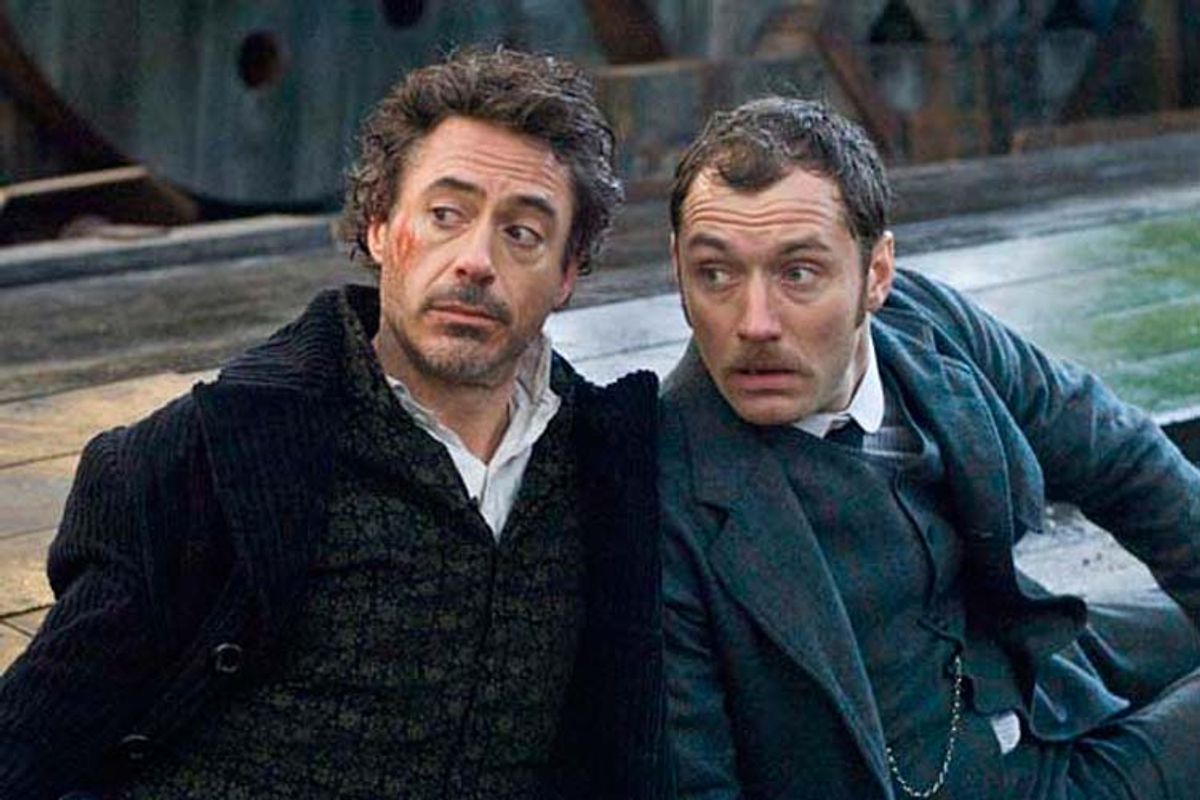 Guy Ritchie's "Sherlock Holmes" is entertaining in a glossy, mindless way — every corner of it is packed with hyperkinetic life, which is not to say that it's likely to stick in your memory for more than a few hours after you've seen it. The screenplay and story are credited to no fewer than five writers, and that's not even counting Sir Arthur Conan Doyle, who created the characters — and brought them to life with his elegant prose — in the first place. Ritchie seems to think that a detective-and-doctor team who solve crimes by, oh, thinking about them just isn't dynamic enough for the screen, so he turns Sherlock Holmes and Dr. John Watson — played by Robert Downey Jr. and Jude Law — into action heroes: They kick, punch and karate-chop their way through various scenarios in which the cutting is fast, even when the motion is slow, and the computer-generated effects are plentiful.

But much as Ritchie and his multiple screenwriters have cranked up, supercharged, and otherwise monkeyed with Doyle's original ideas, it's hard to get too bent out of shape about "Sherlock Holmes," partly because the actors seem to take so much pleasure in the act of giving us a crazy spectacle. The plot darts here, there and everywhere like a hepped-up cocaine fiend: Dr. Watson is engaged to be married to Mary Morstan (Kelly Reilly), a lovely, intelligent young woman who seems to genuinely care for him. Holmes is indifferent about the match: It's clear he feels a bit of jealousy at the idea of losing his dearest friend to marriage, which raises a meek specter of harmless, homoerotic frisson. But it's definitely a mini-frisson, because when Rachel McAdams' Irene Adler ("To Sherlock Holmes she is always the woman," writes Watson at the beginning of Doyle's "Scandal in Bohemia") drifts back into Holmes' world, he perks up considerably, to the point that he may be unaware of danger afoot. Adler may be involved with a group of black-magic baddies, the baddest of whom, Lord Blackwood, is played by a glowering Mark Strong. The serpentine plot also involves conniving politicians, the skeptical law-enforcement official Inspector Lestrade (Eddie Marsan), and a "ginger midget."

The story may be squirrelly, but it's at least worked out with some care. Some of the actors get a little lost in Ritchie's manic stew: McAdams, in particular, drops out of the movie's focus periodically, although she does look fetching in an assortment of bustles, picture hats and riding gear. The movie, shot by Philippe Rousselot, has a heavily antiqued, steampunky aura about it and features a suitable number of velvet curtains and dark alleys.

And both of the movie's two big stars hold their own surprisingly well in the midst of the movie's clutter. Law has the right amount of fidgety elegance: He plays Watson as a smart-enough fellow who nonetheless remains in awe of his dazzling friend — over and over again, he allows himself to be impressed by Holmes' ability to unravel a complex mystery by breaking it into a series of seemingly mundane but significant details.

Law makes a low-key, unassuming second banana to Downey's Holmes, maybe because he knows he could never compete. Who could? Downey is exciting to watch here, even though much of the movie around him is almost instantly inconsequential. Ritchie decides to dramatize Holmes' brilliant deductive skills by showing, in flashy, rapid cuts, how multiple bits and bobs of evidence fit together, helped along by an explanatory voice-over from Holmes. But really, all that excessive cleverness is unnecessary: It would be exciting just to watch Downey's Holmes think. Few other actors can show such a wide range of feelings — amusement, consternation, resentment or doubt — with little more than the twitch of an eyelid or a subtle shift in the set of a frown or a smile. Downey is the central cog in this movie's crazy watchworks. He takes a licking and keeps on ticking.