George Clooney's real performance of the year wasn't "Up in the Air." Plus: Jane Campion, "Star Trek" and madness! 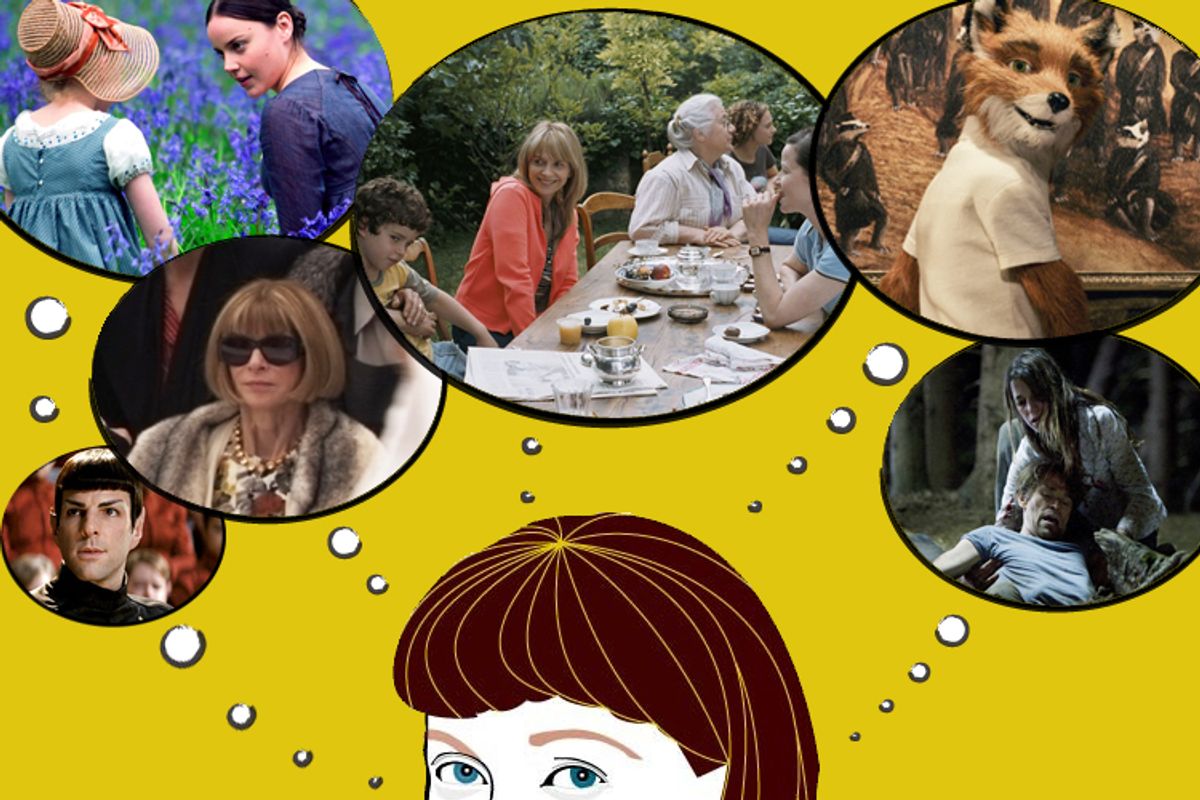 A month or so ago, as critics' top-10 lists started trickling onto various Oscar-related blogs, I noticed that one list or another would be branded "idiosyncratic," and I started to wonder exactly what that meant. Is there a hypothetically perfect list, a list that follows some ideal template? Is the ideal list the one that's most in tune with the Zeitgeist? One that doesn't contain any foreign-language or otherwise "weird" films that the majority of the American populace hasn't seen? Considering that 2009 saw the theatrical release of some 600 movies — not that any critic comes close to seeing them all — isn't any list made by any individual human being going to be idiosyncratic in some way? The notion that there's an acceptable critical view, that certain movies must — or must not — appear on a list in order for any given critic to be taken seriously, flies in the face of what criticism is supposed to be.

The year that's just passed was a great one for movies, but perhaps not necessarily for mainstream blockbusters that whole clusters of critics automatically got behind. "Up in the Air" and "Up," both generally well-reviewed, are clearly favorites among many critics; "Avatar" may have made it onto some lists as well, although many critics had filed their lists by the time they were able to see it. But that still leaves dozens — no, hundreds — of odds and ends, smaller movies that any critic or moviegoer may or may not have seen. And unless you live in a major metropolitan area with a good independent movie theater, those movies probably won't reach you until they come out on DVD. Heck, even if you live in New York City, they may have barely reached you: One movie on my list played in New York for just a week, although thankfully, it can be seen on DVD.

The harsh reality is that theatrical-distribution problems for independent films are only going to increase. Most people will see these smaller pictures at home, although the silver lining to this particular cloud is that at least those movies can be seen, pretty much anywhere. And so I invite you to draw up your own list of favorite movies of 2009, whether you watched them in a theater or at home, with reckless disregard for what anyone thinks you should like. In other words, feel free to be idiosyncratic.

Here are my 10 favorites which, beyond the top three, are not necessarily in any particular order:

"Summer Hours" — Olivier Assayas has made a lyrical, bittersweet picture about preserving the past by letting go of it. Juliette Binoche gives a wonderful, slightly prickly performance as one of a group of siblings who can't agree on how their mother's estate should be divided. (Edith Scob, who as a young woman starred in Georges Franju's "Eyes Without a Face," plays the matriarch, superbly.)

"Fantastic Mr. Fox" — No movie gave me more pleasure this year than Wes Anderson's stop-motion adaptation of Roald Dahl's marvelously disreputable children's novel, a picture made with so much care and love that it practically glows. And this is the Clooney performance of the year: His elegance and charm find a natural home in the body of a handsome, wily fox puppet.

"Antichrist" — Hell hath frozen over: A Lars von Trier movie has found its way onto my list. I've always found von Trier's movies pretentious and misanthropic in a self-aggrandizing way, as if he were looking down on his audience and pronouncing them unworthy as human beings. But "Antichrist," in which Charlotte Gainsbourg gives an astonishing performance as a grief-stricken wife and mother creeping toward madness, is different. There's more raw pain in this picture than most filmmakers would dare, or be able, to express in a single work. "Antichrist" isn't easy to love, but I can't look away from it: This is the movie in which von Trier reaches out to us, instead of just looking down.

"The September Issue" and "Valentino: The Last Emperor" — These two beautifully made documentaries — by, respectively, R.J. Cutler and journalist turned filmmaker Matt Tyrnauer — are ostensibly about fashion. But really, they're both about the nature of work and of partnership, as well as the value of manmade beauty and craftsmanship in our world. In "The September Issue," Vogue editor Anna Wintour and creative director Grace Coddington channel two very different, often conflicting visions into the pages of their magazine — the chemistry works in spite of itself. And "Valentino" shows us the Designer Who Needs Only One Name and his movie-star-handsome partner (in both business and life), Giancarlo Giammetti, residing over a dying butterfly of a world, the planet of haute couture.

"Coraline" — Henry Selick's stop-motion animated picture, adapted from Neil Gaiman's creepy-wonderful kids' book, is visually inventive and gloriously tactile. In a movie universe where the human touch is becoming a thing of the past, Selick champions the beauty of visible fingerprints.

"The International" — German director Tom Tykwer makes a smart, quiet, gorgeous-looking thriller for grown-ups, and — surprise! — it tanks at the box office. The cutting here is meticulous but leisurely; the mood is one of restless melancholy. Although Tykwer's craftsmanship deserves to be seen on the big screen, it at least deserves a second chance on the small one.

"Lake Tahoe" — In 2006 the young Mexican filmmaker Fernando Eimbcke gave us the strange and lovely coming-of-age tale (shot in black-and-white, no less) "Duck Season." Eimbcke's most recent picture, "Lake Tahoe," earned accolades at various film festivals, but was barely released in the United States. (It played for one week in New York.) The movie covers a day in the life of a young man who's just suffered a death in the family, and it's the kind of picture in which nothing, and yet everything, happens. Eimbcke's style of filmmaking is disciplined, serene and ultimately deeply moving, and he knows the value of keeping the camera still. Shaky-cam haters unite! ("Lake Tahoe" is available through Film Movement.)

"Broken Embraces" — Pedro Almodóvar's latest, a gorgeous melodramatic fantasy about what it means to live for movies, has the go-for-broke passion and lush craziness of early Almodóvar pictures like "Matador" and "Law of Desire." And he always brings out the best in Penélope Cruz: Here, she's a dazzling, vital beauty who shows how exhausting it is to be a full-time dream girl.

"Star Trek" — Mainstream sci-fi filmmaking, done with heart and intelligence, courtesy of J.J. Abrams. Leonard Nimoy and Zachary Quinto, as the older and younger versions of Spock, are the tag team of the year.

Check in tomorrow for Stephanie Zacharek's picks for best movie of the decade.