Beef, pork and love, but most of all love

A woman's trip back to her family farm, for cousins, cookies and steaming carcasses 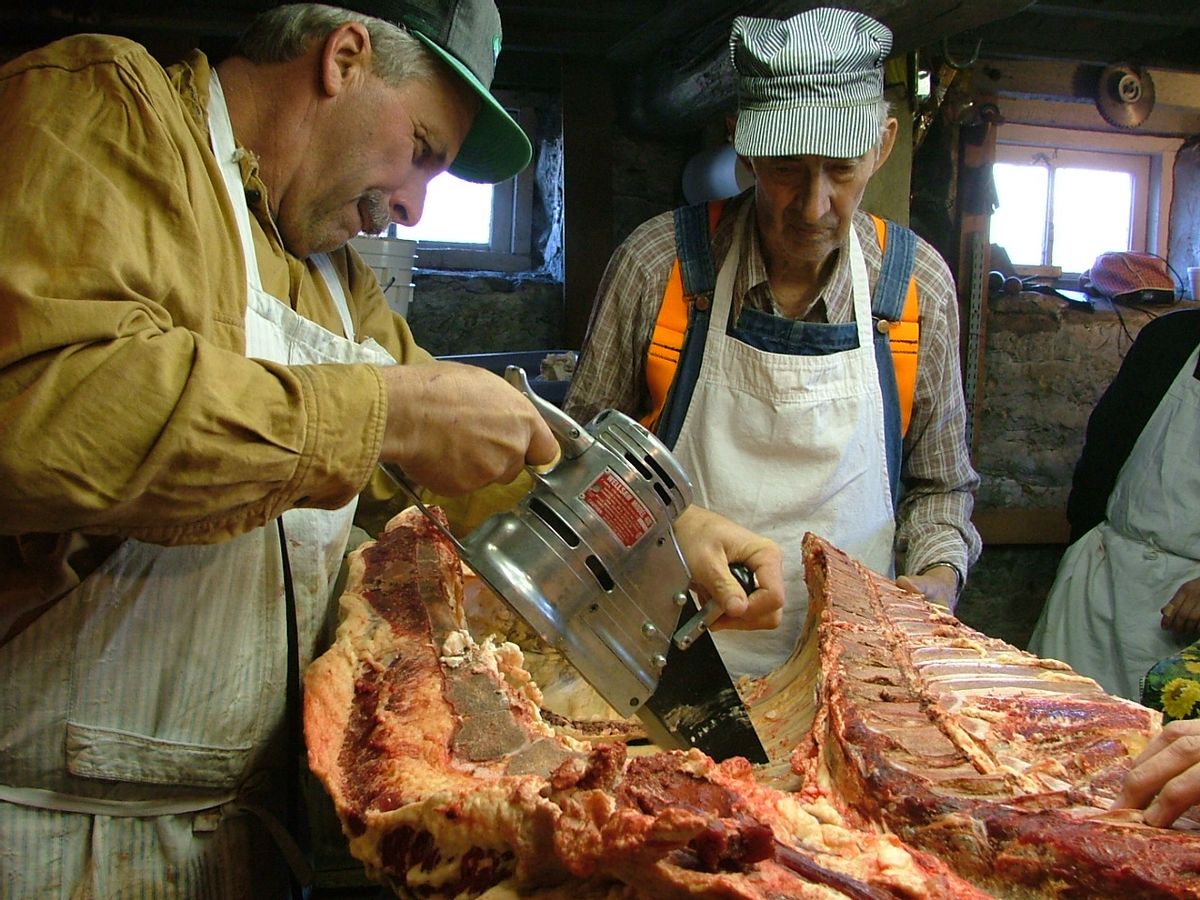 For years, my friend Kristen has been telling me about her family's tradition of butchering in the winter. Since I moved away from her, she's finally even invited me to come — for a day. I still haven't had a chance to visit, and this is what I'm missing.

My sister, a vegetarian of 13 years, walked into the garage. She held a knife; we're adults now, and they need us to do this. The pig was on its back in a trough, its legs tucked up high, pink and rounded. We butcher in the winter to preserve the meat, but that means the animals, dead all of five minutes, steam copiously into the December air. "My dog lays like that sometimes," she muttered to me, readjusting her grip on the knife. Deep breath.

Christmas is important, but Butchering, that four-day event directly after, is sacred. This is not an unusual thing where I'm from in rural Pennsylvania, although it seems families scale back more and more over the years. We definitely have: We no longer make lard; we don't save and scrape out the intestines for sausage, buying premade casings instead; we don't boil down the bones to make scrapple, that delightfully Dutchy, suspicious meat by-product. Family tradition is important, but it only goes so far when dealing with us practical Pennsylvania Germans. We buy our chicken at the store now, like most other Americans.

But the cow and the three pigs, whichever makes it out of the stall first, these are the constant, even more essential than the overabundance of dessert and the annual scuffle over how much coriander to put in the sausage. Five days straight of family members coming and going from my grandparents' crooked log-cabin farmhouse, of endless piles of dishes to be washed, of grabbing handfuls of cookies with hands only perfunctorily wiped on greasy, hand-stitched aprons. It's the time to spend time with cousins, aunts and uncles seen too rarely; a special holiday disguised as everyday life. The point is that we get a yearful of meat out of it, even as it is beside the point.

I've never made it out to the barnyard early on Killing Day: I've tried twice now, and each time get out there to meet my uncle and a cousin-in-law or two. They pick up their guns, and I say, "Um ... I'll just meet you in the garage for the skinning." Maybe next year.

I haven't quite figured out why I want be in that barnyard, rather than contenting myself with the meat wrapping like the other girls. Partially it's because my uncle, the last farmer in the family, is getting older and no one in my generation is stepping up to the plate; partially it's because I feel this is a rare opportunity to really see where my food comes from, from start to finish. Part of it is the individualism that's been bred into me, a stubborn Pennsylvania Dutch self-reliance as ingrained as my polite-yet-distant approach to strangers, my repressed Protestantism. There's a certain allure in saying, with certainty, "Yes, in case of the apocalypse, I can feed myself."

It's more than that, too. I take joy in pulling a white lumpy package of family-farm meat out of the freezer, the same way I take joy in the scarf my sister knit me, the journal I hand-bound. It's about creating something I can use, with my own hands, and finding meaning in the process. In this way, butchering is another form of craftsmanship, just ... bloody.

Back in the garage, we start at the hooves, slicing a shallow ring around the first knuckle and then drawing a line down the back of the leg toward the rump. The first time I skinned a cow, slicing and peeling, I overcame my kneejerk revulsion to delight in thinking, so this is why leather feels the way it does. There are five of us, one on each limb, with my uncle tending to the head. We haul the animal up by its back legs with a winch, finish skinning, and then stand around and munch freshly baked cookies while my uncle eviscerates it. It's family bonding time.

I went through a period where I was embarrassed to mention that my family butchers its own meat, knowing it marked me as the country girl I am, thinking civilized society would be shocked at an educated girl being part of so base a process. But in the past few years, after moving out and discovering what I'd left behind, I decided that the people who are shocked don't have any business picking up those Saran-wrapped Styrofoam trays of beef at the grocery store. This is the reality of eating meat: The animal has to be killed and butchered. If we can do it ourselves, have control over the process, all the better -- especially if we can make some traditions along the way.

The traditions pile up alongside the freezer packs. As steak-cutting and hamburger-grinding happens in the basement, there is an equal contingent of wrappers directly upstairs in the kitchen. We divvy up the pans of pork chops and hamburger into three- or four-person servings, passing them around to be swaddled in white freezer paper. The younger kids rip masking tape, and the youngest draw and learn to write on the packages. We mark the year, the family it's for, and what's inside. Often, someone gets forgetful while wrapping, so it's not unusual to find later that year a lumpy package in the freezer that just says, "BEEF SURPRISE."

The first of my generation to get married, my cousin Amanda, got a special treat her first Butchering as a newlywed. My aunts wrote recipes in Sharpie on the backs of the wrapping paper. On a package of round steak came a list of vegetables for beef stew; on a pack of hamburger, the recipe for stroganoff. We write notes to each other, to be found months from now: "Hi Aunt Linda!" or "LARGE T-bone, for when Susan and Ben are visiting!" Every time I pull a pack of sausage out of my freezer and recognize my aunt Debbie's handwriting, it's a reminder of who we are for each other.

"Well ... what do you think?" Uncle Dennis asked, rotating a large hunk of cow and squinting in concentration.

Last year, Dennis, my godfather, lent me his copy of "Basic Butchering of Livestock and Game," because I was so interested the year before. I called myself his apprentice, helped him haul sides of pork and decide where to cut the T-bones. I had no idea what I was doing, and Dennis, for all the times he'd done this, was not an expert. Once a year is not often enough to learn as involved a trade as butchering, and he has his crops and his livestock always on his mind. Aunt Debbie, Dennis' wife, confided that the night before Killing Day, Dennis stayed up late at the kitchen table, poring over the diagrams, trying to memorize where to slip the knife, reminding himself how to avoid nicking the intestines.

We wound up with odd-looking hunks and tried to come up with purposes for them. My mother, checking in on us, said laughing, "Cows don't actually have those dotted lines, do they?" When in doubt, we passed bits onward to the small army of aunts, uncles and cousins cutting these parts into chunks for grinding. What we could, we ran through a bandsaw, flecks of pink tallow spitting out. It is all unglamorous, perplexing, and makes me love my uncle even more than I already do. He steps up to do this vague thing because we need him to.

The book made even gutting seem dull, full of phrases like, "Carefully tie off the bung." More interesting to me were the notes my uncle scrawled, trying to refresh his knowledge from 360 days ago and the varying sausage-recipe cards that fell out as I flipped through. This year we tried maple sausage in addition to the standard batch; one year we tried filling the rusty metal smokehouse with hickory wood. We fry up a few test patties when we think we have the sausage mixed properly, pass around bites, and uncles chew thoughtfully before commenting, "Could use more black pepper." That first bite of sausage, hardly three days out of the animal, is my favorite bite of meat the whole year through, astoundingly fresh and flavorful, familiar spices tasting like childhood Sunday mornings. I am not much of a meat connoisseur, but that bit of fresh sausage alone is enough to keep me from vegetarianism.

I carefully replaced the recipe cards and returned the book, completely overwhelmed at how much knowledge goes into a hamburger. Knowing I will ask to borrow the book again in another 11 months, just as Dennis will pull it back out.

I don't know who will take over butchering in my own generation. That it might die off is unthinkable, which is why I keep thinking I need to step up. Without a real farmer, though, we would have to buy the animals from someone else, and small family-owned farms are increasingly rare.

I keep toying with the idea of apprenticing on the farm with my uncle, because while I know how difficult living off the land is, I know I don't truly understand it. But I'm conflicted about being the one to actually make that life choice. My family and the farm are precious to me, even as I live 1,200 miles away from them, and Butchering is the most productive of family reunions. But there are so many things I want to do in my life, and even if learning how to butcher is one of them, I don't think I'm ready to give up the rest. I juggle what I have made for myself, my work and my education, with my birthright. I am caught between the progression of time and the static halt to it that tradition brings, and I don't know how to see my way out.

I am rarely on the family farm, growing in the larger world outside our valley, but when I am home, I am ruled by tradition. I submit joyfully. I want to grow older with my cousins always gathering the way we have, with their children learning to write on the stacks of white-wrapped meat, with cows always in the barn and snow on the sledding hill, with always more dessert than we can possibly eat. I go away for the rest of the year, but I want to always come back this one week, for this one sacred act, to replenish our freezers and bond over the dishwashing. And I want always to come across a happy note from a cousin jotted on a steak in the back of my freezer and laugh delightedly in the heat of July, reminded of the tether that holds me to that valley, oddly thankful it takes the form of meat.