The secret lives of brokers and lawyers 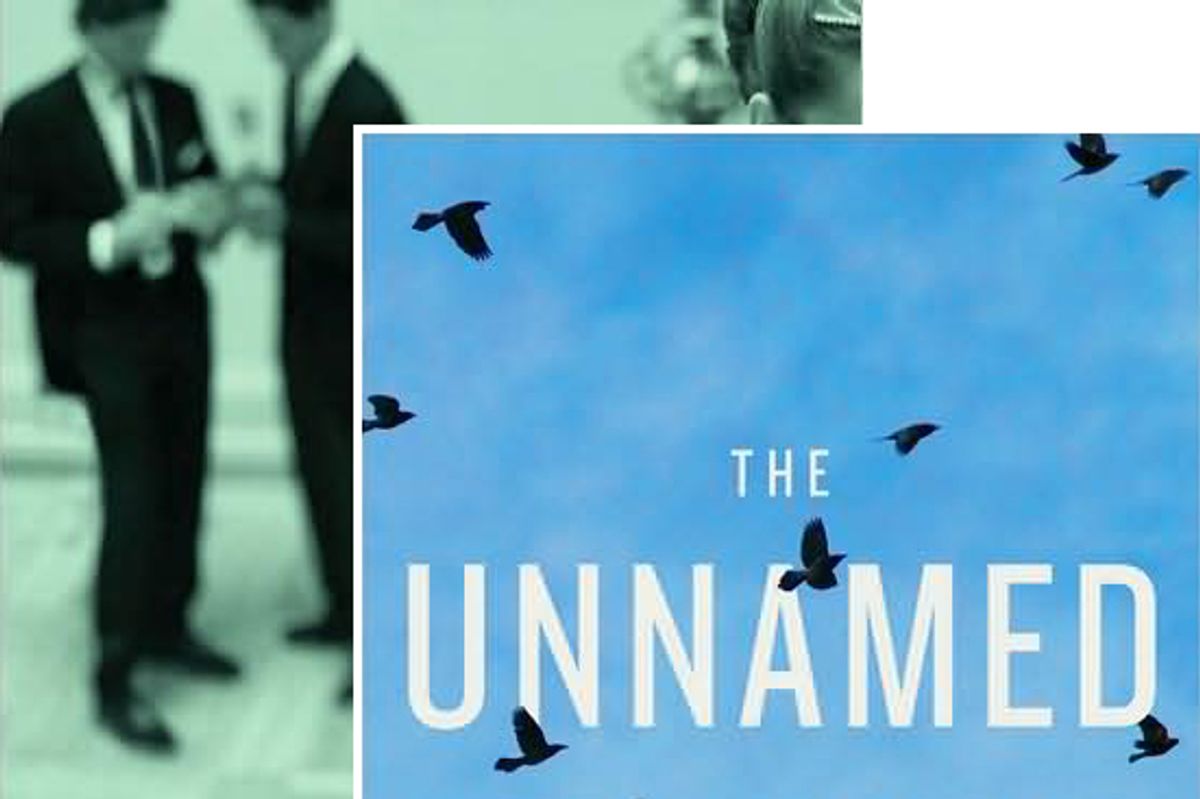 What are the limits of the will, and of the great American enterprise of self-creation? Two new novels — "The Privileges" by Jonathan Dee and "The Unnamed" by Joshua Ferris — take that question as their theme, and affluent married couples in contemporary New York as their subjects. Although this column is supposed to spotlight just one book per week to recommend to Salon's readers, now, only a couple of installments in, my own grand plan has hit a snag: "The Privileges" and "The Unnamed," while very different, are equally captivating.

Dee's novel follows the marriage of Cynthia and Adam Morey, beginning with a bravura wedding-day set-piece in which the third-person narration ricochets from one character to another — the wedding planner, the groom's awkward little brother, the bride's glowering hipster stepsister, etc. — like the restless camera in a Scorsese nightclub scene. The author has set himself a singular challenge: Adam (a stockbroker) and Cynthia are, as Adam's brother puts it, "masters of the universe," yet Dee wants to depict the couple sympathetically, disarming the knee-jerk mixture of resentment and condescension usually reserved for those we dislike out of envy or righteous indignation.

The newlyweds are neither stupid nor venal. They're smart, clever and good-looking, and despite a troubled upbringing, each has found in the other a fail-safe ally in the campaign to remake themselves from scratch. Their marriage is invincible, a juggernaut cannoning forward into the future, undeterred by regrets, doubts, hesitations or divided loyalties. In the 30-year course of "The Privileges" they will become stupendously, fantastically rich.

"The Unnamed" is Ferris' second novel (after his much-celebrated debut, "Then We Came to the End," set in a Chicago ad agency during the 2001 recession). It describes the Job-like sufferings of Tim Farnsworth, a partner in a high-end Manhattan law firm who is suddenly stricken with a bizarre ailment: the unpredictable and irresistible compulsion to walk great distances until he collapses in exhaustion. The book opens with the second recurrence of this malady, and by now Tim's realtor wife, Jane, has figured out how to prepare for his involuntary treks, equipping him with winter clothes and a backpack filled with energy bars and first-aid supplies. Still, Jane's resolve buckles when she is faced with the resumption of phone calls at all hours, summoning her to collect her disoriented or sleeping husband from fields and parking lots, park benches in Newark, and the back rooms of Bronx beauty parlors.

Both of these novels focus on people of approximately the same social class (the Moreys start out as the sort who'd have dinner with the Farnsworths, but wind up as the sort who'd hire them), and both explore the submerged anxieties of the conventionally successful. But where Ferris tests his characters by ushering them into a realm of fablelike affliction, Dee prefers the waspish scrutiny of satire. He describes a discomfited woman as laughing "as if she were being filmed laughing," and a high-end hospice center, staffed by "drably luminous avatars of selflessness," as decorated by a small lake that's "plainly man-made and perfunctory-seeming, a kind of trope of serenity." The influence of Jonathan Franzen's "Corrections" can be felt on every page of "The Privileges," but unlike Franzen's feckless and self-deluding Lambert clan, the Moreys are without obvious frailties, an invulnerability that itself, in time, becomes a flaw.

Adam and Cynthia don't meet with any expected comeuppance. They don't cheat on each other, don't abuse substances or wallow in grotesque self-indulgence. Adam manages to start and then extricate himself from an illegal and highly lucrative insider-trading operation without suffering any repercussions, but then Cynthia compensates by funneling a goodly chunk of their wealth into a vast charitable foundation. So triumphant is their union that it seems to stunt the people around them — most notably their children, April and Jonas — who are cast into the roles of attendants, supplicants and admirers.

April becomes a clubbing socialite who can't seem to help "hanging out with the same stupid people doing the same stupid shit even though I don't really want to ... I mean, what am I supposed to do with my time?" Jonas makes a fanatical pursuit of authenticity; he's the kind of kid who for Christmas asks for "all twelve volumes of the Alan Lomax Library of Congress recordings, on vinyl" and shacks up with his grad student girlfriend in much shabbier circumstances than he can afford. His efforts to renounce the privileges bestowed on him by his parents, like April's attempts to drown in them, lead to disaster.

"The Privileges" is shrewdly realistic, even a bit gossipy; "The Unnamed" is the artier of the two novels, unfolding in a hushed, shadowed dimension located somewhere between myth and a David Mamet play. Readers of "Then We Came to the End" will find less humor in this book, although Tim's efforts to cling to his job while in the throes of his disorder do allow for some of the barbed office politics that made "Then We Came to the End" so invigorating. Nevertheless, Tim's battle against his condition proceeds as a relentless stripping of ephemera, a return to the primal and the eternal, and as the novel goes along, everything specific, everything of the moment, falls away.

The temptation to equate Tim's illness with something more familiar is inevitable: It could symbolize any addiction or compulsion or, just as easily, illness itself. Much of what he and his family endure — the endless rounds of consultations with doctors, the hopes raised and crushed, the rage and defiance in the afflicted, the soul-searching of the caretakers, the friends and colleagues whose sympathy fades to neglect as they get on with their lives, the glimpses of transcendence in ordinary experience — is experienced by most everyone hit by a serious, chronic disease. Yet what's wrong with Tim has no discernible cause; it is unnamed and his alone, making it even harder to bear.

I suspect Ferris would resist any simple correspondence between Tim's disorder and, say, cancer or alcoholism. Tim is at war with his body, a situation which is, after all and eventually, common to every human being. His work, his passion for Jane, his clumsy love for their daughter, his will and his own name, his very identity — all of these are the weapons he marshals in that war. Yet even life's winners are destined to lose in the end; the only real redemption lies in the grace with which we meet our defeat. No one ever gets to master the universe.

Books Family Fiction Our Picks What To Read