Can't our government get anything right?

Whichever party's in charge fumbles the basics -- security, health, infrastructure. Why are we paying these people? 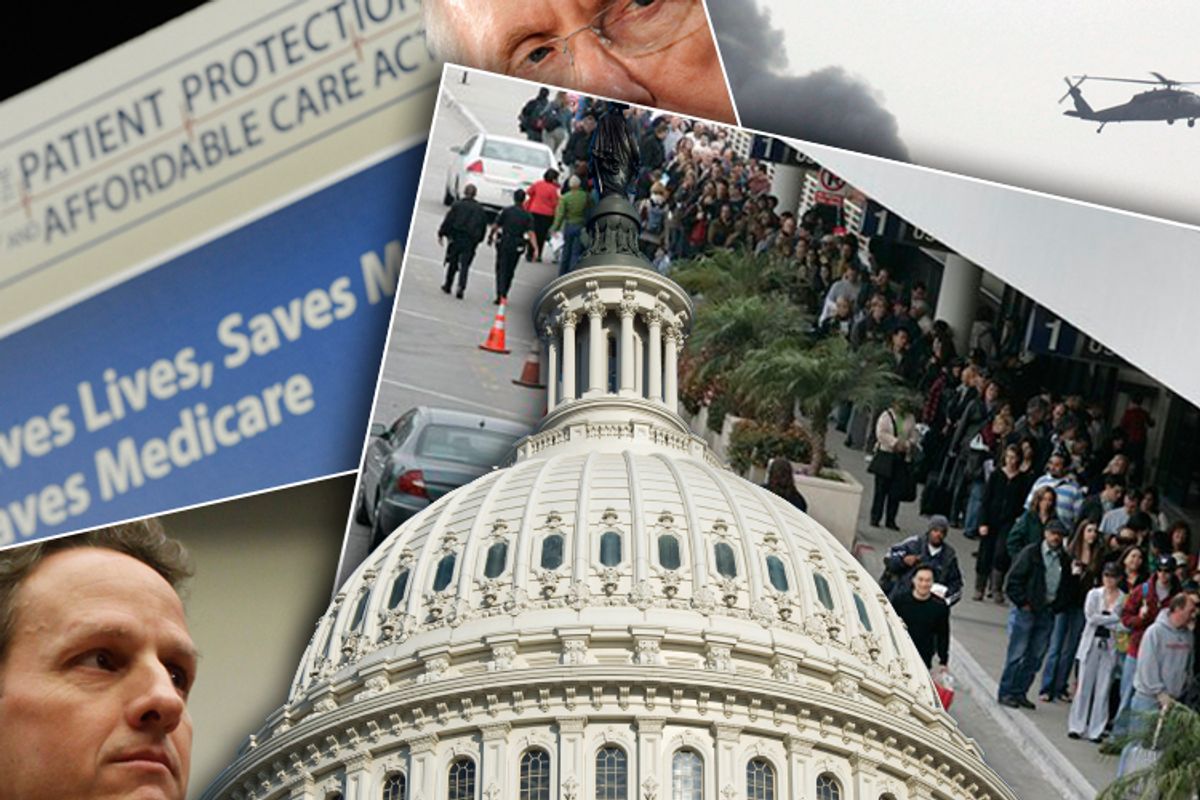 I have a confession to make. I have been suffering from painful flashbacks lately. Memories of the 1970s force themselves, unbidden, into my mind. Memories of the high school assembly where we students were handed WIN (Whip Inflation Now) buttons.

Grownups who were unable or unwilling to take the policy measures necessary to reduce inflation told us children that price inflation was our personal responsibility, just as similar cowards and charlatans today tell us that addressing global warming is a moral responsibility of ordinary people, not a technological issue to be resolved by governments and utilities. I remember the U.S. retreat under fire from Indochina under President Gerald Ford and the debacle of the Desert One mission to rescue the American hostages in Iran under President Jimmy Carter.

And then there is the most painful memory of all: the killer rabbit. On April 20, 1979, a White House photographer captured an image of the beleaguered President Carter using his paddle to fend off a rabbit as it swam toward his fishing boat in Georgia. The photo was suppressed until the Reagan years, and Carter's press secretary explained that the creature was a ferocious "swamp rabbit." But headlines like "President Attacked by Rabbit" gave a comic spin to the widely shared feeling that the U.S. government had become feeble and ridiculous.

I've got those killer-rabbit blues again. And I'm not the only one.

Some Democratic partisans have claimed that the pathetic, lobby-written healthcare bill is the greatest expansion of social insurance in the U.S. since Medicare. Possibly true, but so what? Passing the greatest social reform since the days of LBJ is easy, like being the greatest novelist in Lichtenstein or the greatest tap dancer in Mongolia. There isn't much competition. Since the 1960s our increasingly paralyzed Congress seems to have become incapable of enacting any reform that isn't trivial, or botched, like the creation of the Department of Homeland Security, or corrupted beyond recognition, like the healthcare bill.

Nor is the pathology limited to the legislative branch. Whether under Republicans or Democrats, whether the threat is Hurricane Katrina or Umar Farouk Abdulmuttalab, America seems to be facing a general crisis of state incapacity. Money can be found by Democratic and Republican administrations alike to bail out campaign contributors on Wall Street, but not to repair our crumbling infrastructure.

The U.S. fought and won World War II in less time than it took to adequately protect U.S. soldiers against primitive weapons in Iraq. We are told that we have to stay in Iraq and Afghanistan indefinitely, because withdrawing would be admitting failure. Translation: We haven't won and are unlikely to win in the foreseeable future, if ever.

And now the narrowly averted Christmas massacre in the skies above Detroit. I don't think I'm overreacting when I say that if ever overreaction on the part of a citizenry has been justified, it is now. We the people deserve to be angry. It's not as though Abdulmutallab came up with a clever new tactic while our national security agencies were focused on the last tactic. He used more or less the same tactic as the "shoe bomber," Richard Reid, and nevertheless got through every layer of international and national security.

It's almost as though Osama bin Laden had been allowed through screening at Boston Logan, used a box cutter to hijack a jet, and would have crashed it but for the heroic intervention of other passengers defending themselves after their government failed to defend them.

Forget Democrats and Republicans for a minute. Every American should be asking the same questions: Why are we paying these people?

Our elected leaders and public servants can't do the hard stuff, and they can't do the easy stuff either. They can't provide universal, affordable healthcare, of the kind that all other advanced industrial societies have. They can't give us a system of banking that channels money from depositors to productive enterprises in our country, without being channeled into gambling with obscene profits skimmed off for the gambler-bankers. They can't win wars or avoid unwinnable ones. They can't even repair bridges and keep levees in operating condition, tasks mastered by the relatively primitive ancient Romans and ancient Chinese.

And now, after two invasions justified in the name of the "war on terror," the creation of a cumbersome Homeland Security bureaucracy and a Patriot Act, and countless studies, reports and hearings, it turns out that we Americans may have to defend ourselves against jihadists. First we were told ad nauseam that it was our job to identify possible terrorists in airports and bus terminals and train stations. What next? "Passengers are advised to be prepared to throw themselves if necessary on the flaming traveler next to them in the aircraft, in order to prevent a bomb from detonating. Please watch the demonstration by the flight attendants."

The reality as well as the perception of government incapacity threatens liberalism more than conservatism. After all, if public safety deteriorates, antisocial plutocrats can retreat into doormanned buildings and gated communities and hire their own private security forces, and rural conservatives can amass home arsenals. And if the costs of personal security reduce the room for taxes for public goods, well, then, so much the better, from the perspective of certain strains of anti-government conservatism.

In contrast, America's modest and inadequate system of social democracy rests on economic growth made possible by effective government provision of basic public goods. Economic growth in turn rests on physical security — the protection of citizens against criminals in their midst and hostile or law-breaking foreigners. Libertarians to the contrary, the indispensable preconditions for the free society are effective armed forces and police forces, be they citizen militias or professionals.

Social democracy, in the form both of middle-class social insurance like Social Security and Medicare and means-tested programs for the poor, is a luxury of countries with secure borders and advanced, functioning mixed economies. You can have a generous welfare state only after you have effective soldiers, police forces and intelligence agencies and well-run industries, infrastructure and utilities.

If global war or a civilization-threatening natural catastrophe forced us to choose to save some functions of government at the expense of others, we would put security over wealth and redistribution. We would sacrifice the Social Security Administration and the Commerce Department in order to keep the Pentagon, in the hope of regenerating the fleshy tissue of the economy and the social insurance system in the future around the hard skeleton of the state.

Twentieth-century progressives and liberals took this order of priorities for granted. Theodore Roosevelt the environmentalist and reformer was also police commissioner of New York as well as assistant secretary of the Navy and commander of the Rough Riders. Franklin Roosevelt had a major in navalism and power politics, as it were, and a minor in electrical utilities. FDR came relatively late to the idea of social insurance. Any list of Americans who symbolized New Deal liberalism in the public mind would include Adm. Hyman Rickover of the Navy and the Atomic Energy Commission and David Lilienthal of the Tennessee Valley Authority.

Following the Vietnam War, however, the two parties specialized, with the Republicans specializing in national security and "law and order" and the Democrats specializing in defending existing social insurance programs like Social Security and Medicare and proposing new ones like universal healthcare. Because security against foreign attack and domestic crime comes first, even in the left-liberal tradition, properly understood, it is hardly surprising that Republicans have dominated the presidency except in the 1990s, when the Cold War had ended, and beginning in 2008, when the fear of al-Qaida-inspired jihadism had gone down (perhaps temporarily).

This doesn't mean that progressives should try to prove they are as tough as conservatives by invading countries unnecessarily, or keeping Guantánamo open, or torturing terrorists, or supporting the barbaric death penalty. Nor do they need to adopt neoconservative rhetoric or strategy. But it does mean that the party of activist government is doomed unless it is first and foremost the party of functioning, competent, basic government — national defense, law enforcement and functioning public utilities, including utility banking.

Not all Democrats are progressive, but in our two-party system, the Democrats are the more progressive party. At the moment the relatively progressive party owns the national government, and the national government's first job is to control its own borders, keeping out enemies like Abdulmutallab. National defense requires striving to eliminate illegal immigration and punishing those who break our immigration laws because the same lax law enforcement that permits the "good" illegal immigrant nanny to cross the border and the "good" foreign student to overstay her visa inevitably empowers terrorists and criminals.

Democrats shouldn't see this as an irksome task that is necessary to win the credibility they need for their social insurance reforms. Like the progressives and New Dealers, they should take it for granted. Physical security comes before economic security.

It wasn't my personal duty back in the '70s when I was a high school student to "whip inflation," and it is not my personal duty now to be vigilant in the airport or to be prepared on airplane flights to overpower a would-be mass murderer on a terrorist watch list who has brought easily detected explosives onto the plane. We hire politicians and pay public servants to do these tasks — not to try their best to do them, not to come up with procedures to make it likely they will be done, but to actually do them.

If our officials can't provide the basic goods of an advanced society — secure borders, safe streets, a functioning economic infrastructure — then we need to keep firing them until we find somebody who can do the job.