Directors of the decade: No. 3: The Coen brothers 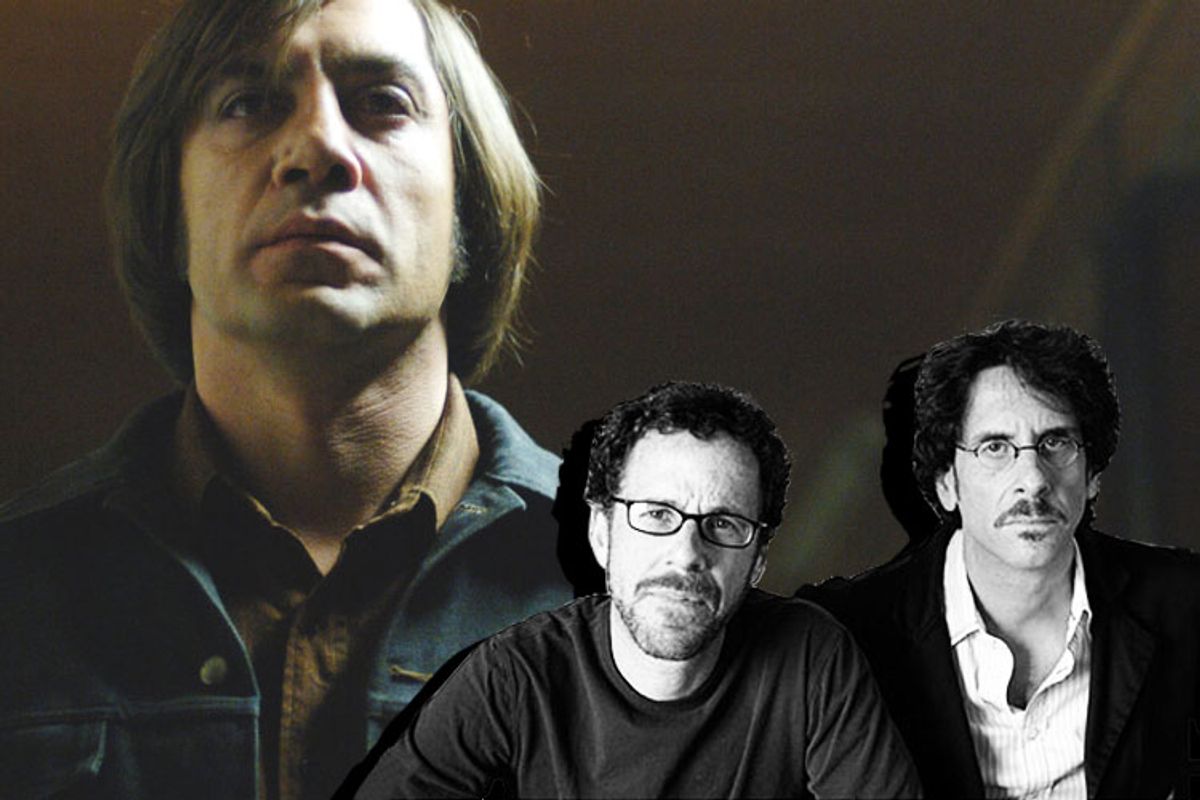 Looking back over Joel and Ethan Coen's run of work this decade — an output that produced such hits, conversation pieces and headscratchers as "O Brother, Where Art Thou?" "The Man Who Wasn't There," "The Ladykillers," "Intolerable Cruelty," "No Country for Old Men," "Burn After Reading" and "A Serious Man" — I'm struck not just by its diversity, ambition and sense of craft but by its sincere engagement with the most basic and important struggles in life.

This may seem an odd claim considering how reflexively the Coens are diminished, even in positive reviews, as brilliant pranksters — snickering film geeks churning out high-grade pastiches so gripping and tactically opaque that some moviegoers mistake them for art. But if one sets aside the received wisdom about the Coens — which, 25 years after their debut feature, "Blood Simple," and two years after their multiple-Oscar-winning "No Country for Old Men," still clings to their filmography like the dye that stained dunderheaded bank robbers Gale and Evelle Snoats in "Raising Arizona" — I think their work bears out the assertion.

Luis Buñuel, Stanley Kubrick and Robert Altman were likewise described as loftily detached, misanthropic, cynical — and I don't think the complaints had merit in their cases, either. Like Buñuel, Kubrick and Altman, the Coens aren't warm filmmakers and make a point of letting you know they're not. They do, in fact, sit in judgment on their characters, often portraying them as selfish, stupid, vicious, weak or deluded — sometimes all at once. But it's possible for a dramatist to be merciless toward his characters while caring deeply about humankind and taking pains to show the fundamental struggles that unite every member of the species, even the ones you wouldn't mourn if a flood washed them away or an assassin with a Prince Valiant haircut shot them in the forehead with a cattle gun.

Kubrick, Buñuel and Altman showed us how. They didn't cut characters any slack as individuals. But all three cared deeply about the human race, and their signature works — Kubrick's "Dr. Strangelove," "2001" and "Barry Lyndon"; Buñuel's "Exterminating Angel," "Belle de Jour" and "The Discreet Charm of the Bourgeoisie"; Altman's "M*A*S*H," "McCabe and Mrs. Miller," "Nashville" and "Short Cuts" — combined scalpel-sharp dissections of individual psychologies with a lament (subtle but always detectable) for the evil that people do to each other, and for the institutions, governments and belief systems that humans create and sustain in order to justify and perpetuate evil. In their own unique ways, these directors all illustrate Charlie Brown's credo: "I love mankind; it's people I can't stand."

So do the Coens. The Minnesota-reared writing and directing team loves to kill off main characters in startling and often horrifying ways (the final stretch of "Burn After Reading" contained their most surprising and savage screen deaths since "Fargo"). And their career-long default mode — half-satirical, half-fabulist — encourages, perhaps demands, a caricaturist's eye. Nobody but Jim Jarmusch is better at showing the chasm between a character's puffed-up self-image and the world's low opinion of him via an unflattering haircut, an unwittingly clichéd item of clothing or an annoying verbal tic (Walter Sobchack hit the trifecta in the Coens' "Big Lebowski" with his flattop haircut, khaki hunting vest and apropos-of-nothing rants about Vietnam).

But an attentive and open-minded viewer of the Coens' films should detect something more than a bugs-against-a-windshield approach to storytelling. A subterranean stream of sadness, dread and outrage runs beneath every one of their movies, even the outwardly "light" ones. So does a sense of social and often spiritual striving. The Coens' characters may be dumb, greedy or outright wicked, but nearly all are, in their eccentric, sometimes dumb-ass ways, groping after self-betterment and happiness — and the Coens acknowledge their desperate boldness through humor and sweetness even as they enumerate their moral lapses and show how their weakness and stupidity snowballs into catastrophe.

The Homeric heroes of "O Brother," traversing a mythical South and reinventing themselves as popular singers en route to reunite with their families; Ed Crain in "The Man Who Wasn't There," balancing a noir hero's coldblooded blackmail scheme against his helpless (and faintly redemptive) urge to help the naive teenage pianist Birdy Abundas, whose musicianship is nearly as fine as she is; the cantankerous widow Marva Munson in "The Ladykillers" doing her late husband proud by continuing to serve as a pillar of her community and demanding that the ruffian sinners (and secret thieves) in her basement act like gentlemen; Llewelyn Moss in "No Country" recklessly and impulsively staking his future (and his and his wife's lives) on a once-in-a-lifetime windfall; Hardbodies employees Linda Litzke and Chad Feldheimer in "Burn After Reading" trying to vault out of their glorified wage-slave status and become (figuratively or literally) beautiful people by blackmailing recently fired intelligence agent Osbourne Cox (who is himself attempting a life-improvement Hail Mary pass in the form of a muckraking memoir). And let's not forget the title character of this year's "A Serious Man": Larry Gopnik, a professor, husband, father and suburban homeowner. The poor schnook struggles to hold on to his job and his marriage and the respect of his children and the few shreds of dignity he mistakenly thinks he still possesses while enduring a relentless assault by historical and sociological forces too amorphous to define yet too powerful to resist: consumerism, secular humanism, potent weed, free love, rock 'n' roll.

The filmmakers encourage us to laugh at these poor saps. But they also make the laughs catch in a viewer's throat by building a detailed social and moral context for all the shenanigans — a context so vast and oppressive, so simultaneously familiar and unnervingly mysterious, that we can (and should) recognize it as a dramatic mirror of our world, however circumscribed or seemingly limitless we consider that world to be. Joel and Ethan Coen have a more precise (and prominent) moral compass — a truly Manichaean sense of right versus wrong — than any comparably prominent mainstream American filmmakers except Steven Spielberg. But unlike Spielberg, the Coens aren't addicted to happy endings, maybe because they're more inclined to show life as it is rather than life as they think it should be. They're fascinated by the shadow that falls between the ideal and the reality, the process by which life as it should be becomes life as it is.

When you watch a Coens' film, you're not seeing reality but its exaggerated and distilled representation, an actual landscape reconfigured as a moral one — a characteristic driven home by such tells as regular cinematographer Roger Deakins' high-contrast images — gloomy interiors cut by shafts of sunlight, evoking Joseph Conrad's descriptions of light and shadow as moral signifiers — and Carter Burwell's mournful and reflective scores, which push against the absurdly stylized violence and slapstick, and contaminate comedy with tragedy.

Maybe cinematic illiteracy accounts for the "cynics and misanthropes and nihilists, oh my" refrain. If you pay attention only to the Coens' plots, characters and snappy dialogue, you be justified in writing them off as shallow, hateful bastards. But that's a book-report approach to moviegoing that ignores picture and sound. The literary qualities in the Coens' films are text; the filmmaking is subtext.

If it didn't reduce the Coens' multifaceted brilliance to a self-help title, one could summarize their 25-year output as, "When Bad Things Happen to Good (and Bad) People." Although they were raised Jewish in more or less the circumstances and period depicted in "A Serious Man," the Coens are rumored to make movies from an agnostic or atheistic perspective. It's hard to say where they're coming from on the theological spectrum, considering they hold their personal cards so close and get a kick out of misleading reporters and fans. (Their 1990 compilation of screenplays is introduced by a fictional character, an incarnation of their editing pseudonym Roderick Jaynes — an aged, cranky Brit that despises the Coens' "mucking about with the camera" and considers "Miller's Crossing" a step up from their first two films because "the actors were finally issued proper suits.") But whether the Coens believe in an according-to-Hoyle supreme being is beside the point, because for all intents and purposes, their movies are suffused with the Kubrickian sense of humankind as apes who think they're much further removed from the prehistoric bone pit than they actually are — and a similarly Kubrickian sense of a higher power that could be scientifically explained if we were evolved enough to understand the math, which we are not. The Coens' most desperate and brutalized characters are closer to contentment than they realize, and their most complacent or settled characters are closer to disaster. The flood in "O Brother," the flying saucer in "The Man Who Wasn't There," the drawling satanic thief in "The Ladykillers," the ownerless drug stash and the implacable assassin Anton Chigurh in "No Country," the misplaced CD and the improbable but inevitable shooting of the man in the closet in "Burn After Reading," and the elderly revenant and the gathering storm clouds and the mantralike and faintly sinister repetition of Jefferson Airplane lyrics are all different versions of the same thing: the unanticipated life-changing force; the angel/devil, the miracle/curse; the tectonic shift that occurs beneath apparently solid ground; in other words, the Test.

In the Coens' universe, it doesn't matter whether a character survives or otherwise "passes" the Test; that's not the point of the Test. The point is to see what the characters are really made of, and see if the characters, by enduring the Test, realize who they truly are or could be, as opposed to who they thought they were or fantasized they were — and discern (perhaps for the first time in their lives) the difference between life as they thought it was and life as it is. If Ed in "The Man Who Wasn't There" or Llewelyn in "No Country" or Linda or Chad or Osbourne or Harry Pfarrer in "Burn After Reading" were able to step outside themselves for a half-second and stay there — and experience a moment of true clarity rather than flattering themselves into thinking they've experienced a moment of clarity — they would not have met such ignominious ends. But the odds against them are steep.

The Coens' characters look in mirrors but don't really look at themselves — they're people who talk at other people but not with them. Roughly 80 percent of the dialogue in "Burn After Reading" is stepped on by another character, and almost none of the implied or actual social contracts (employment, matrimonial, legal) are honored. And the Coens' most decent characters — Marge Gunderson in "Fargo," Norville in "The Hudsucker Proxy," Carla Jean Moss in "No Country," Ted Treffon in "Burn After Reading," Larry Gopnik in "A Serious Man" — are essentially powerless against the immense and/or terrifying forces allied against them. They tend to succumb to that brute force or triumph over it through a combination of coincidence, surprise and the innately chaotic nature of evil. The best they can hope for is to survive bad fortune with their integrity intact, or go down swinging. In the Coens' universe, such an outcome counts as a victory. This isn't nihilism, cynicism or misanthropy. It's just demanding and true, and a lot tougher than what audiences are used to.

"You can't stop what's coming," says Ellis in "No Country for Old Men," a film that's not just about a drug war or the hunt for a serial killer, but the cataclysmic displacement of one way of life, one society, one philosophy by another, and the necessity of admitting one's vulnerability, fallibility and smallness in the greater scheme. "It ain't all waiting on you," Ellis says. "That's vanity." That's as close as the Coens get to straightforward, unironic words of wisdom. That so few of their characters experience the epiphany that Ellis demands is the wellspring of all that's comic, and tragic, in their work.