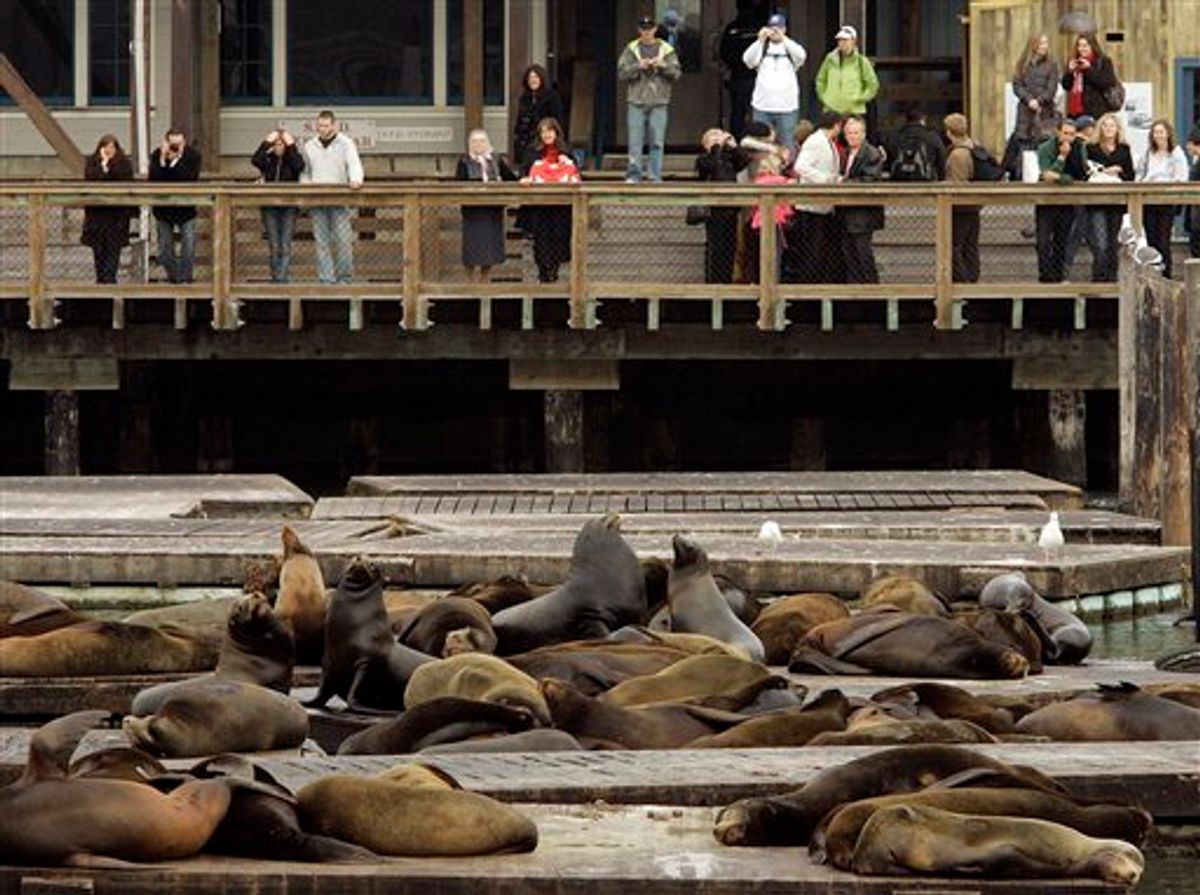 FILE - In this Jan. 14, 2008 file photo, Tourists watch sea lions on boat docks at Pier 39 in San Francisco. Last month, marine scientists counted more than 1,500 sea lions on fabled Pier 39, a record number that delighted tourists and baffled experts. Why so many? Why were they sticking around? But now, almost all of the sea lions are gone, leaving the experts guessing where they went and why. (AP Photo/Ben Margot) (AP)
--

Two mysteries surround a huge herd of sea lions that were hanging out on a pier in San Francisco Bay: Why did so many show up, and why did so many leave at once?

Just last month, Pier 39, famous in San Francisco for its sea lions and the throngs of tourists they attract, was groaning under the weight of more than 1,500 of the animals. The record number delighted tourists and baffled experts.

Marine experts suspect the sea lions came and stayed for the food, then left largely for the same reason.

"Most likely, they left chasing a food source," said Jeff Boehm, executive director of the Marine Mammal Center in Sausalito, which runs an information center and gift shop at Pier 39. "It's probably what kept them here in the first place."

The animals began leaving in droves the day after Thanksgiving, almost as if someone had issued an order. But Boehm said the fact that so many sea lions stayed for so long is even stranger than their disappearance.

"They do move off," Boehm said, adding that in the fall, older sea lions head to breeding colonies in the Channel Islands, off the coast of Southern California along the Santa Barbara Channel. Younger sea lions, he said, "don't mind those rules and tend to travel far and wide."

On Tuesday, 10 sea lions lounged and swam and dove from the docks, spreading themselves out where the animals were stacked three and four deep just a month ago. The bulk of the herd probably followed their favorite foods, sardines and anchovies, Boehm said.

The younger ones still sticking around Pier 39 were enough to satisfy hordes of visitors huddled against the wind to watch them. The sea lions huddled together, dove off the docks, and honked and barked.

"We're happy with what we see," said Carmen Fernandez of Miami Beach, Fla., who was watching the sea lions with her husband Carlos.

Despite the sea lions' abrupt disappearance, Boehm said the Marine Mammal Center is not concerned that they have departed for good. While more than the usual number have left -- usually about 40 remain -- it is very unlikely, Boehm said, that they won't come back. By spring, the herd will probably be back, as usual, he said.