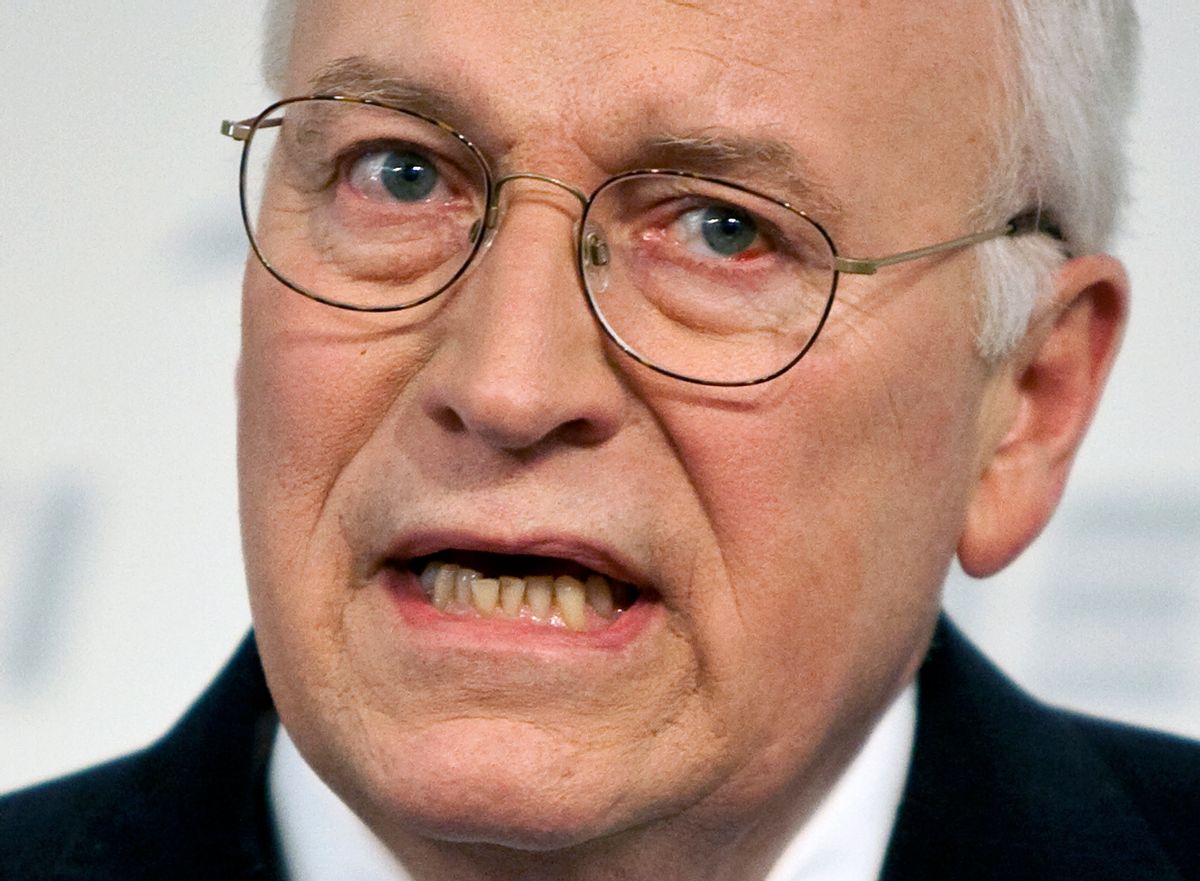 U.S. Vice President Dick Cheney speaks about national security at the American Enterprise Institute in Washington in this file image from May 21, 2009. The CIA withheld information from Congress about a secret counterterrorism program on orders from Cheney, a leading U.S. senator said on July 12, 2009. REUTERS/Joshua Roberts/Files (UNITED STATES POLITICS IMAGES OF THE DAY) (Reuters)
--

First of all, I have to credit the Cheney/Politico – Palin/Facebook comparison to the great Glenn Greenwald, who Tweeted it this morning. But I couldn't resist using it today on Hardball, debating Ron Christie about the importance of Cheney's attacks on Obama. The video is below.

Last week we named Cheney's dozens of attacks on Obama one of our top Bogus Stories of 2009. When he attacked Obama once, twice, three times, it was news, especially for a VP to hit a president so soon. After that it was a Dog Bites Man story. But Cheney stepped up his attack on Obama today in a way that was actually news. Of course, by merely releasing a statement to his friends at Politico, he ensures he can broadcast falsehoods to the media without being challenged, just the way Palin uses Facebook. Politico should be ashamed of merely broadcasting Cheney's lies, but I can't deny they're news this time. Still, I think Palin should teach Cheney to use Facebook so he can cut out the middlemen.

Cheney let loose a number of whoppers in his attack on Obama, chief among them the slur that the president is "trying to pretend we're not at war." What crap. Obama has escalated in Afghanistan, he's still bogged down in Iraq, and by most reports he's expanded our military involvement in Pakistan and Yemen, and maybe even Somalia. The Democratic president's anti-war base is up in arms at the extent to which Obama has embraced his war presidency. He's certainly not hiding from it.

Cheney also slapped Obama for trying Umar Farouk Abdulmutallab in criminal court; of course the Bush administration did that with shoe bomber Richard Reid, as well as so-called "20th hijacker" Zacarias Moussaoui. A lot of people have pointed out that President Bush never made a statement about the shoe bomb; he mentioned it at a press conference six days later. There is a huge double standard when it comes to national security – with too much of the MSM playing along -- and Cheney is capitalizing on this.

Worst of all, Cheney's cast his lot with the worst of the right-wing crazies in this statement, by saying that Obama cares most about "social transformation — the restructuring of American society.” That's on the edge of what the tea partiers call Obama – a socialist -- and it's a total lie. As a left-liberal, let me tell you: Barack Obama is a corporatist, centrist Democrat. His financial regulation is too easy on the banks and Wall Street. His health care reform approach is too generous to insurance companies and big pharma. He's caved too often on issues of civil liberties, detention of enemy combatants, and state secrets. As conservative as Cheney is, he's a veteran of American politics, and he knows where Obama fits on the spectrum: right in the middle.

The former vice president is just taking a cheap shot here that aids his overall goal: Delegitimizing this president, and he's been doing it from day one. Cheney has emerged as the leader of the Republican Party, and some of his recent obnoxiousness seems at least partly directed at his old boss, President Bush, who by contrast has acted the way former U.S. chief executives traditionally do: Keeping quiet and respectful. Cheney's still angry that Bush wouldn't pardon his buddy Scooter Libby and that he began to put some limits on torture and interrogation. So he's aiming at two presidents with his belligerence.

But I wonder where it stops. Clearly Cheney's aiming to take over the Republican party and bring about a neocon restoration. I'm blown away by the immediate disrespect and political posturing by people like Cheney, Sen. Jim DeMint and Rep. Pete Hoekstra have shown the president at a time of real threat. (Oh, and Pete Hoekstra: I think raising money to fight the "Obama/Pelosi" approach to national security by running for Michigan governor is a little backwards; you have a tiny bit more influence on such issues on the House Intelligence Committee.) Way to aid the terrorists, guys: Undermine the president as a naïve weakling unready to fight. I think the kneejerk partisan savaging of Obama is un-American, it's what Republicans would have called traitorous had anyone tried criticizing Bush this way any time after 9/11 (actually, you were called a traitor for challenging the Iraq war in 2003).

There were serious communication breakdowns in the handling of intelligence about Abdulmutallab, and we need to get to the bottom of it. There may be blame for the Obama administration; there may be some for its predessor at well. What's different here is the immediate impulse to play politics with what could have been a tragedy. Five-deferment Dick Cheney, who had "other priorities" besides fighting in Vietnam during his generation's war, should be ashamed of himself, but he has no shame.

Here's hoping he gets a Facebook page, and leaves Politico alone so they can do real journalism with their enviable resources. I bet he'd be great at Mafia Wars; not so interested in FarmVille. I just don't want him to poke me, and if he tries to get me to join his neocon groups, I'll unfriend him.