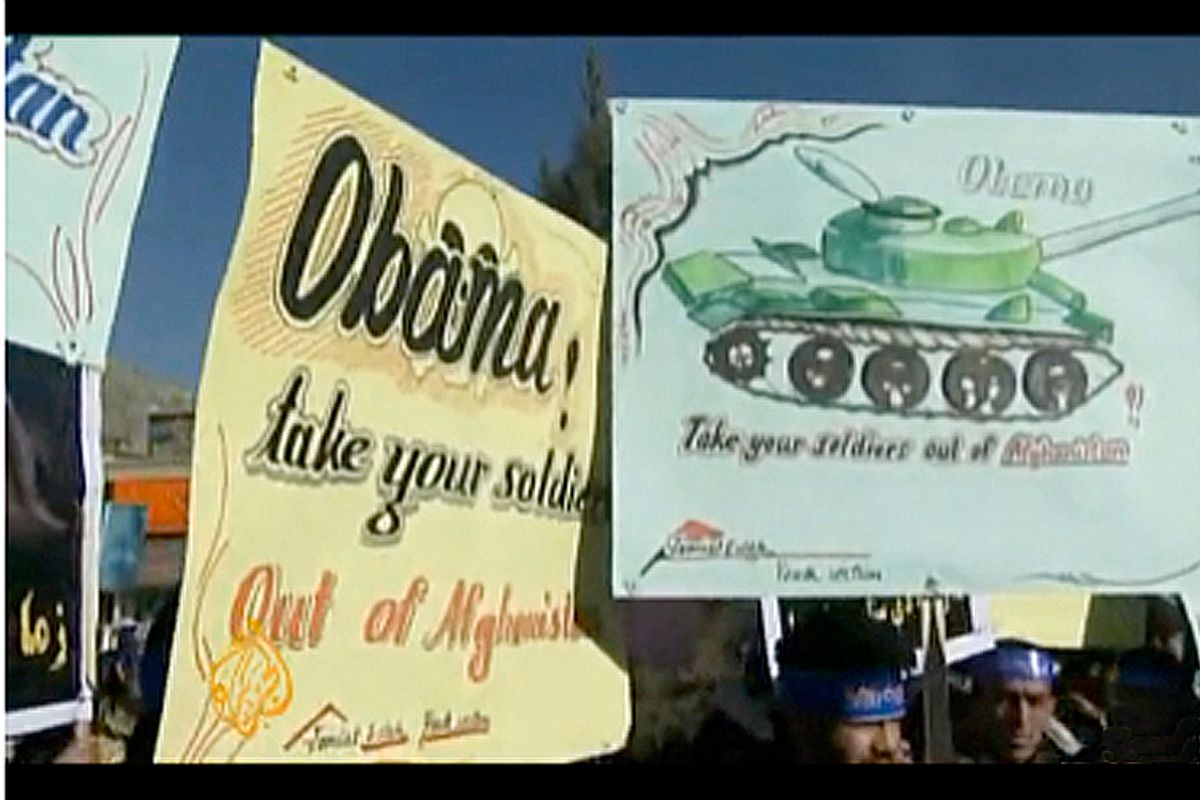 You probably won't see it in most U.S. news outlets, but on Monday morning in Kabul and Jalalabad, hundreds of university students demonstrated against U.S. strikes this weekend that allegedly killed a number of civilians. I want to underline the irony that the students in Tehran University are protesting Mahmoud Ahmadinejad, while students in these two Afghan cities are calling for Yankees to go home. Nangarhar University in Jalalabad only has a student body of about 3200, so "hundreds" of students protesting there would be a significant proportion of the student body.

The demonstrations could be a harbinger of things to come, but there was worse news. CIA field officers blown up, four US troops killed Sunday, and the rejection of most of the cabinet nominees by parliament, all signal rocky times ahead.

The past two weeks have seen the situation in Afghanistan deteriorate palpably, raising significant questions about the viability of the Obama-McChrystal plan for the country. The chain of catastrophes has been reported in piecemeal fashion, but taken together these events are far more ominous than they might appear on the surface.

First, the US military launched a raid in Kunar Province two days after Christmas on a village a night, in which President Hamid Karzai alleged that 10 civilians, some eight of them schoolchildren, had been killed (some say dragged out of their beds and executed). The New York Times reported the head of a Kabul delegation to the village saying, “They gathered eight school students from two compounds and put them in one room and shot them with small arms." (The spokesman is a former governor of Kunar and now a close adviser to President Hamid Karzai -- i.e. not exactly a pro-Taliban source.) The charitable theory is that in a nighttime raid, U.S. troops got disoriented and hit the wrong group of young men.

The outraged Afghan public saw this raid as an atrocity, and on Wednesday December 30, they mounted street protests against the U.S. in Jalalabad, an eastern Pashtun city, and Kabul. In Jalalabad, hundreds of university students blocked the main roads, and then marched in the streets, chanting "Death to Obama" and "Death to America," and burning Obama in effigy. (If they go on like that, the anti-imperialist Pashtun college students of Jalalabad may attract the support of Fox Cable News...)

Even while the protests were taking place in Jalalabad and Kabul, a NATO missile strike on the outskirts of Lashkar Gah in Helmand Province was alleged to have killed as many as seven more civilians, some of them children. Now the Afghan public was really angry.

Then on Thursday, all hell broke loose when a high-level Pashtun asset who had been informing to the CIA on the location of important al-Qaida and Taliban operatives detonated a vest bomb at FOB Chapman in Khost province, a CIA forward base. The attacker killed seven field officers and one Jordanian intelligence operative detailed to the base. Those experience field officers were on the front lines in the fight against al-Qaida and their loss is a big blow to counter-terrorism. It is true that they had been drawn in to a campaign of assassination, but it is the president who gave them that task--unwisely, in my view.

The use of a double agent not only to misinform but actually to kill the most experienced counter-terrorism officers in the region showed the sophistication of tactical thinking in the Afghan insurgency.

The CIA's dependence on a double agent who finally openly betrayed them raises troubling questions about U.S. strategy and tactics in the region. Such informants essentially direct CIA drone missile strikes.

You could imagine Siraj Haqqani, leader of the Haqqani Network in Khost and over the border in Pakistan's North Waziristan, inserting such a double agent into FOB Chapman and then using the CIA. For instance, what if a middling member of the Haqqani network launched a challenge to Siraj's leadership and that of his ailing father, Jalaluddin (an old-time ally of Reagan who was warmly greeted in the White House in the 1980s)? Wouldn't it be easy enough just to have the double agent tell the CIA that the challenger is a really bad guy in cahoots with al-Qaeda? Boom. Drone strike kills Taliban leaders in North Waziristan. In this way, Siraj could have used the US to eliminate rivals and become more and more powerful. And how many double agents have given up a few Arab jihadis who had fallen out with the Haqqanis, but then deliberately followed this up with bad intel on some innocent village, making the name of the U.S. mud among the Pashtuns.

The drone strikes shouldn't be run by the CIA, and probably shouldn't be run at all. It could well be that savvy old-time Mujahidin trained in CIA tradecraft in the 1980s are having our young wet behind the ears field officers for lunch.

In short, is the bombing at FOB Chapman the tip of an iceberg of misinformation, on which the Titanic of Obama's Af=Pak policy could well founder?

Al-Jazeera English has video of these dramatic events leading up to the New Year, including the anti-U.S. demonstrations, which looked big and significant to me on satellite television.

A soldier of the Afghan army shot an American soldier, further raising suspicions between the two supposed partners. Then a Canadian unit and embedded journalist were blown up.

There were more errant U.S. strikes over the weekend, producing the demonstrations in Kabul and Jalalabad on Monday morning.

Then there were two other pieces of information coming out in the past few days that suggest all is not well.

First, a report on the Afghanistan Army threw cold water all over the idea that it could be enlarged and trained to provide security in the country any time soon. High desertion rates, illiteracy, working half days, refusal to stand and fight against the enemy, and other factors just made that prospect remote. But such training, and the substitution of the Afghan National Army for NATO and U.S. forces is the centerpiece of the Obama-McChrystal plan.

Finally, the Afghan parliament rejected 17 of the 24 nominees to the cabinet offered by President Karzai. The speaker of the House, Yunus Qanuni, supported Karzai's rival, Abdullah Abdullah, in August's presidential elections -- which many Afghans believe Karzai stole. This rejection was the Abdullah faction's chance to humiliate Karzai in revenge.

Al-Jazeera English has video on the rejection of 70 percent of the cabinet, including the old time warlord of Herat, Ismail Khan, and a key women's affairs minister.

But the step means that we go into the winter with 17 ministries headless. Having an increasingly competent Afghan government to partner with was another key element of the Obama plan. There is not one.

So, the U.S. is killing schoolchildren far too often, enraging the Afghan public. It has provoked a student protest movement against it in Jalalabad and Kabul. Its informants are double agents. Its supposed partner, the Afghan army, mostly doesn't actually exist and couldn't be depended on to show up to anything important; and that is when they aren't taking potshots at U.S. troops; and there is no Afghan government as we go into 2010.

President Obama may have a lot on his plate, but Afghanistan could make or break his presidency. If he doesn't view what has happened there while he was in Hawaii with alarm and begin thinking of alternative strategies, he could be in big trouble.