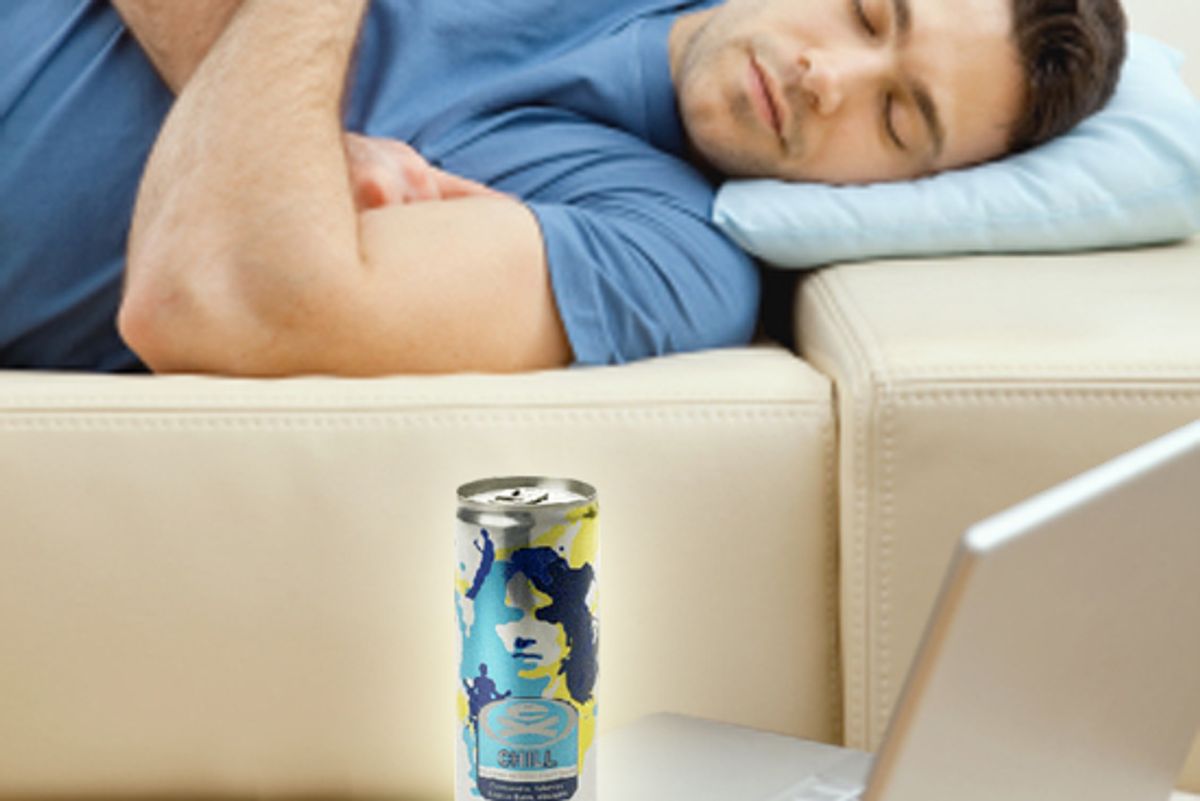 According to advertising agency J. Walter Thompson, one of the hottest new trends for 2010 is going to be the "anti-energy drink" -- canned or bottled beverages that, unlike energy boosters like Red Bull or Monster, will make you calm down and maybe think about lying on your couch with some snacks. They include sedative ingredients, like chamomile, rose hips, melatonin and valerian root, and many claim to enhance concentration. Some newer offerings are also made with kava, a root consumed by Pacific Islanders as an intoxicant. (An Australian government report has claimed the drug fosters family neglect and health problems among aboriginal people, but so far it hasn't run into any setbacks with the FDA.)

While Malava Relax launched in 2006, and was followed shortly be something called Ex Chill, the first high-profile anti-energy drink was Drank, released in 2008 by Innovative Beverage (which also distributes Arizona iced tea). The drink gained notoriety because its name played off a dangerous cough-syrup cocktail called "Purple Drank," which is popular among rappers -- Houston rapper DJ Screw died of an overdose -- and according to Drank's press release "was inspired by today's popular hip hop artists who embrace the much sought after hip hop lifestyle that encourages people to capture a stress-free state of mind." Classy.

A half-dozen products have followed in Drank's footsteps, including Mary Jane's Relaxing Soda, the suggestively named brainchild of a laid-off nutritional supplement developer (which was recently the subject of an L.A. Times profile), and a Drank imitator called Purple Stuff.  Not afraid of taunting Red Bull with its name, Slow Cow, a Canadian product, will hit U.S. shelves this year.

While the makers of Drank initially targeted the hip-hop community (Slogan: "Slow your roll"), the controversy around its product has likely helped it grow beyond fans of Lil' Wayne. (It claims its drinkers also include students, professionals and insomniacs.) According to Time magazine, Innovative Beverage's sales were up 198 percent in 2008, and its first quarter 2009 revenues were up 534 percent compared to the previous year. Bizarrely, Mary Jane's is by far most popular in Southern California (which constitutes 70 percent of its sales), where it sells an average of 14 bottles a day per 7-Eleven store. If we had to guess, it's the Golden State's stoners that are stocking up.

It's nice to see an antidote to the overcaffeinated, stomach-churning energy drinks of the past few years -- at a time when people are worrying about mortgages, student loans and getting laid off, we're all looking for something to bring us down from the anxiety ledge -- but when the novelty wears off and, god help us, the economy improves, it's hard to imagine this trend lasting. And those people who are truly suffering from recession-related anxiety aren't going to be spending their hard-earned cash on a fancy bottle of soda -- they'll be splurging on something even trendier: house payments.