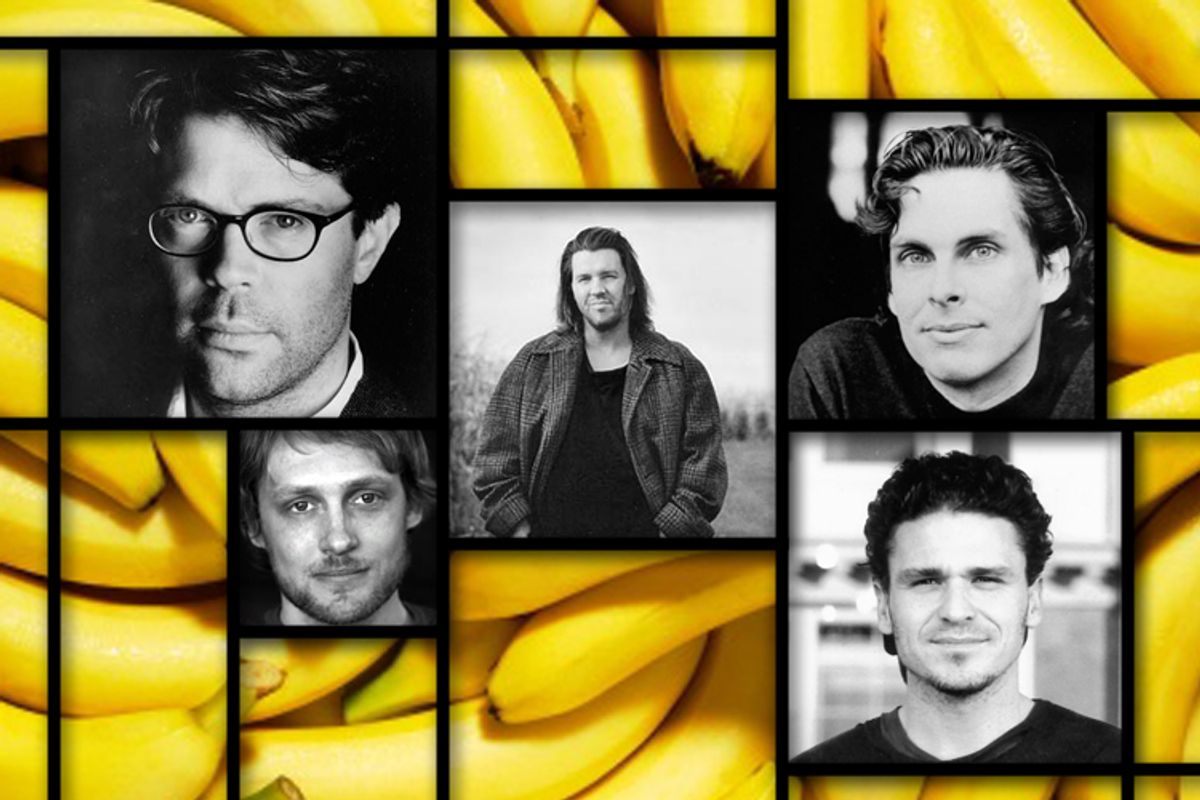 In Katie Roiphe's world, the boy crisis is fictional. Not in the sense that the much-hyped threat to manliness is a fiction. No, the provocateur argued in Sunday's New York Times Book Review, that evidence of masculinity's decline is found in fiction -- more specifically, in the imaginary sex lives of imaginary male protagonists in novels written by men. This is a new take on a familiar argument, but Roiphe places the blame on the very same culprit framed for ruining the real-life sex lives of real-life men: feminism.

Today's revered young(ish) scribes are not literary lions, she says, but cuddly little cubs. Roiphe specifically has in mind Dave Eggers, David Foster Wallace, Michael Chabon, Benjamin Kunkel and Jonathan Franzen. (This short roster leaves out many members of the new guard of novelists that do not fit her thesis, like Junot Diaz, but whatever, moving on.) These writers "are so self-conscious, so steeped in a certain kind of liberal education, that their characters can't condone even their own sexual impulses," she argues. In this genre the "sexual style is more childlike; innocence is more fashionable than virility, the cuddle preferable to sex." Having grown up under the influence of feminism, these guys engage in a "convoluted, postfeminist second-guessing" instead of "conquest or consummation."

This is a pity, says Roiphe -- who in the past has written about her own desire for an old-fashioned manly man – because, in comparison, there is "a certain vanished grandeur" in the scandalous sex writing of John Updike, Philip Roth, Norman Mailer and Saul Bellow. These alpha males wrote graphically about carnal (and sometimes violent) lust. Not only were they unabashed about their conquest of women's bodies, writes Roiphe, but there also "was a feeling that [these] authors were reporting from a new frontier of sexual behavior: adultery, anal sex, oral sex, threesomes." Blame today's limp-dick literature on the "crusading feminists" who stridently railed against these virile novelists, she says.

Her argument is uncomfortably reminiscent of the claim that sexually aggressive college girls are scaring guys soft or that the lack of retro dating rules has rendered young men fearful and weak (read: feminine). As overblown as these arguments can be, I suspect they provoke so much ire because they have a strain of truth (just as I admire Roiphe as a polemicist with a keen cultural understanding, despite her tendency to cherry-pick evidence). Feminism has culturally upended many things, including our notions of masculinity, and that can be frightening. I've had too many candid conversations with too many guy friends over too many pitchers of beer to have any doubt about that.

It has to be said, though: These are not all guys. These are not even most men, except perhaps among the sensitive, liberal and well-educated set to which these male novelists and fictional protagonists belong (a rarefied group indeed). Widen the cultural scope just a wee bit, and you will find no dearth of jack-hammer sex (see: Mary Elizabeth Williams' essay "How Not to Make Love Like a Porn Star"). Plenty of men still happily rely on old-school stereotypes to pick up ladies. But, fine, Roiphe has picked a very particular and personally relevant focus for her essay. Limitations aside, I read the piece and thought: There's something there there.

So, I e-mailed the article to a guy friend in his late 20s to see whether he identified with these confused and cuddly protagonists, and did he ever. He wrote back: "In college, my somewhat obtuse interpretation of feminism coupled with my desire to be perceived as a 'great guy' made me averse to appearing sexually aggressive or dominating in any way." For him, that meant reading books like "She Comes First" and letting the woman lead in the bedroom. Unfortunately, at least in one case the response to all this sensitivity was an exasperated: "Are you gay?" He explains, "I was just trying to avoid being the stereotypical tin-eared, jack-hammering brute that I was fairly certain women didn't respond to." Eventually, he learned "to dial in a more context-dependent, sensitive and confident approach." Still, he says, "that shit messed me up for a little while."

Of course that shit messed him up -- there is some real contradiction here. Thing is, young women are also coming up against conflicting cultural influences. Many of us are trying to reconcile feminist thinking with … basically every other cultural message out there. Social change brings about growing pains. Where Roiphe and I differ is that she favors a return -- at least in certain relational respects -- to an earlier time when things were simpler, more straightforward. I, on the other hand, would like to see us keep on maturing.

Roiphe's dismissal of today's sexually confused men is proof of just how far we have yet to go. It feels like she is shaming these male authors for failing to keep up their end of the bedroom charade. (You know, the one that makes it possible to have sex without either partner revealing any vulnerability or authentic, unrestricted emotions. The one where he "takes" her and, on cue, she quivers with passion.) She seems to believe that men, be they real or fictional, are supposed to emerge cocksure on the other side of young adulthood -- or at least convincingly appear to. Even the hot pink graphics accompanying the article practically scream: C'mon you sissies -- grab your balls, be a man! But I dare say the real issue here -- for men and women, too, clearly -- is growing up, not manning up.