Why Johnny can't be deducted

As a foster mom, I clothed, fed and cared for a child in need. But it's the birth mother who gets the tax break 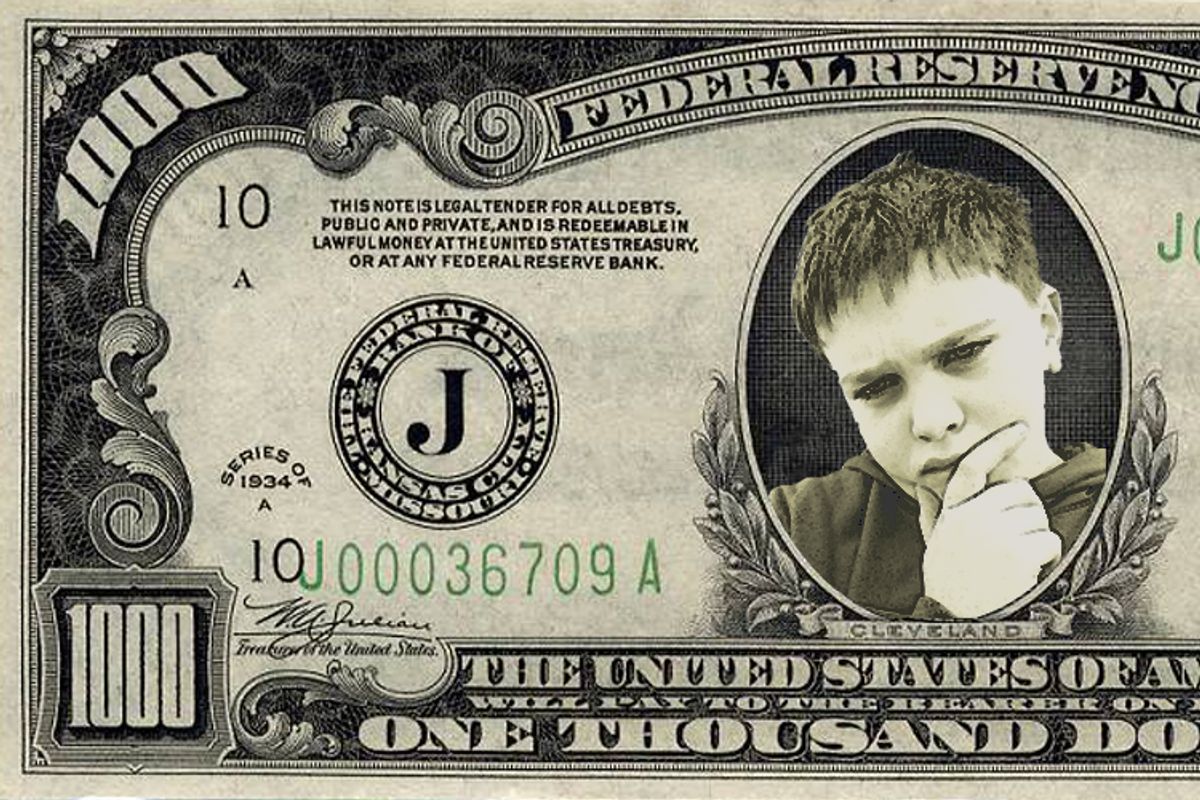 The going rate for a kid in the United States is $4,600 and change to families making $110,000 or less in 2009 . At least that's what my tax prep computer program is telling me. (A $3,650 dependent deduction plus a $1,000 child tax credit.) So the mightier your uterus, the bigger your tax break. My uterus is weak and puny and has produced only one child. But my husband and I foster-parent in our hometown of Lubbock, Texas, and one of the ways the government compensates foster parents is by allowing us to claim tax deductions and credits for our charges as though they had popped out of our own baby-makers. Or so we thought.

So, I set about doing our taxes to include the little boy who spent a little more than half the year with us in 2009. No big deal, right? Wrong.

According to our case worker, the only time you get to claim a foster child as a dependent is when the state has forcibly wrenched the child away from his or her natural family. Voluntary placement kids are still deductible by their natural parent(s). (Those who want to read the specifics of the law can at IRS.gov.)

Many kids are in foster care because their parents voluntarily gave them up -- either because they could not afford to feed and house them or because they are in prison, or because they just don't want to be bothered. One of our friends fosters two little boys who were voluntarily placed at birth. They are both 6 years old now. For six years, our friend has fed, clothed, loved, band-aided, taught and honored these children, apparently all without being able to deduct them as dependents. To a single mom on a high school teacher's salary, that's a huge disadvantage, financially.

A couple of years ago, when our finances weren't as tight and we had not even dreamed of a child, I would have thought, "how crass -- griping about a tax deduction instead of thinking about helping a child." I still feel somewhat like that -- we won't stop fostering if we can't claim tax deductions; in fact, if the government revoked all tax deductions and charged people for kids instead, we'd still have had our own son, and been just as grateful for it. I just have to wonder what we are trying to achieve as a society with the policies we have set around children and taxes.

On the one hand, we have a problem with more demand for social services than we have the will or the heart to budget for. The more impoverished kids, the more demand. Worldwide population growth is an environmental concern on many levels, from food scarcity to global warming. But instead of teaching family planning in our schools and encouraging young people to have fewer rather than more children, we offer the single biggest tax incentive available to average people (outside of the mortgage interest deduction) to those who procreate the most. And we discourage families from taking care of kids whose own parents can't care for them by denying that tax deduction to at least some of those caretaker families.

The little boy we had in our home was moved to another foster family because he was behaving threateningly toward our son. He's a great little boy and is now in a home with his natural sister, where his behavior is exemplary. He and our son still play together. We would have cared for him even had we known from the start that we would not be able to claim him as a dependent.

His mom has five children. She was broke and homeless and living in her Escalade when she placed the kids in care. Now she's broke and living with some guy with whom she reportedly smokes dope and goes to bars when she's not in hairdresser classes.

She sold the Escalade and bought a little BMW 5 series with the proceeds. My heart broke thinking of the eldest child seeing her mom's new car. She's a precocious 7 years old and can count well enough to see that three car seats, two booster seats and Mom will not fit in that car. Since the mom can claim all five children despite their being in other homes more than two-thirds of the year, she should get a handsome sum back from the government after she does her taxes. Hopefully, she will use the money to get a more suitable car and put a deposit on an apartment. That's our case worker's hope anyway. I'm not holding my breath.

Foster parenting is wonderful and terrible. Amazing children, amazing love. Monotonous paperwork that goes on forever, home inspections, CPR classes, licenses, continuing education. Getting attached and having to step aside for a natural family member. Getting attached and having to admit that there are some behavior issues that you just can't handle.

Voluntary placements get turned away by our agency regularly because there is no home to place the child in. I wonder how many families won't take voluntary placement children because of the tax rule giving the deductions/credits for voluntarily placed children to their natural parent if they choose to claim them. Personally, I think that we foster parents who've actually cared for a child during the greater part of the year have earned the $4,600.