The Clintonites were wrong

The "new economy" was an illusion. Neoliberals have to admit that before they can stop the bleeding 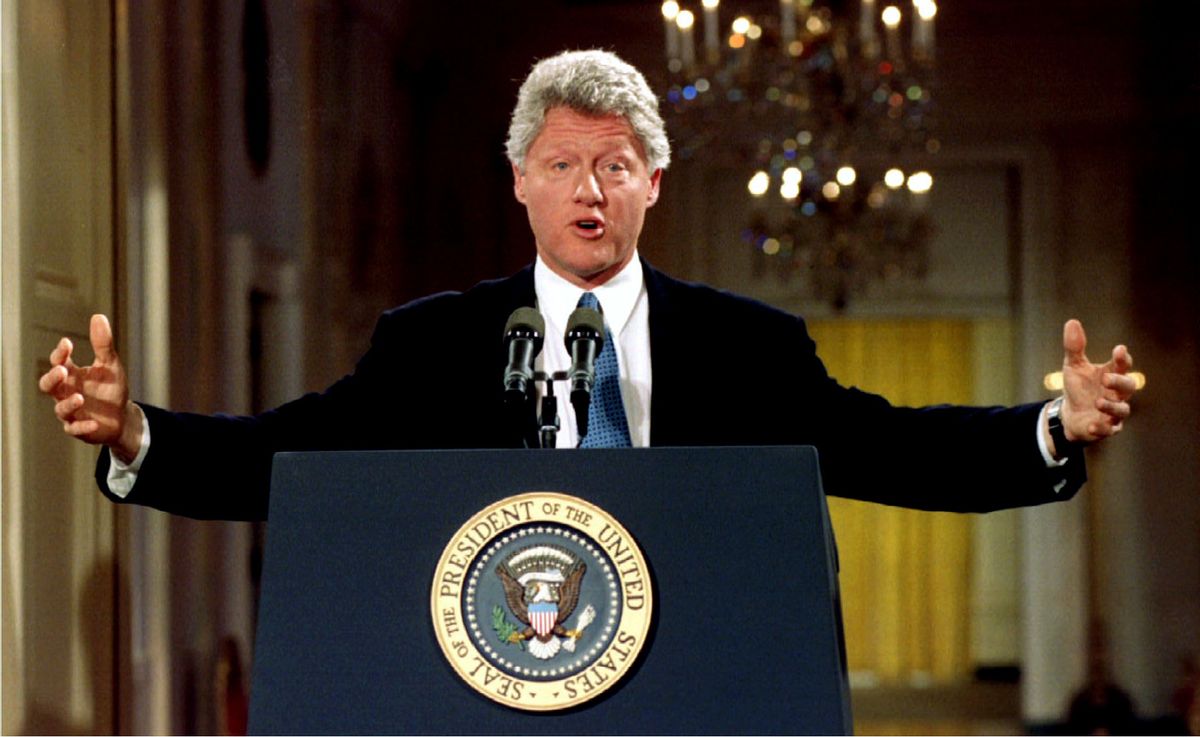 Is the American economy facing a lost decade? That is the wrong question to ask. The right question is this: Is the United States facing another lost decade? During the past 10 years, inflation-adjusted wages have stagnated or declined for working Americans; net job creation has been zero; and temporary, bubble-driven gains in the stock market have been erased.

This isn't what Bill Clinton and the other "New Democrats" of the 1990s promised us.

Remember "the new economy"? In the second half of the 1990s, after years of stagnation, the U.S. economy briefly boomed. Members of the New Democrat wing of the Democratic Party, associated with the Democratic Leadership Council (DLC) and the Progressive Policy Institute (PPI), made a number of claims.

First: The source of the boom was not a bubble associated with tech stocks, but rather a permanent increase in U.S. productivity growth produced by the information technology (I.T.) revolution. Second: Foreign money was pouring into the U.S. as a result of well-informed expectations that the U.S. would lead the world in economic growth for a long period to come. Third: Increased inequality in the U.S. was a result of the global market rewarding skilled Americans at the expense of unskilled Americans, and could be cured by more higher education.

Something like this was the cheerful and optimistic New Democrat party line in 2000, the last year of the Clinton administration. How do things look from the perspective of 2010?

It is now clear that the boom of the second Clinton term was driven by the temporary tech stock bubble. It did not mark the beginning of a "new economy" fundamentally different from the old.

It is true that official statistics showed a trend toward a higher level of U.S. productivity growth in the late 1990s and 2000s than in the period of prolonged slow growth from the 1970s to the mid-90s. But Michael Mandel and other economists (pdf link) have argued that government statisticians have exaggerated the rate of productivity growth in the Clinton and Bush years by mistaking the falling prices of imported ingredients from low-wage countries like China for gains in productivity on U.S. soil.

Between 1997 and 2007 U.S. productivity growth might have been overstated by as much as 20 percent. If this revisionist critique is right, then actual U.S. economic performance, when the stock and housing bubbles are factored out, has been much worse than anyone would have believed a few years ago. The illusory wealth generated by overpriced tech stocks and houses temporarily obscured the grim picture, but now its depressing outlines are becoming clear.

What about the claim of neoliberals in the 1990s that foreign money was pouring into the U.S. based on rational expectations of a permanent, technology-driven American boom? That pet theory of the New Democrats has been discredited by events (pdf) as well.

Investments in emerging markets have done better than investments in the U.S. in the 2000s. China and Japan have continued to buy U.S. debt, not because they are impressed with Silicon Valley's growth potential, but in order to cripple American manufacturing by keeping the dollar artificially high and the yuan and the yen artificially low. Their debt purchases are part of their strategic industrial policies on behalf of their own export-oriented manufacturers, not a vote of confidence in future American economic dynamism.

Another New Democrat myth, endlessly repeated by Clinton in the 1990s and by President Obama today, is the theory of skill-biased technical change (SBTC). SBTC held that the growing polarization of U.S. society was the result of irresistible global technological forces, not local factors with political causes, like the de-unionization of the American labor force or the inflation-caused decline of the minimum wage.

The New Democrats and like-minded Republican conservatives told us again and again that the huge gains going to CEOs and investment bankers reflected the premium attached to skills in the global "new economy."

Even in the 1990s, this explanation made no sense. After all, the skills of CEOs and investment bankers have undergone no significant change in the last half century. If the SBTC theory had been correct, you would expect scientists and engineers and office-tech specialists to be making the great fortunes, not bankers and corporate managers.

What's more, you'd expect the same forces -- technology, globalization -- to produce the same explosion of incomes at the top in similar countries. But other industrial countries, apart from Britain (dominated, like the U.S., by its swollen, parasitic financial sector), have not seen anything like America's growth in inequality.

DeLong notes that this pattern does not fit the story of college-educated workers in general deriving a wage premium from the new economy. To make matters worse for the new economy school, from 1998 to 2007, earnings for Americans with B.A.s were practically flat after inflation while the youngest college graduates suffered a slight decline in real wages.

Here's what the New Democrats of the DLC and PPI who chattered enthusiastically about the "creative class" of "knowledge workers" in the "new economy" failed to understand: The main jump in income inequality took place in the 1970s and the 1980s, before the alleged new economy created by the tech revolution.

The relative decline of wages at the bottom had little or nothing to do with technology or the global economy and everything to do with the weakening of the bargaining power of American workers vis-à-vis their employers thanks to declining unionization, an eroding minimum wage and the flooding of the low-end labor market by unskilled immigrants from Latin America, both legal and illegal.

Having misdiagnosed the problem, New Democrats, including Clinton and Obama, have consistently prescribed the wrong medicine: sending more Americans to college. According to the Bureau of Labor Statistics, most of the occupations with the greatest number of openings in the foreseeable future require only a high school education or an associate's degree, not a four-year B.A.

The most effective way to raise wages at the bottom would be to increase the bargaining power of workers, by unionizing the service sector and by tightening the labor market through restricting unskilled immigration. That would probably spur genuine productivity growth over time as employers substituted technology for more expensive labor.

But more widespread unionization is opposed by the corporate sponsors of the New Democrats. And while progressives spend oceans of ink on the effects of outsourcing on the small number of workers in the manufacturing sector, they are silent about the effects of mass unskilled immigration on the much greater number of low-wage workers in the domestic service sector.

The experience of the last decade discredits the claims of New Democrat neoliberalism. But it does not necessarily vindicate progressives. Many progressives assumed along with the neoliberals that the economy really was growing rapidly and that business in general was robbing labor of its fair share of what were believed to be huge gains.

One of the few progressives to question this orthodoxy was James K. Galbraith, who argued that most of the spike in inequality was explained by a small number of Silicon Valley and Wall Street tycoons. The crash made it clear that a significant amount of the wealth of the super-rich in the 2000s had in fact been imaginary all along.

The grim truth is that the new economy promised by the New Democrats never materialized. Yes, we have the Internet and iPhones, but the gains in productivity that have resulted so far from I.T. have been pretty minor compared to the results of the introduction of the steam engine, electricity and the internal combustion engine.

Yes, you can use Google to shop for items and order them via Amazon.com, but the factories that make them and the ships and the trucks that bring them to you would have seemed familiar to engineers in the 1950s.

The moment when much-hyped alternative energy sources like wind and solar become competitive with fossil fuels and nuclear energy seems to perpetually recede into the future. The all-renewable energy sector is 30 years away -- and always will be. A decade ago, there was a national debate about outlawing germ-line engineering of humans, on the expectation that large-scale genetic engineering was imminent. Instead, progress in biotechnology has been slower than opponents feared and supporters hoped.

The glib New Democrats who chirped in the 1990s about the wonders of the new economy were dead wrong. If ever a school of political economy has been discredited by events, it is Clinton-era neoliberalism. And yet the Obama administration's economic team is made up of recycled Clintonites, the very people who misunderstood the actual trends in the U.S. and global economy for the past 20 years.

An acknowledgement of their mistakes would be in order. But they would first have to recognize that they were indeed wrong about the central issues of our time.