Behind the food truck divide

A new gourmet parking lot captures the media's attention -- but where does it leave traditional vendors? 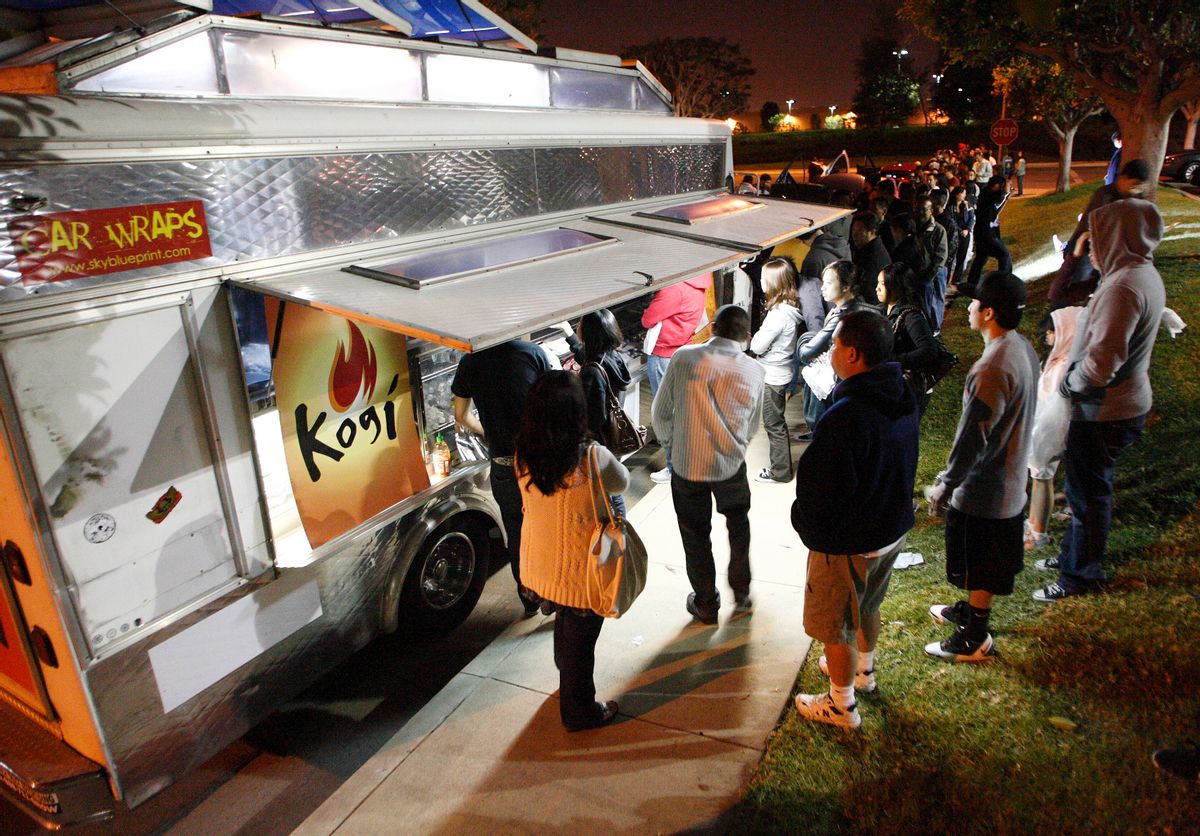 People wait for their food as others line up to place their orders at Kogi, a Korean BBQ-inspired taco truck, in Torrance, California, April 17, 2009. Kogi BBQ uses the online social networking site "Twitter" to alert followers to their location around the Los Angeles area and any other updates. REUTERS/Danny Moloshok (UNITED STATES BUSINESS FOOD DRINK) (Reuters)
--

Gourmet food trucks have been one of the more high-profile food trends over the past few years (L.A.’s Kogi Korean-Mexican fusion truck, New York’s Big Gay Ice Cream Truck, and even the Daniel Boulud food truck), but their hip vibe hasn’t kept them safe from red tape. As a recent Washington Post article made clear, truck operators face a myriad of complicated licensing and zoning regulations in cities around the country -- and hefty fines if, for example, they’re caught parked too long in the wrong place.

This week, to great fanfare, organizers turned a former used car lot in Santa Monica, Calif., into a mobile food court where gourmet wagons would be able to serve on a daily basis. The concept has long been floated as a possible solution to gourmet food trucks' woes -- creating a safe space where vendors could park all day, free of bureaucratic harassment -- but the lot's media attention (especially when it got shut down by authorities on its second day of operation) also got us thinking about L.A.'s traditional, immigrant-owned loncheros food and catering trucks. Where do they fit into all of this?

As a fascinating post on N.Y. food blog Midtown Lunch pointed out, Twittering gourmet food trucks are often at odds with more traditional vendors -- many of whom have staked out their spots for years according to a long-unspoken code of conduct, and are understandably threatened when a hyper-mobile upstart shows up a few feet away. To find out more, we called Erin Glenn, from the Asociación de Loncheros L.A. Familia Unida de California, a group that represents the city's catering and food truck operators, and talked about loncheros' real concerns, why some people don’t seem to want them in their neighborhoods -- and why a food lot isn't going to solve many of their problems.

Why has there been so much bureaucratic resistance to food trucks in some parts of the country?

Some people have suggested that designated food-truck lots – like the one that opened, and closed, this week – are a solution to some of these regulation problems.

I think they’re an option. I think it could solve some of the traffic problems. But for the more traditional food trucks, it’s not really about having a safe spot to operate in. Most of our trucks have been operating in the same space for years. They don’t have any trucks to outsource to other areas if they run into problems with ordinances. If they can’t operate, they can’t feed their families.

So what kinds of problems do the loncheros face?

There’s been a stigma attached to "taco trucks" – which is often used as an insulting or inaccurate term. People have this idea that the more traditional trucks are rogue entities that are not paying taxes and not having any kind of overhead. Our members have to have the appropriate permits to operate. They have to pay upward of $200-$300 per week to have their trucks parked and washed. One regulation we face is that when people sell older trucks to another person, the cost of having to upgrade it is ridiculous. It can be detrimental to people trying to operate their own business.

I think the catering and food truck industry has experienced a renaissance, but the infrastructure isn’t taking into account this change and how much this industry contributes to the community that they operate in.

So basically, it’s an industry that’s had a stigma attached for a long time -- because it's largely immigrant-run -- and now that it’s gotten a gourmet makeover, the rules haven’t really changed?

It’s made some tremendous gastronomic contributions to the city. This food is really traditional but some of it is much healthier than the typical fast food fare. If you’re going to eat at a taco truck, and you eat a carnitas taco, I’m willing to bet that the salsa is made from fresh vegetables, daily, and it’s more healthy than something that you get at fast food restaurants.

What kind of anti-immigrant sentiment are we talking about?

There’s a lot of scapegoating going on -- and a lot of misperception. One of our members, for example, was having an issue in the Echo Park section of Los Angeles, where they’ve been operating for over five years. Some LAPD officers were harassing them on a daily basis, because some of the established businesses thought they were engaged in illegal activity and that the clients caused a ruckus and urinated at night. We were able to do an investigation, and figure out that it wasn’t the clientele that was responsible, it was the people who were coming out of a bar across the street. Now the LAPD officers are helping the same vendors.

How does the attention around gourmet food trucks -- and food truck lots -- affect you?

Any attention is good attention. I think it keeps food trucks and the idea of food trucks in people’s minds – and it can get legislators to remember that this is an industry that is important and that people care about. If legislators in any city want to make a move against catering and food trucks, given the media attention, they’re going to have to think twice about it.