GOP Senate tsunami? Not yet 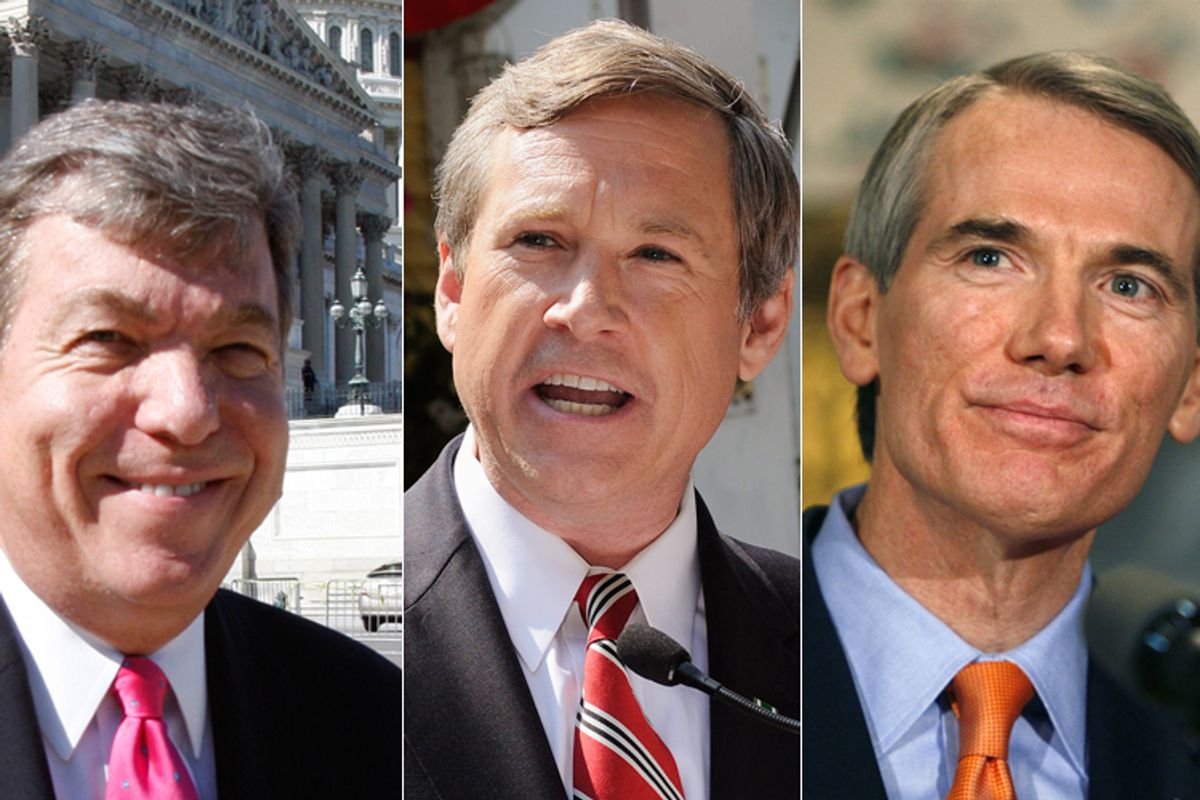 The tendency to exaggerate Republican prospects and Democratic woes is among the most consistent biases in American mainstream media -- as yesterday’s coverage of Senate race developments demonstrated -- and will only grow more pronounced as the midterm elections draw closer. All the headlines and analyses depicting a “vicious cycle” of Democrats retiring fell apart upon even a moment’s scrutiny of the Connecticut situation. If the polls leading up to the Dodd and Dorgan retirements were accurate, then both their seats would have leaned strongly Republican next November – and now only one of them does, leaving a net plus for the Democrats today.

So despite the historic problems faced by midterm incumbent parties and the specific troubles that afflict the Democrats in power, skepticism remains the appropriate response to portents of doom. With respect to the Senate, Republican retirees still outnumber Democrats, and the number of competitive seats is closely divided. The fate of the 60-seat majority is not preordained. Yes, there are many warning signs for Democrats, including declining party identification and dissatisfaction in the base. But before the conventional wisdom endorses a GOP juggernaut, consider a few of the recent findings of Rasmussen Reports -- a poll respected but often criticized as too favorable to Republicans.

Start with Illinois, the president’s home state, roiled by the Blagojevich scandal and the tainted appointment of Roland Burris to Obama’s Senate seat. Given those circumstances, many analysts have tabbed the Senate race there as a potential Republican pickup, and of course it could be. But last month, Rasmussen found a dramatic drop in support for Mark Kirk, the leading Republican in that race, when matched against the likeliest Democratic nominees (Burris isn’t running). According to Rasmussen, Democratic State Treasurer Alexi Giannoulias appears to have reversed the three-point lead that Kirk held over him last August. And the same poll, taken in early December, found even sharper gains against Kirk for the other Democrat aspirants in the Senate. This remains a very competitive race, but the drift over the past six months certainly isn’t toward the Republicans.

Then look at Ohio, where incumbent Republican George Voinovich is retiring. While Republican Rep. Rob Portman appears to have an edge, says Rasmussen, he isn’t exactly pulling away from the leading Democratic candidate, Lt. Gov. Lee Fisher. Portman’s minuscule lead over Fisher has gone up by a meaningless 1 point since September, when he was ahead 41 to 40.

And in Missouri, where Republican Sen. Kit Bond is leaving an open seat, Democrat Robin Carnahan has pulled slightly ahead of Republican Roy Blunt since last September, when they were tied at 46 percent. Actually, Blunt’s support dipped to 44 percent, while Carnahan’s was unchanged.

Yes, Democratic seats are plainly in jeopardy in places like Nevada, Arkansas and even Delaware. But more important for now is that the Republicans remain supremely skilled at hyping their strengths and hiding their weaknesses, while the Democrats still fumble and mumble -- so the Republicans almost always control the narrative.

What those Rasmussen numbers suggest is a more nuanced reality. Republican advantages could quickly evaporate amid a volatile electorate -- and as with yesterday’s retirements, the recent trends are not as dire as right-wing propaganda and mainstream prognostication proclaim.