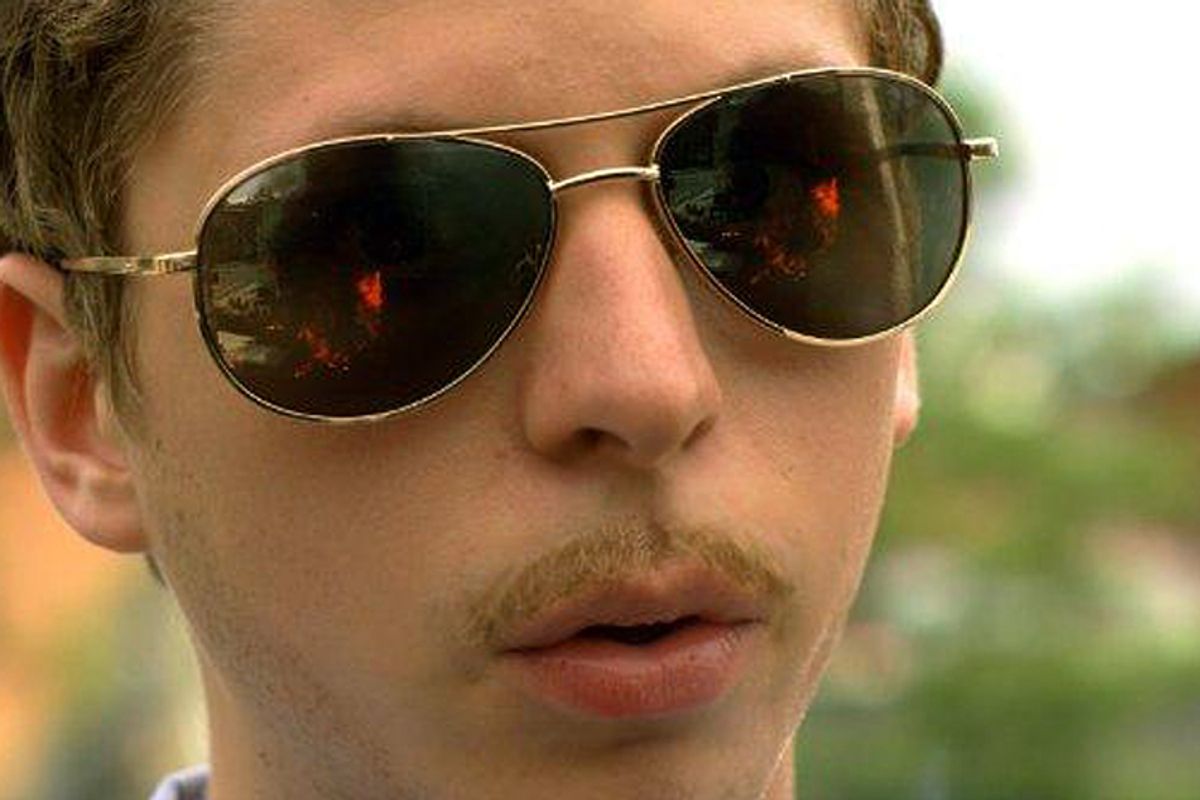 Michael Cera in "Youth in Revolt"
--

But miraculously, Miguel Arteta's "Youth in Revolt," based on C.D. Payne's series of novels about an awkward, brainy kid trying to navigate the godforsaken territory of sex and love, doesn't feel like a superfluous entry in the genre. The picture has enough charm to make us feel something for its shy, gangly protagonist -- who, incidentally, is saddled with the decidedly unsexy name Nick Twisp -- and enough bite to keep us from wanting to kill him: Cera's Nick is cute, but he's not too cute. Getting laid out of pity may be better than not getting laid at all, but "Youth in Revolt" has too much respect for its protagonist to allow that to happen. And along the way, it even gives the adorable manchild Michael Cera the chance to reinvent himself as a possible sex symbol -- in other words, it allows him to be a man.

"Youth in Revolt" opens with the obligatory introductory scene in which the hero laments his virginity and his lack of babe-attraction skills. His parents are divorced: His mother (Jean Smart) is a tough blonde who's taken up with a horny, taciturn loser (played, in just a few brief scenes, by hairy fireball Zach Galifianakis). Nick's dad (played, in a stroke of genius casting, by Steve Buscemi) has a new squeeze, a much younger, Playmate-caliber blond (Ari Graynor, who appeared as the endearing, drunken friend in "Nick and Norah's Infinite Playlist"). There's no place for Nick in these mixed-up parental equations, and so when he meets and instantly falls for another misfit, a sly, smart minx named Sheeni Saunders (Portia Doubleday), he dreams of a way for the two of them to be together. The obstacles -- among them Sheeni's disapproving Jesus-freak parents (played by Mary Kay Place and M. Emmett Walsh) and the fact that Sheeni doesn't live in Oakland, where Nick is stuck with his mother -- are so numerous that the desperate Nick dreams up an alter ego for himself. Nick Twisp, with his skinny arms dangling from the sleeves of his nondescript beige polo shirt, becomes Francois Dillinger, a dashing European in a pressed button-down shirt and slim white jeans, which are hemmed just short enough to show off his obviously expensive leather driving mocs.

Did I mention that Francois also has a pencil mustache? While Nick has a natural tendency to hang back, opting for the safe route whenever possible, Francois instead channels the devilish lizard Marcello Mastroianni in "Divorce, Italian Style." Francois has a sense of decorum, but no respect for authority, and he coolly urges Nick to take bigger and decidedly ill-advised chances: The various mishaps and shenanigans dotting the narrative here include theft, arson and cross-dressing, as well as the infiltration of a tony boarding school and several scenes in which Nick is forced to appear in public wearing nothing but undershorts, which, of course, appear to be about two sizes too big for his wispy frame.

"Youth in Revolt" sometimes works too hard at being quirky: There are places where Arteta, whose previous features include "The Good Girl" (2002) and "Chuck and Buck" (2000), ramps up the story's farcical qualities a bit too aggressively. (Gustin Nash adapted the screenplay.) But the picture strikes the right balance between being good-natured and sharp-edged. When Nick runs into a classmate at a DVD store and shows her his carefully selected choice, "La Strada," she waits a beat before announcing perkily, "So random!" The moment underscores how out of place Nick is, not just in the world of his fellow teenagers, but in the world of adults. He doesn't care that his contemporaries laugh at his DVD choices. But wouldn't it be nice if he could find a soul mate who didn't?

It's fun to watch Cera as the nerdy, Sinatra-loving underdog, courting the foxy, Belmondo-obsessed Sheeni. But Nick is an unapologetic variation of characters Cera has played before: The commonsensical but uncertain teenage father in "Juno," the nice-guy would-be boyfriend in "Nick and Norah's Infinite Playlist." Cera is a good enough actor to know he needs to bring dashes of variety to these roles: He tweaks each character just enough to keep them from sliding into the abyss of the dull stereotype.

Still, I think many of us have been wondering: What will become of Michael Cera? It's hard to be a sex symbol when you resemble a beatific, unassuming, preadolescent Jesus on a holy card. Cera himself knows what his limitations are. When he appeared on David Letterman the other night, the host wisecracked, "I appreciate your being here -- I know you had to run right over from geography." Cera made a joke of pretending to walk off the set in a huff, but he was a good sport about it. There's nothing for him to do but play the good sport -- the necessity of doing so is written right in the open, searching innocence of his face.

But "Youth in Revolt" suggests, at least, the possibility of something more for Cera. He won't be able to do much about that baby face. But when he's wearing Francois' Eurowardrobe, his gait and his carriage are different. He has more swagger, more attitude -- in fact, he's more successful at getting at the idea of sexiness than even some so-called sexy actors are. (The handsome but chilly Jude Law, as good an actor as he may sometimes be, comes to mind.) Cera may be reaching the end of road as far as playing the eternally sweet, baffled kid goes. His future may lie in his ability to channel his inner shit.