The media has oversold the trend, but "Precious" star Gabourey Sidibe is leading the way 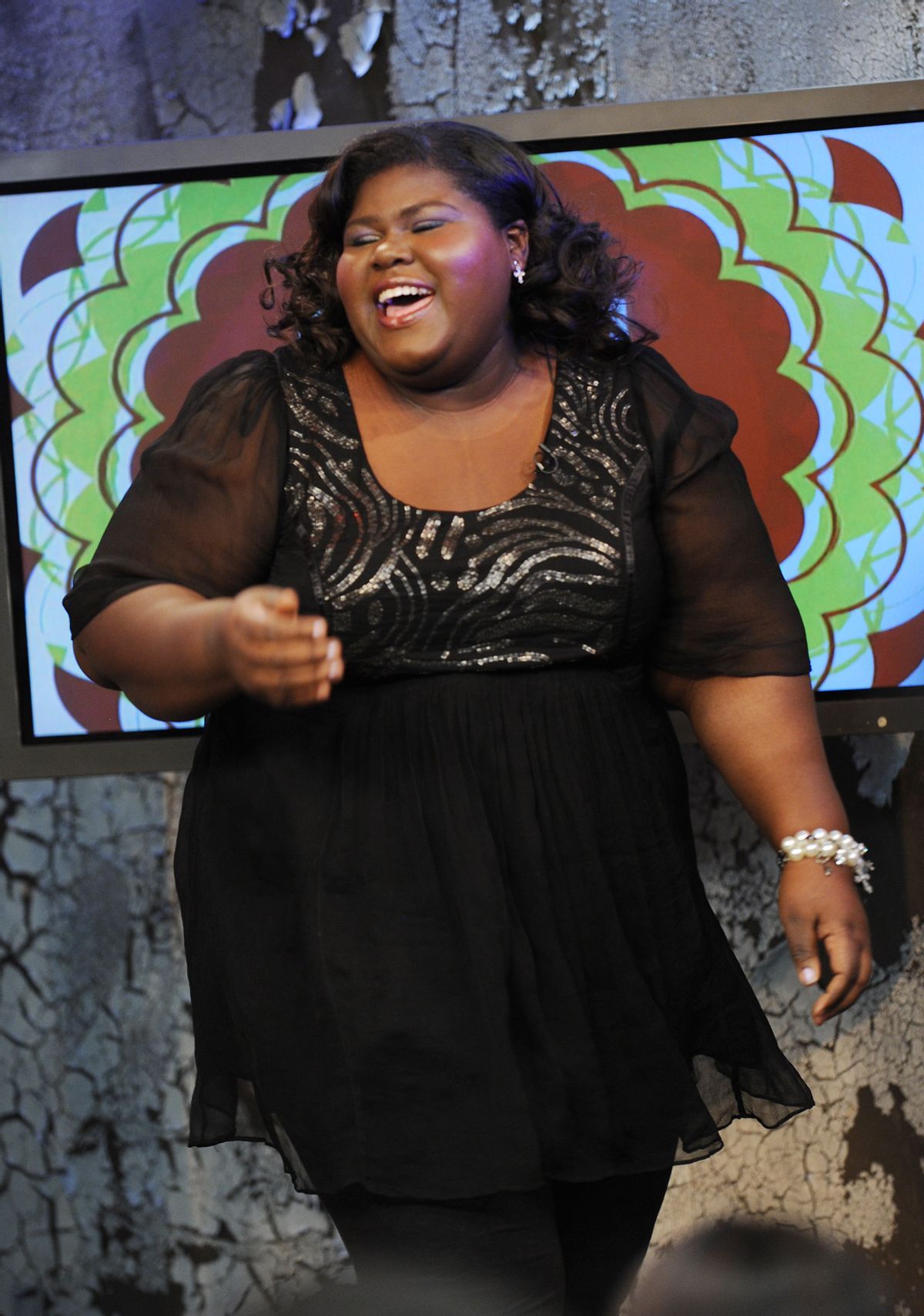 Lately, the media would have us believe that women loving their bodies just as they are is a trend that's about to start sweeping the world as fast as pink eye spreads through a preschool classroom or a salacious rumor through junior high. Glamour's finally started using plus-size models in response to reader demand! Crystal Renn can pull off the same high-fashion looks as a slightly smaller woman! Miss Universe 2004 dares to go un-Photoshopped on a magazine cover! Just look at how real we're getting, all of a sudden. It's a body image revolution, ladies.

Of course, it's a revolution led by uncommonly gorgeous, frequently naked white women who aren't "plus-sized" in any context beyond the fevered imaginations of fashion professionals, but still -- it's a big enough deal that there's already backlash. CNN recently wondered if public health is threatened by the one-two punch of bigger models coming into their own and a few journalists noticing the existence of a more than 40-year-old fat acceptance movement: "Although most people agree that promoting super-skinny models as the feminine (or masculine) ideal isn't healthy, will the opposite -- accepting that being overweight or obese is fine -- undermine the progress being made toward heart health?" (As a friend of mine said, "Wow, how incredibly brave of them to publish this despite all the criticism they'll get from the fat-accepting majority.") Even if the average fat woman has yet to see a marked decrease in discrimination or disgust coming her way, and the average woman of any size remains dissatisfied with her body, I'm assured that the recent glut of size-12 nudie shots portends a sea change.

Let's pause for a little reality check. Prominently featured on Glamour's website at this writing is the headline "Sign Up for Body By Glamour and You Could Lose 5 Pounds This Week!" Further down the page, "How to Dress 10 Pounds Thinner," "When I See a Woman This Skinny, It Just Makes Me Mad," and "10 Ways to Reverse Holiday Weight Gain -- Fast!" This is the ostensible leader in the ostensible trend among women's magazines to promote healthy body image -- apparently, crash dieting and criticizing very thin women will make you like yourself even more? A rash of TV shows featuring larger people last summer was also heralded as evidence that more realistic beauty standards and less body shame are on their way in, but upon closer inspection, as I wrote then, they did "little to dispel the myth that fat people's lives are built around dessert and desperation." While people fretted that new plus-size clothing lines could promote obesity -- because giving young women who can't fit into mainstream sizes the opportunity to dress like their peers might make them forget just how much their bodies are reviled --  several retailers started reducing their offerings above a size 14. Despite a handful of baby steps and dozens of trend pieces inflating their significance, I'm pretty confident that 2009 will not be remembered as The Year of the Happy Fat Chick.

But the surprise hit film "Precious" featured something that truly was a departure from the norm: A genuinely fat, African-American heroine embraced by a far greater audience than anyone expected. Of course, the character's weight was often seen as one more tragic element of her life story -- she's poor, illiterate, abused by both parents and pregnant by her father -- and when it became clear that actress Gabourey Sidibe shared neither that painful history nor that negative view of her own body, the calls for her to be appropriately ashamed of herself began. Wrote Alicia Villarosa at The Root:

According to interviews, including a recent New York magazine, Sidibe is a confident, well-adjusted 25-year-old with a positive body image and no shortage of self-esteem. Readers writing in were overwhelmingly positive... and invariably mentioned her size. One declared, "she's so incredible and so comfortable in her own skin that she's probably lined with mink." GAG!

Villarosa goes on to point out, in case you hadn't noticed, that Sidibe is "SUPER fat," and diagnoses her with "psychological issues" -- specifically, "an emotional disconnect between the mind and body," based on the presumption that the actress is an unhealthy comfort eater. "[I]f we just stick to her acting, kudos. But if we're talking about her size -- which has become part of the conversation -- are people delusional? A five-foot-something woman tipping the scales at over 300 pounds is not something to celebrate."

Ah, are you feeling the love? That body image revolution is just around the corner, I can taste it. But only for a second before I GAG!

One real bright spot in the push-pull between baby steps and backlash, though, is Sidibe herself, who continues to exhibit "no shortage of self-esteem," despite some people's belief that the only logical explanation for that must be pure self-delusion. In a fabulous interview with Harper's Bazaar, she puts paid to that assumption, which even "Precious" director Lee Daniels has reinforced, saying to the New York Times, "[Gabby] may be in a state of denial or on a higher plane than the rest of us, but either way, she breaks your heart in the movie." Says Sidibe, "I was like, 'What the hell? I'm in denial?' No, I know what I look like. I'm very much aware." It's just that she somehow managed to overcome all the cultural messages that train fat women -- especially fat women of color -- to believe they couldn't possibly be attractive to anyone, anywhere, ever.

"It came late, too late in my life," she says of her positive self-image. "I just know that I was tired. I was tired of thinking less of myself because others did... People always ask me, 'You have so much confidence. Where did that come from?' It came from me." Later, after talking about her recent decision to join a gym -- not to lose weight, but to feel better (when she was in the habit of swimming 100 laps a day, she says, she still looked "just like this") -- she adds, "It's a mind game, not a body game."

It's all a mind game, but at least now we have Sidibe out there showing us how to win it. Whenever a fat celebrity attracts attention and acclaim, I gird myself for the seemingly inevitable announcement that she's become the newest Jenny Craig spokesperson, but Sidibe might just be one who never buckles under the pressure to believe that less of her would be more. "I don't have any plans of changing," she says, "because I really, really like myself. It took a lot of work to get here." Even the long-reigning queen of body shame, Oprah Winfrey, is impressed: "It's like she's from another planet, because she's so evolved, so confident, so secure about who she is." But the whole point is, she's not from another planet -- she's just a regular American woman (or was, before "Precious" came along) who got tired of thinking less of herself because others did. So she stopped.

The inspirational value of that not-so-simple action might make Alicia Villarosa gag, but it's out there anyway. Of all the photoshoots she's done lately, Sidibe says, "I feel like a model. It justifies everyone in my life who told me I wouldn't be anything until I lost weight. It justifies that little girl who cried because she didn't think she could be in front of the camera. And it's for other girls who feel like they can't do this or that and feel like they're not pretty and not worthy of having their photo taken." As far as I'm concerned, those words coming from her are worth a thousand naked Crystal Renns.