Amy Adams gets cow poo on her shoes. Then she falls in the mud. What ever happened to the genre's wit and charm? 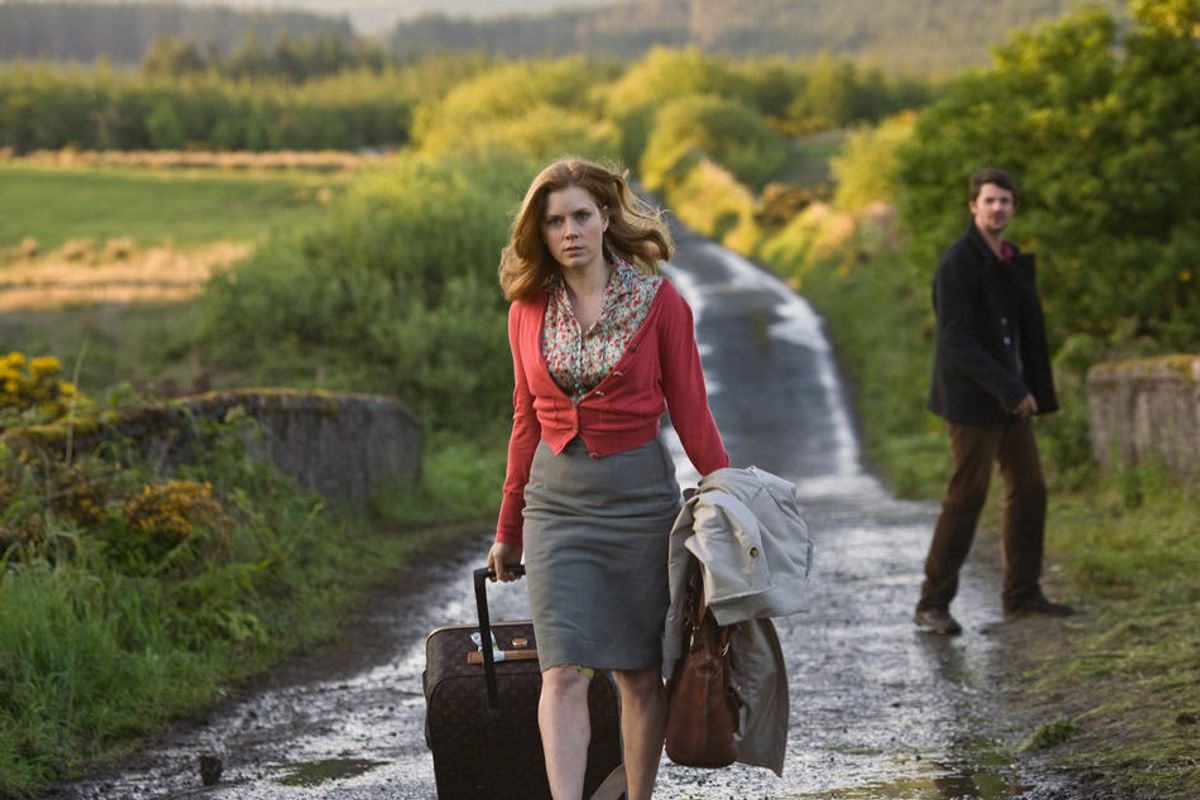 According to ancient Irish folklore, it's perfectly OK for a woman to propose marriage to her guy on Feb. 29. But according to the stink-bomb romantic comedy "Leap Year," the proposal has to be made in Dublin: This bit of plucky leprechaun magic won't work if you're in Chicago or Paris or Dubai, and certainly not if you're in Boston, where the sprightly (if desperate) heroine of "Leap Year" lives. Amy Adams is Anna, a sparkly-eyed professional who works as a "stager" -- that means she adds cute finishing touches (fresh flowers, just-baked cookies) to apartments and homes that are up for sale. Anna and her cardiologist boyfriend, Jeremy (Adam Scott), are in the process of buying a home themselves, a unit in one of Boston's snootiest, swankiest buildings. Anna is sure the engagement ring is soon to follow -- one of her friends has spotted Jeremy toting a bag from the hot designer engagement-ring emporium. Squeeeeal!

But when Jeremy presents Anna with that special little box, she's dismayed to find that it contains only earrings: in other words, not just one massive honker of a diamond, but two of them. What a crap gift! What a crap boyfriend! Noting, craftily, that it's Leap Year and Feb. 29 is quickly approaching, Anna decides to follow Jeremy to -- how lucky! -- Dublin, where he happens to be headed for a medical convention. On the way there, she gets stuck in Dingle, where she meets cute but bitter pub owner Declan (Matthew Goode). He agrees to drive her to Dublin, for a price. Many cow pies and several dead chickens later, Anna will be cured (we hope) of diamond-ring fever and she and Declan will fall in love -- but you knew that was coming, didn't you?

Let's forget, if we can, that "Leap Year" -- which was directed by Anand Tucker and written by Harry Elfont and Deborah Kaplan, the duo who all too recently gave us another horrifying wedding-obsessed romantic comedy "Made of Honor" -- is trying to sell us a heroine who's a marriage-desperate dreamer. That's Anna's big flaw, the obstacle she must overcome for this movie to have any semblance of a plot. What's even harder to forgive is the way Anna is forced to wobble through the Irish countryside in a very pretty but extremely precarious pair of $600 (at one point she makes note of the price) ankle-strap platform shoes. The camera repeatedly lingers on these absurdly unstable shoes: Anna totters around on them, along city streets and through airports, as if perched on baby deer feet. The effect could be defended, I guess, as disgustingly adorable, until these shoes become an unavoidable symbol of how low a bunch of filmmakers are willing to go to humiliate a character: First their spiky heels sink deep into beach sand; then they find their way into thick piles of cow poo. When Anna finally has the good sense to take them off, she slips in the mud and becomes covered, from head to toe, in brown slime.

If you're wondering what all this shoe and mud business has to do with romance, or with comedy, you're not alone. "Leap Year" is clearly designed as a vehicle for the inescapable cuteness of Amy Adams, but it suggests her novelty is wearing thin. Maybe that's because this movie is simply following too closely on the heels of "Julie & Julia," in which Adams was saddled with the role of a whiny cooking blogger (and was too easily upstaged by Meryl Streep, who made a terrific, tootling Julia Child). Regardless, Adams is too pouty and petulant here -- her shtick is more wearying than endearing. And while Goode has shown sparks of promise in a number of roles -- he played a charismatic thug in the Scott Frank thriller "The Lookout" and Colin Firth's lover in Tom Ford's "A Single Man" -- he's treated as an afterthought here. His character is barely fleshed out; he exists only as an accessory for Adams -- this is a case of man as handbag.

Since "Leap Year" was shot on location in Ireland (by cinematographer Newton Thomas Sigel), you might be thinking there's a dim possibility that it might work as a sort of travelogue. You'd be wrong. I've seen Irish Spring commercials that look more radiant. It doesn't help that costume designer Eimer Ni Mhaoldomhnaigh (who has done fine work before, in movies like Neil Jordan's "Breakfast on Pluto") lets Adams down miserably. She has a lovely, curvy figure, but she's been packed too tightly into an assortment of vintagey sexy-secretary outfits that neither flatter her nor -- those $600 shoes aside -- look like anything a career-climbing cutie-pie of her stature would actually wear.

Strangely, or maybe not, the director of "Leap Year" has made some passably interesting movies in the past ("Shop Girl," "Hilary and Jackie"), and he also directed one of the films in the Red Riding Trilogy, a series of crime dramas based on the novels of David Peace. (The series was originally made for British TV, but it will be released theatrically in the States this spring.) Tucker may not have the light touch needed for romantic comedy, though it's hard these days to find anyone who does: It seems the best we can hope for are passably enjoyable Sandra Bullock vehicles like the Anne Fletcher-directed "The Proposal" (as opposed to genuinely dreadful ones like "All About Steve," the stalkerfest directed by Phil Traill). Still, it doesn't take a light touch to recognize that tossing your heroine in the mud is a cheap way to get laughs. If only "Leap Year" were an anomaly, the kind of picture that comes along only once every four years. Instead, it's yet more evidence that romantic comedies are only getting worse. The genre needs a knight in shining armor, fast -- someone who knows that great characters and dialogue, not diamonds, are a girl's best friend.