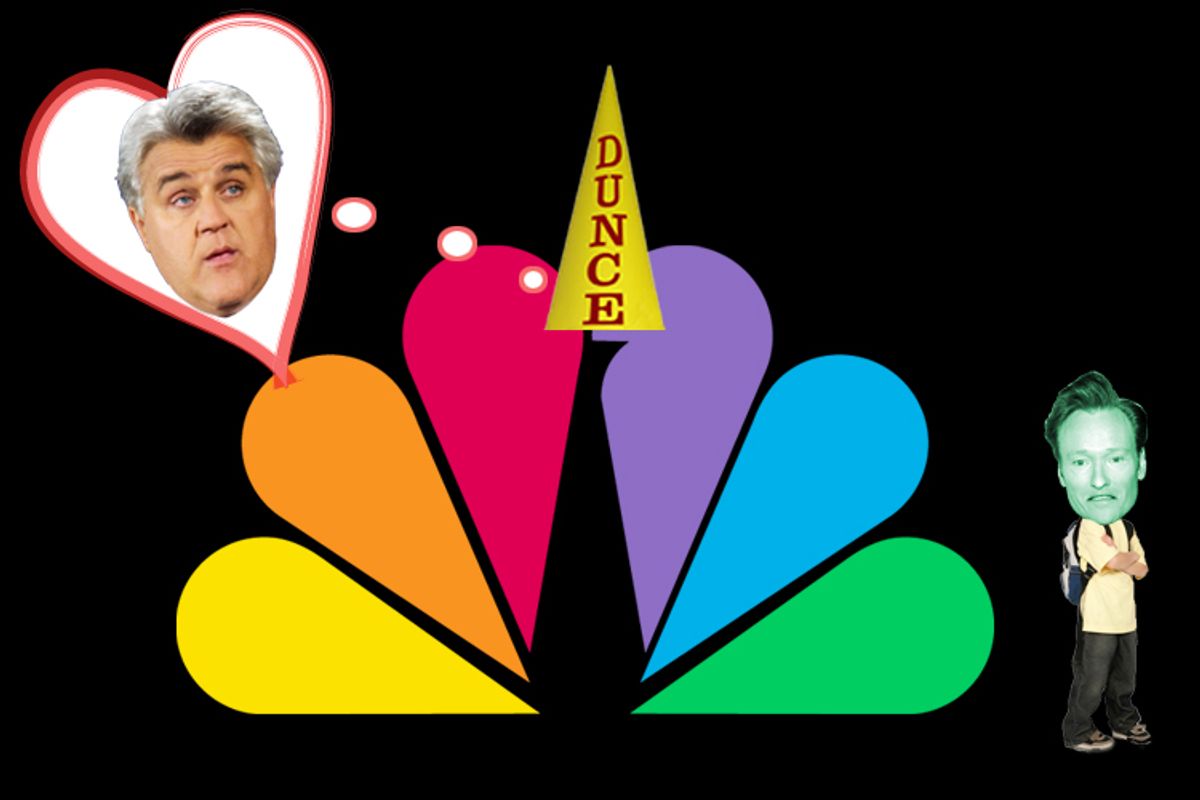 NBC's first New Year's Resolution: Screw things up but good, then say you didn't. What else can explain the talk, halfway through Jay Leno's disastrous first season filling the nightly 10 p.m. slot, about giving Leno back his 11:30 p.m. slot, and booting Conan O'Brien to midnight (where he'll keep the "Late Night" moniker)?

Meanwhile NBC issued an announcement that they "remain committed" to keeping Conan, while the network has spent months pretending that Leno's failed experiment at 10, with ratings lower than almost everything else on TV at that hour, has been a real success.

You know those parents who put their kid on a leash and, while they're bragging about how well it works in a crowd, they yank the leash to make the kid come and instead the kid falls down and cries? You know how those parents try to explain how it really does work while they comfort their kid, then the kid runs away, reaches the end of the leash, falls down again? You know how witnessing the whole thing makes you back away slowly, smiling, but deep inside you feel a little bit depressed?

That's sort of how the world feels about NBC, Leno and Conan right now. NBC is the idiot parents. Conan is the poor kid. Leno? The leash.

It goes without saying that it's not the leash's fault that it's made for dogs, not children. Even so, when the leash gets strapped to little Johnny, that makes the leash look bad, as if it's the leash's idea to treat a kid like a dog.

Similarly, Leno has about as much appeal and flair as a late-night talk show host as your Uncle Richard probably does. Sure, everyone loves Uncle Richard, with his little magic tricks and his bad puns and the way he's always so enthusiastic about dressing up as Santa Claus each Christmas, even when all the kids are teenagers and the whole spectacle just makes them more nervous and zitty than usual. If someone gave Uncle Richard his own talk show, Uncle Richard would probably take it. "Why not?" he'd say, smiling and shrugging (classic Uncle Dick). Then everyone would hate him. Would that be fair?

No one enjoys hating Jay Leno. Don't blame the leash. It's the parents who are the real dummies in this picture. NBC has mismanaged this situation from the very start: Giving Leno the 10 p.m. slot every single night was a terrible idea, widely proclaimed so. Not only did NBC sally forth, but they tolerated how awful the show turned out to be, even for Leno. They allowed his terrible show on the air. Not surprisingly, most people hated it, even many loyal Leno fans. Few tuned in. But through it all, what did NBC do? They arrogantly proclaimed that they didn't need the DVR crowd, and added that Leno didn't need to get good ratings to be a smashing success because the show was dirt cheap to produce.

People, please. Stay behind the damn curtain. Audiences don't want to know your terrible money-saving plans any more than random people on the street want to witness the really dumb parenting shortcuts employed by lazy parents.

Even so, just as really dumb parenting maneuvers are sometimes whipped out by otherwise reasonably good parents, it would be unfair to suggest that the Leno/Conan debacle paints an accurate picture of NBC's general capabilities and talents. The network has proven itself capable of nurturing great shows: "30 Rock," "The Office," "Parks and Recreation," "Friends," "Seinfeld," "The West Wing." Historically, NBC has made smart, bold choices that were based on talent, not budgetary concerns or shortcuts, and were given time to catch on. Yes, there will always be "The Biggest Loser" and the like, shows that are bad but still pull in great ratings. But you don't build a network around pap. Even Fox, despite appearances, still shops for quality in its prime-time lineup.

"The rules are changing, we're desperate, we don't know how we're going to turn a healthy profit anymore!" NBC and the other networks tell us. Yes, we know. And toddlers are super hard to keep track of in a crowd. But use your heads. Try a little harder. Don't get lazy and then congratulate yourselves for being groundbreaking geniuses, then reverse course midstream, bullshitting all the while ("We love Leno! We love Conan! We love the smell of napalm in the morning!") because the whole mess makes us want to back away slowly, smiling, and never come back. It's just too depressing.

So what should Conan do? Slip off that leash, and make a run for it while you still can.