Not playing in a theater near you: "The Marine 2"

"Die Hard" meets Naomi Klein in a wrestling-infused sequel -- it's not nearly as bad as you'd think! 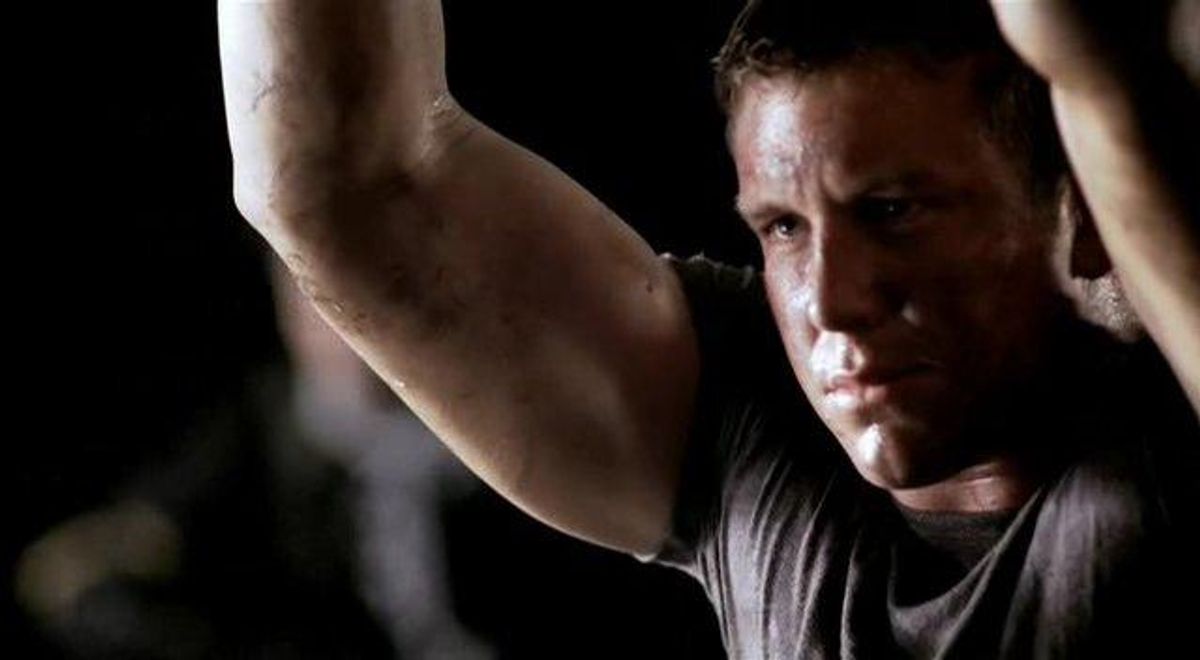 "The Marine 2," which is being stocked on the shelves of a Best Buy near you even as we speak, is the latest jackknife power bomb in Vince McMahon's drive to make his World Wrestling Entertainment (WWE) into a legit multimedia company that delivers action both in the ring and on the screen. You cineastes may be tempted to snicker, but remember that the WWE has already transformed Dwayne "The Rock" Johnson from a wrestling champ into a near A-lister who plays the Tooth Fairy in Disney family comedies. In Hollywood and the squared circle, anything is possible.

"The Marine 2" already pulls off a near impossibility in being the first straight-to-DVD sequel that's better than the theatrically released original. The first "Marine" (2006), which sported the insanely huge John Cena grunting and groaning his way through car crashes and CGI explosions, was a PG-13 affair that watered down the brutality in a bid to make nonstop violence more family friendly. "The Marine 2," on the other hand, goes for broke with an R rating, since there's little to stop tweens from slipping a copy into the basket at Target when their moms aren't looking.

This time around instead of Cena as John Triton we have Ted DiBiase Jr. (his father was an '80s wrestler dubbed "The Million Dollar Man") as Joe Linwood, a Force Recon sniper who watched a young boy get killed in the crossfire during his last mission. While on leave, his wife (Lara Cox) convinces him to attend the grand opening of an exclusive Southeast Asian seaside resort owned by her boss (Robert Coleby), a billionaire motivational guru with shifting accents who wants to surround his pristine beaches with electrical fences to keep the local kids away. Thankfully, it's not long before said beaches are stormed by tribal mask-wearing, machine-gun toting insurgents who must have read Naomi Klein's "The Shock Doctrine" and are really pissed off about it. Our marine gets away after taking out a few bad guys with body slams, but his wife, her boss and a buffet line's worth of high-income partygoers are taken hostage and held for ransom.

This is the same setup from the previous "Marine" and the WWE's 2009 John Cena epic, "12 Rounds." It's also the plot of any number of "Die Hard" movies or "Taken" with Liam Neeson. This hardly matters. We don't need originality. It will only confuse us as DiBiase goes it alone through several slow-motion fight scenes and cataclysmic pyrotechnics to free the hostages before they are decapitated live via iPhone.

As a screen actor (as opposed to a "sports entertainer"), DiBiase's first effort is a valiant one. He's not nearly as wooden as the Rock was in his first starring vehicle, "The Scorpion King" (2002). While his acting needs a little more mat time, DiBiase's wrestling experience gives him the ability to do his own stunts during extended takes, a skill that will only become more valuable as high-def makes stunt doubles more obvious. One fight sequence pits DiBiase's clothesline takedowns against two quick Muay Thai kickboxers in a series of hard moves that's as satisfying as anything in an "Ong Bak" film. As long as DiBiase sticks to roles where his massive trapezius muscles aren't out of place, he is well on his way to the same level of cult action star status as Jason Statham ("Crank") or Michael Jai White ("Black Dynamite").

Dutch director Roel Reine, a straight-to-DVD specialist who has given us a recent Steven Seagal flick, keeps the pacing quick but isn't afraid to give us an interesting shot here and there. As the rebel leader, Temuera Morrison is much more menacing here than he was as Boba Fett's dad in two "Star Wars" prequels (although he could have been a tad more sympathetic in order to assuage my p.c. sensibilities).

If you enjoyed "Die Hard 4" or "Rambo" and remain unashamed, "The Marine 2" will bring no dishonor to your Netflix queue. Martial arts fans will also want to see the outtake reel in the DVD extras. As long as WWE Films produces action flicks of this quality, they have a shot at cornering the home theater market for such guilty pleasures at a time when multiplexes prefer to screen "Avatar"-scale spectacles.