"Big Love" and the exquisite perils of family

Three smart, stubborn wives swim against the tide. But is Bill Henrickson strong enough to be their man? 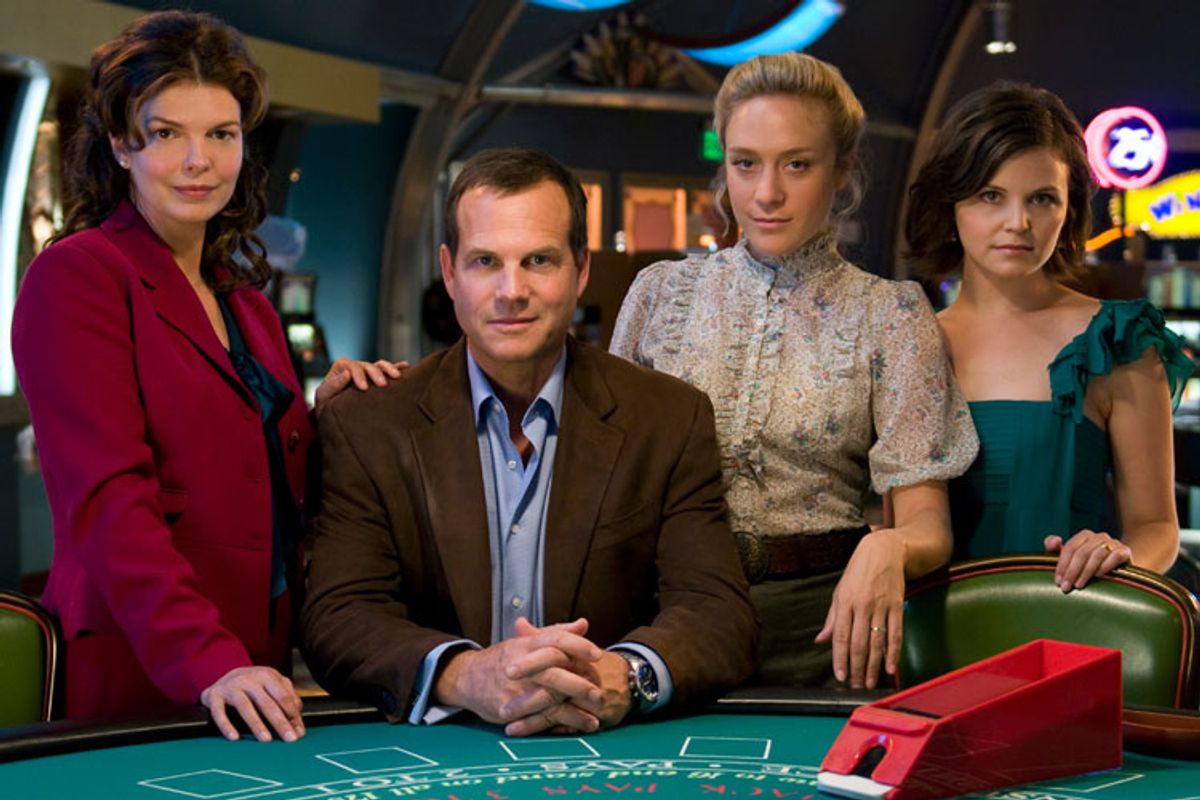 Trying to translate signs from God can be extremely difficult. Did that telemarketer ask "What's your plan?" because God wants you to have a plan, or does God just want you to refinance your home mortgage? Did the drive-through cashier ask "Will that be all?" because God thinks you're a natural-born leader whose work on this earth isn't nearly completed, or is God just saying you deserve fries and a chocolate shake with that hamburger?

Are you bathed in a glowing light because it's time for you to lead your flock to the promised land, or because it's time to see an optometrist? Do you feel something violent and powerful moving inside you because God has chosen you as His prophet, or because you really shouldn't have had those fries and that chocolate shake after all?

Now you have a taste of the challenges that Bill Henrickson (Bill Paxton) finds himself grappling with as "Big Love" (premieres 9 p.m. Sunday, Jan. 10, on HBO) returns for its fourth season. Like any irritatingly self-important patriarch worth his salt, Bill has spent his whole life haunted by the suspicion that he is being called to some higher purpose. But what is that higher purpose? Does the Lord merely want him to expand his chain of home improvement stores, thereby bringing a low-cost source of patio furniture and garage-door openers to the people of Utah? Does the Lord want Bill to prosper by collaborating with his Native American brothers on his new casino venture? Or is Bill meant to step into the shoes of fallen profit Roman Grant (Harry Dean Stanton) and take over Juniper Creek compound, as some of his flock have so boldly suggested?

Like a recent college graduate who's sure that his grandfather died and left him the exact cost of the first year of tuition at NYU film school so he could become the next Federico Fellini, Bill's self-seriousness surrounding his destiny can be more than a little chafing. While his three wives haggle over childcare, errands and countless other pragmatic and pressing concerns, Bill is left to muse endlessly over what God wants for him. After stuttering and stammering and pacing in a self-involved state for days, Bill inevitably concludes that God would like him to pursue some well-nigh impossible goal that requires the active commitment and participation of everyone in his family. That's a little bit like calling your parents and asking them to sell their house so you can stay in film school and pursue your true calling of learning to make art that costs hundreds of thousands of dollars a shot.

Honestly, why don't Barb (Jeanne Tripplehorn), Nicolette (Chloë Sevigny) and Margene (Ginnifer Goodwin) join forces and find a more suitable husband to share? Three babes like that should be able to attract a wide assortment of reasonably handsome and successful prospects, shouldn't they? After years of tolerating Bill's self-obsession and unfocused longing, after putting up with his recklessness and out-of-touch maneuvering, after supporting his grandiose schemes in the name of commitment, isn't it time for these three ladies to dump this bland little man and move on once and for all?

Nicki, at least, is having second thoughts. Although her romantic connection with prosecutor Ray (Chip Esten) ended abruptly last season when he figured out that she was a) lying, b) married, c) creepy as hell and, oh yeah, d) the daughter of the man he was attempting to prosecute, Nicki isn't completely over Ray. Not surprisingly, she's not all that into Bill right now, either. In typical Henrickson three-ring circus fashion, Barb grills Bill about whether or not he and Nicki are sleeping together again, Nicki overhears them talking and becomes angry, then Margene blurts out at a meeting between the wives that Nicki and Bill need to find their lost spark again. "I'm so glad my intimate relationship with Bill is such a fascinating topic of conversation between the three of you," Nicki stammers, but her defensiveness is, as usual, just a coverup -- in this case, a way to hide her lingering feelings for Ray and her ambivalence toward Bill.

Barb best exemplifies the toll Bill's flights of fancy have taken, with her world-weary, exhausted expressions and her deep sighs and the way she tries to corral these younger, more volatile wives for the sake of the family. Poor Barb. Bad enough to be saddled with her lily-white prophet husband, but then she's got to back his plays with her kids, her sister-wives, their kids? Why shouldn't Barb take over the whole production, step up and become the next prophet, run for office, or all of the above, leaving Bill to do what he does best, namely, mumbling and second-guessing himself in the background?

This points to what I see as a recurring flaw of "Big Love." On a scene-by-scene basis, this is a truly great show. Great actors working with a great script and bringing these really beautiful, thoughtful exchanges alive. When Sarah (Amanda Seyfried) finally confronts her mother about her marriage plans or Margene tries to give Bill advice in bed or Barb attempts to turn over a new leaf with her mother or sister, those scenes are rich with the complex layers of love and resentment that make up any family. But the big picture of "Big Love," the overarching narrative, is weaker than these scenes would suggest. Whether or not Roman Grant falls, whether or not Lois (Grace Zabriskie) and Frank (Bruce Dern) succeed in killing each other, whether or not the casino is successful -- these big plot points should feel more essential to the story. We should feel more invested in the outcome.

Part of the reason that we're not as invested as we should be, in my opinion, is that Bill Henrickson never really outperforms. Even without Roman in the picture, Bill is fighting against prejudice, discrimination, the hypocrisy of the Mormon church, but he's doing so without much strategic prowess or cleverness or any coherent plan. Every time Bill comes up with a plan, in fact, it's no surprise that everyone is underwhelmed. His plans aren't thoughtful or solid, and he never shocks us with his savvy or his wisdom.

I guess what I'm saying is that sometimes, I want a little more Patty Hewes or Vic Mackey in my Bill Henrickson. And when I say that, I don't only mean that I want Bill to be more charismatic or underhanded, that I want him to be less earnest and less bumbling. I really don't want him to be unrealistically magical or strategically gifted. I just want him to have some strategy that doesn't backfire immediately and bring holy hellfire and damnation upon his family over and over again. Bill and the family need to come up with a crafty plan and win for once, not just by making money, but by gaining the acceptance, at least at some level, that they're all craving.

On the other hand, I'd be satisfied with seeing the family fall apart completely -- and maybe that's the real point of this series, in the end. If you have a family full of healthy, strong individuals, if half of the members of the family aren't just subordinates, supporting characters who ensure the survival of the other half, if everyone is allowed to reach their full potential, can the family survive? Barb has had plenty of doubts about her role, Nicki is more conflicted than ever, and now even Margene, the most cheerfully submissive wife, is striking out on her own and might end up fighting for more independence. Maybe Ana's departure foreshadowed the essential impossibility of this sort of family structure lasting over the long haul.

And this is where "Big Love" really succeeds: By demonstrating the challenges of holding together an elaborate, unwieldy group of individuals, the drama presents an exaggerated portrayal of the very fragile nature of the nuclear family. Does the family only function smoothly when some members' needs are subordinated for the greater good? Are family members asked to bring one or two helpful traits or qualities to the table (cheerful Margene! Handy, no-nonsense Nicki! Motherly Barb!) while shelving other qualities that don't serve the group as well (charismatic Margene, stubborn, idealistic Nicki, and smart, strong Barb)?

Unless the family unit can evolve and become flexible enough to allow room for each member to grow and feel fulfilled, then family ties start to feel more restrictive and binding, like something that needs to be thrown aside rather than cherished.

At its best, "Big Love" unearths the essential challenges of family and forces its audience to confront our own mixed feelings about our most intimate and oppressive relationships. By the end of the second episode, even as the Henricksons struggle mightily to accommodate Sarah's need for separation from a culture that she views as oppressive and twisted, Sarah herself demonstrates at least partial acquiescence in the very last scene of the episode. Or is she just offering a conciliatory gesture that signals her impending split with the family? The swelling chords of Passion Pit's "Moth's Wings" that end the scene underscore the confusion at the heart of the Henricksons' plight:

Whose side are you on?

What side is this anyway?

Put down your sword and crown

Come lay with me on the ground.

Sarah may put down her sword and crown, but Bill Henrickson isn't about to do the same. He has been called to a higher purpose by God Himself. The question is, are we with him, or are we against him?