A Democrat's gaffe, the GOP's shame

Harry Reid chose his words poorly, but equating it with saying a racist would have made a good president is idiocy 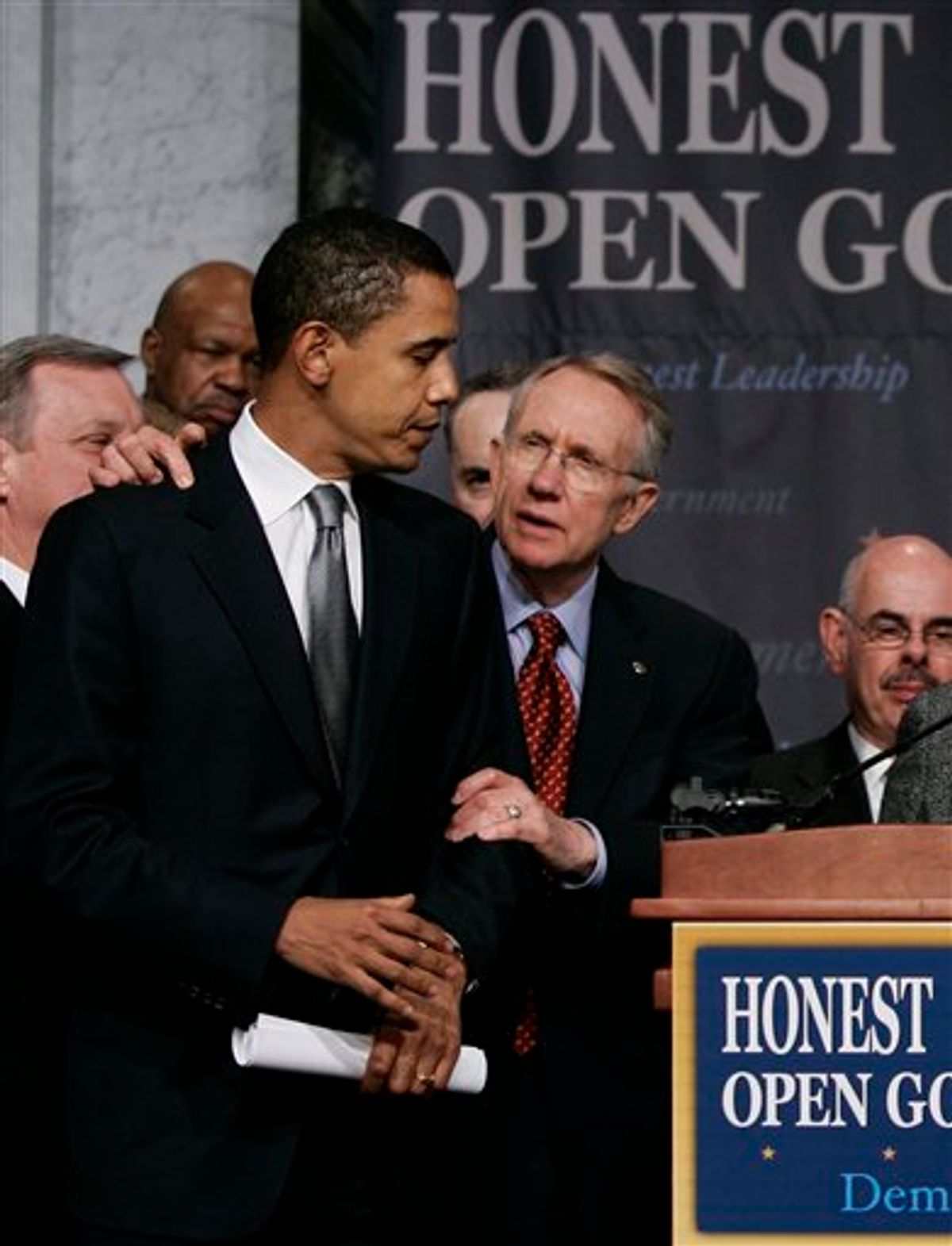 FILE - In this Jan. 18, 2006, file photo Senate Democratic Leader Harry Reid of Nev., center, joined by Sen. Barack Obama, D-Ill., left, prepares to outline the Democrat agenda for reform in the wake of the scandal involving former lobbyist Jack Abramoff, at the Library of Congress in Washington. Reid apologized Saturday, Jan. 9, 2010, to President Barack Obama for comments he made about Obama's race during the 2008 presidential bid, which are quoted in a yet-to-be-released book about the campaign titled "Game Change". (AP Photo/J. Scott Applewhite, File) (AP)
--

Sure, it's depressing that Democrats have a Senate majority leader who thinks it's acceptable to use the term "Negro dialect," even in private, off-the-record conversation. It's not just that the term "Negro" was retired about 40 years ago; it's also the notion that there is any one "dialect" spoken by Americans of African descent.

But 70-year-old Harry Reid's gaffe -- he immediately apologized once it was revealed in John Heilemann and Mark Halperin's gossipy "Game Change," and Obama warmly accepted the apology -- has attained near-scandal proportion, pumped up by the right, the shallow MSM as well as a little bit too much debate among Democrats. I dug myself into a hole on this question on Twitter; it can't be debated in 140 characters, so let me try to dig out -- or dig deeper -- with a little more room here.

First of all, I'll share what Reid is quoted as saying. Tangent: I think Heileman and Halperin have probably written an absorbing book (the John Edwards chapter is amazing, and stomach-turning), but if they get dinged for anything, it will be for using a lot of unnamed sources, as well as quoting controversial statements, sometimes firsthand, sometimes with less direct knowledge, in odd sentence fragments. Here's the Reid section:

"[Reid's] encouragement of Obama was unequivocal. He was wowed by Obama's oratorical gifts and believed that the country was ready to embrace a black presidential candidate, especially one such as Obama -- a "light-skinned" African American "with no Negro dialect, unless he wanted to have one," as he said privately. Reid was convinced, in fact, that Obama's race would help him more than hurt him in a bid for the Democratic nomination."

It does feel a little silly to be debating objectionable sentence fragments, although a fuller quote of Reid's remarks might get him in deeper, but there we are.

For Republicans to jump on Reid is both predictable and disgusting. The foolish Michael "Honest Injun" Steele is suggesting that Reid must resign. I think Steele funneled his own book fee to Harper to get them to release "Game Change" this weekend, so the Sunday shows wouldn't be obsessing over whether and when Steele will resign or be pushed out of his post as RNC chair, for gaffing and overspending his way to shame.

I'm glad to know Steele doesn't believe there is any kind of black dialect. I guess that's why he titled his blog "What up?," told the "Today" show in no uncertain terms "brotha's still here" and said the Republican Party had to use hip-hop to reach black voters. No stereotyping there!

Meanwhile, Steele and Arizona Sen. Jon Kyl are shrieking "double standard," comparing Reid's comments to the stunning 2002 musings of former Senate Majority Leader Trent Lott, who had to resign after he said the country would have been better off if it had elected Dixiecrat segregationist Strom Thurmond president in 1948. Oh sure: One guy is talking, perhaps inelegantly, about why he's wholeheartedly supporting our first black president; the other is wishing the country had elected a racist. That's exactly the same thing!

But I was a little bit bothered to jump on Twitter today, where my world is very liberal and colorful, and hear some Democrats still trashing Reid for his misstatement. You can read the whole thread here. One person suggested that Reid had no business discussing the issue of whether being light-skinned is an advantage for African-Americans, when that issue is in fact regularly debated in the black community. If we're ever going to have our long-delayed conversation about race, white people are going to have to be able to participate even on issues that black people have considered their own. I can't count the number of conversations I had in 2008, with savvy political observers of every race, talking about the advantages of Obama being light-skinned and biracial.

Seriously, does anyone really think it's coincidence that our first black president is a biracial man who came from Hawaii by way of Harvard  (with a little political rough and tumble in Chicago)? If my thinking that means I can't be Senate majority leader ... well, that's OK. I didn't want that job anyway.

Others took issue with the notion of a "Negro dialect," and while the term "Negro" is passé and the idea that there's one dialect spoken by all African-Americans is ridiculous, it's also silly to suggest that there are no words, idioms, sayings or speech patterns common to some or even many African-Americans. During the 1980s, I covered the efforts of some black educators in Oakland, Calif., to get Ebonics designated a language so low-income African-American kids could get English as a second language funding. During the 2008 campaign people noted that not only Obama but Hillary Clinton (with, um, maybe less justification) sounded quite different speaking before black audiences and white ones. Obama is culturally bilingual, and again, if we're supposed to deny that was an advantage for him, we're being willfully blind to the realities of politics.

Having a black president means that issues that some black people think can only be discussed in their community are going to come out in the open. For better, or worse, and in this case, I think better. Harry Reid expressed his thoughts inelegantly, he understands that now, and perhaps we'll retire the term, and the idea of, "Negro dialect." But if progressive racial-justice Democrats don't think politicians of every race size up the field in terms of competitive advantage -- and sadly, even today, accord advantage to African-Americans who put white folks at ease, speak "white" or "standard" English, and even, yes, look "less non-white" -- we're kidding ourselves.

Besides: We have much bigger problems, as a party and as a nation, than the reasons a powerful 70-year-old white politician endorsed Barack Obama for president. Let's get serious here.