A dead end for progressives

Crusading against the Senate filibuster as "unconstitutional" can harm, not help, liberal causes 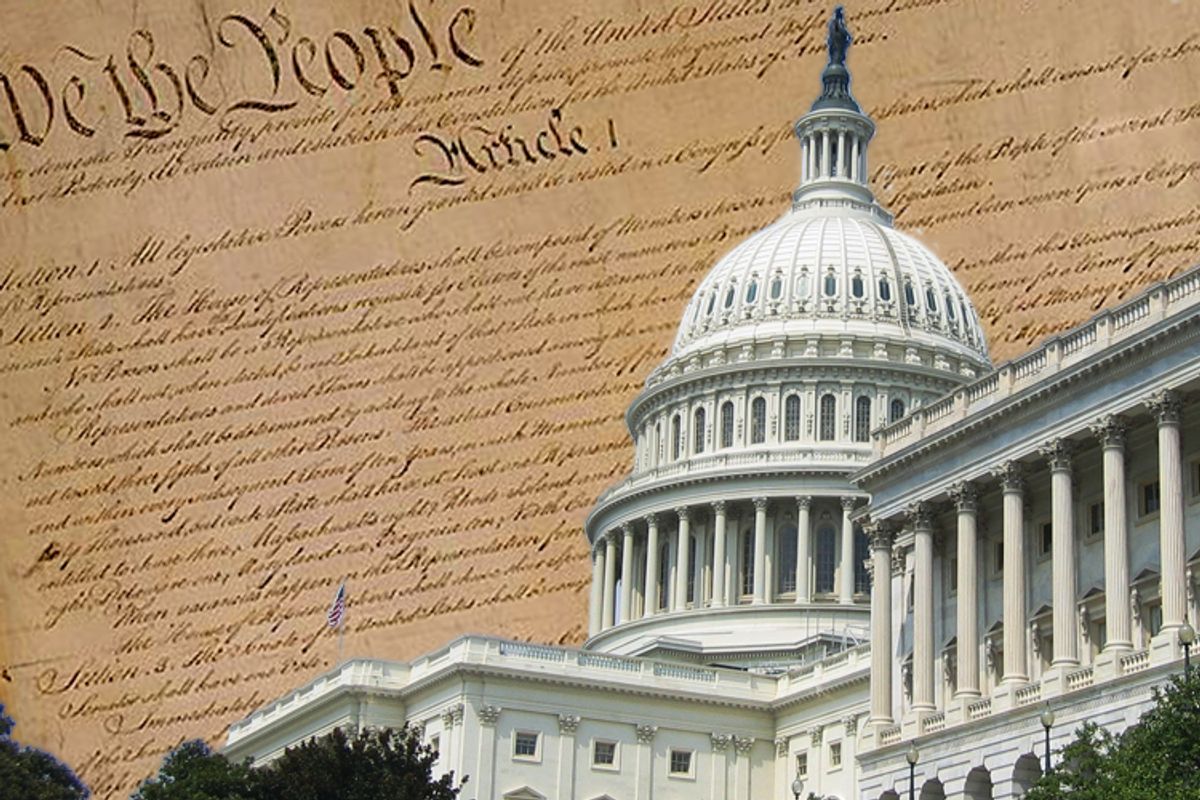 The Senate filibuster, as abused by the Republican minority, is a bad idea gone wrong. By allowing any senator to block a vote unless 60 senators vote to proceed, the filibuster rule permits senators representing a small minority of the population to block or delay measures that have overwhelming popular support.

But is it unconstitutional? Though the Constitution is silent, progressive icon Thomas Geoghegan thinks so. In a New York Times Op-Ed Monday, he argues that the filibuster is “at worst unconstitutional and, at best, at odds with the founders’ intent.”

I yield to no one in my admiration for Tom Geoghegan. His career as a labor lawyer and progressive writer leaves me in awe. I gave money to his ill-fated House campaign. For a brief period last year, he and I were part of a litigation team trying to prevent the dubiously Honorable Roland Burriss from squatting in Barack Obama’s old Senate seat for the remainder of Obama’s term.

But even Jove nods. Geoghegan’s arguments aren’t just flawed -- they are actually harmful to the cause of progressive constitutionalism. They may impel progressives to squander their energies on a constitutional crusade that will make them look hypocritical and ridiculous. Even worse, they may help legitimize the constitutional techniques that the right has devised to get its political way. Many of the same arguments were used during the Republican era of dominance to threaten the Democrats’ use of the filibuster to block Bush’s worst nominations. That dispute was settled by negotiation and deliberation -- which the founders clearly did intend -- instead of by spurious arguments about “original intent.”

The right has poisoned constitutional debate by advancing ridiculous claims -- that, say, the vice-president isn’t part of the executive branch, or that the president may ignore the Foreign Intelligence Surveillance Act -- and getting them taken seriously by claiming they are “clearly” part of the Framers’ “intent.”

In fact, the chief usefulness of Geoghegan’s piece may be to serve as a compendium of wrong ways to interpret the Constitution. Here’s a list of those techniques:

1. Ignore the clear text and overinterpret the unclear text. Article I of the Constitution says “Each house may determine the rules of its proceedings.” Pretty clear? Geoghegan insists that this language is trumped by such provisions as Article I, § 5, which states that “a majority of each [house] shall constitute a majority to do business.” This is the kind of strained parsing the Supreme Court has used to limit Congress’s power to enforce civil rights. The 14th Amendment says that Congress can enforce its provisions by appropriate legislation. Chief Justice Rehnquist pioneered the argument that this section granting power was actually “intended” to limit Congress to doing what the Court considers “appropriate.”

2. Invoke a general sense of what the founders must have thought to trump what they actually said. “The founders ... were dead set against supermajorities as a general rule,” Geoghegan writes -- therefore they must have secretly opposed the practice of filibustering, even though they didn’t say so. The Rehnquist Court used the “the background principle of state sovereign immunity embodied in the Eleventh Amendment” to block federal lawsuits against states under such laws as the Americans With Disabilities Act. “State sovereign immunity” appears nowhere in the Constitution, but conservatives “know” the Framers liked it.

3. Recharacterize the question. The right uses this all the time -- remember that conservatives Ronald W. Rotunda and J. Peter Pham recently charged that Obama’s Nobel Prize is not a national honor but “an emolument, and a foreign one to boot,” thus barred under the Constitution. In Geoghegan’s analysis, the filibuster isn’t a rule of procedure governing debate -- it is an issue of the vice-president’s prerogatives. The vice-president is to vote when the Senate is “equally divided,” he notes. But with the 60-vote requirement to cut off debate, an “equally divided” Senate won’t vote. “The Senate is never ‘equally divided’ on the big, contested issues of the day,” he argues. This is a clever substitution -- but it’s textual nonsense (if the Senate doesn’t hold a vote under its rules, it’s not “equally divided”) and not even true. In 1993, Al Gore cast a tie-breaking vote to enact the first Clinton budget, for example. In all, Gore cast four such votes -- and Cheney cast eight.

4. Interpret the Constitution like a statute. Because the founders included some supermajority provisions, Geoghegan argues, there can’t be any others. “The founders knew and operated under the maxim ‘expressio unius est exclusio alterius’ -- the express mention of one thing excludes all others.” This Latin wheeze is nearly obsolete as a rule of statutory interpretation; as a constitutional principle, it would be a disaster. The Framers left many things out of the Constitution -- some because they wanted the government to work them out, and some because they just didn’t think of it. The president’s power to remove Cabinet members is never mentioned; some early leaders argued that meant the Cabinet had to serve for life. Designating a flag is not a listed power of Congress. Is the American flag unconstitutional? Healthcare’s not in the Constitution either. “We must not forget that it is a Constitution we are expounding,” Chief Justice Marshall wrote in McCulloch v. Maryland. Progressives in particular should pay attention to this rule.

5. Treat “The Federalist” as a dispositive source of meaning. Geoghegan says the authors of "The Federalist" defended constitutional supermajorities “with an obvious sense of guilt.” So we should imagine that they really opposed them, even though they pretended to be writing to affirm them. "The Federalist" is a brilliant book, but it’s not a source of law. One of its authors, Alexander Hamilton, barely attended the sessions in Philadelphia. Another, John Jay, was not even a delegate. Conservative justices have used conjectures about "The Federalist" to invalidate parts of the Brady Handgun Act and to support state-imposed term limits on Congress. Like Tocqueville’s "Democracy in America," "The Federalist" can be tortured to mean whatever we want it to.

6. Finally, and most pernicious, invite the Supreme Court to take the decision away from the political system. “We needn’t rule out the possibility of a Supreme Court case,” Geoghegan writes. Oh, please, please, Tom, please can we agree to rule that out? Do we really want the current Supreme Court deciding when and how a Democratic Senate can vote? Look what an impartial job they did picking the president. Progressives’ motto, for the next few years, should be the one Dickens coined about the Victorian Court of Chancery: “Suffer any wrong that can be done you, rather than come here!”

Geoghegan has some good suggestions -- a resolution by the House denouncing the filibuster and united political action to support candidates who will vote for reforms. But the right way to reform the filibuster is political, not constitutional. The Senate has changed its rules before -- until 1975, a cloture vote required 66, not 60, votes. The Senate can enact new rule changes. Obviously it would be hard to do, but it can be done.

For a generation, the right has been arguing that any reform it opposes is unconstitutional. They’ve had great success limiting the national agenda in the name of a will-o’-the-wisp called “original intent” or “original understanding.”

The true “original intent” of the Framers is indicated by what they wrote. On a few questions, there are hard and fast rules. Aside from that, we are supposed to work things out. The way to win on progressive issues is to get down into the trenches and win votes. We shouldn’t fog our national debate with strained constitutional claims.

Garrett Epps is professor of law at the University of Baltimore and a former reporter for the Washington Post.