Liz Cheney owes her prominence as a TV talking head to her daddy. But nepotism can be dangerous as well as annoying 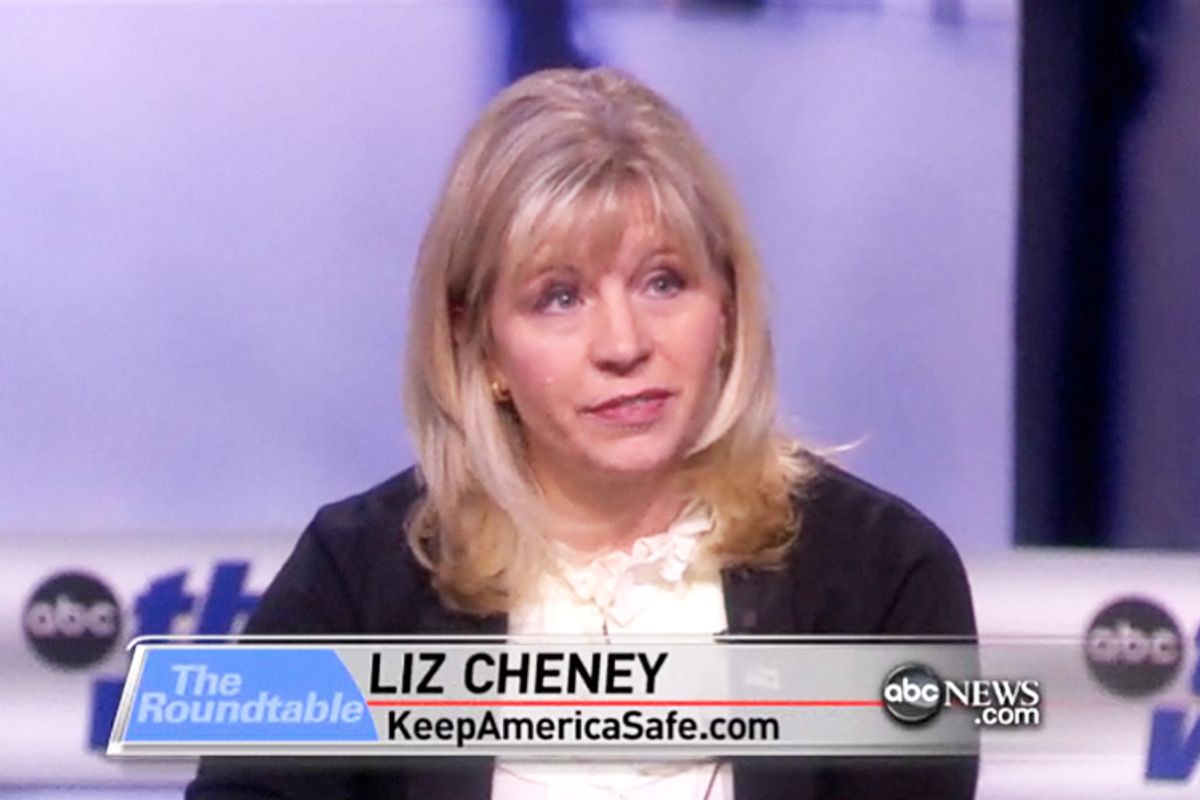 On paper at least, Liz Cheney is more than just the privileged daughter of a former vice-president, bristling with hostile remarks about the Obama administration, the president’s patriotism, and all the terrible perils we face because her father is no longer in control of our national defenses. She advertises herself as a “specialist in Mideast policy,” a term that implies some vague expertise in counterterrorism. What she usually delivers are crude, propagandistic pronouncements like this cheesy attack ad, titled "100 Hours." Reinforced by lurid music and graphics, its chief message is that President Obama played a few rounds of golf over the Christmas holiday -- and spent a few days finding out what happened with Flight 253 before commenting publicly on the incident.

Serving as a board member of Keep America Safe, the neoconservative propaganda organ responsible for that ad, Cheney is also a Fox News commentator and a regular guest on many other outlets. In those roles she has usually escaped tough questions, but there are some signs of weariness with her vacuous bluster.

When she appeared on "ABC News This Week" to discuss the 100 Hours ad, George Stephanopoulos quickly pointed out that George W. Bush didn’t speak publicly about shoe-bomber Richard Reid until six days after he attempted to bring down Flight 253. (Stephanopoulos might also have noted that Cheney and her friends never seemed to notice how often Bush left the White House on vacation -- especially during the weeks before 9/11, when the warning system was flashing red-red-red and steam was shooting from Richard Clarke’s ears.) Then Andrew Sullivan wondered aloud why the mainstream media lavish so much attention and airtime on someone whose public prominence is rooted solely in nepotism. A very good question, even though Sullivan is about eight years too late in asking.

But whenever Liz Cheney (or her dad) complain that nobody except them takes terrorism seriously, I think about her husband, Philip Perry, and the Washington Monthly’s remarkable July 2007 investigation of how he protected the chemical industry from any federal effort to secure their manufacturing plants -- huge and enormously toxic -- from a terror attack. (Real experts have long agreed that chemical manufacturing complexes, many of them abutting metropolitan population centers, present exceptionally tempting and insecure targets for al-Qaida.)

Strictly a patronage appointee like his wife, Perry is a Republican attorney who has spun his government appointments at the Office of Management and Budget and the Department of Homeland Security into gold at the Latham & Watkins lobby shop -- where he chairs the Homeland Security practice group, representing the same contractors and corporations he failed to regulate. This is simply the usual revolving-door Republicanism, except that in a period of actual danger, Perry did lasting damage to the nation’s security. Listening to Liz and Dick is irritating, but America is safer with the Cheney family (and cronies) on TV and out of government.