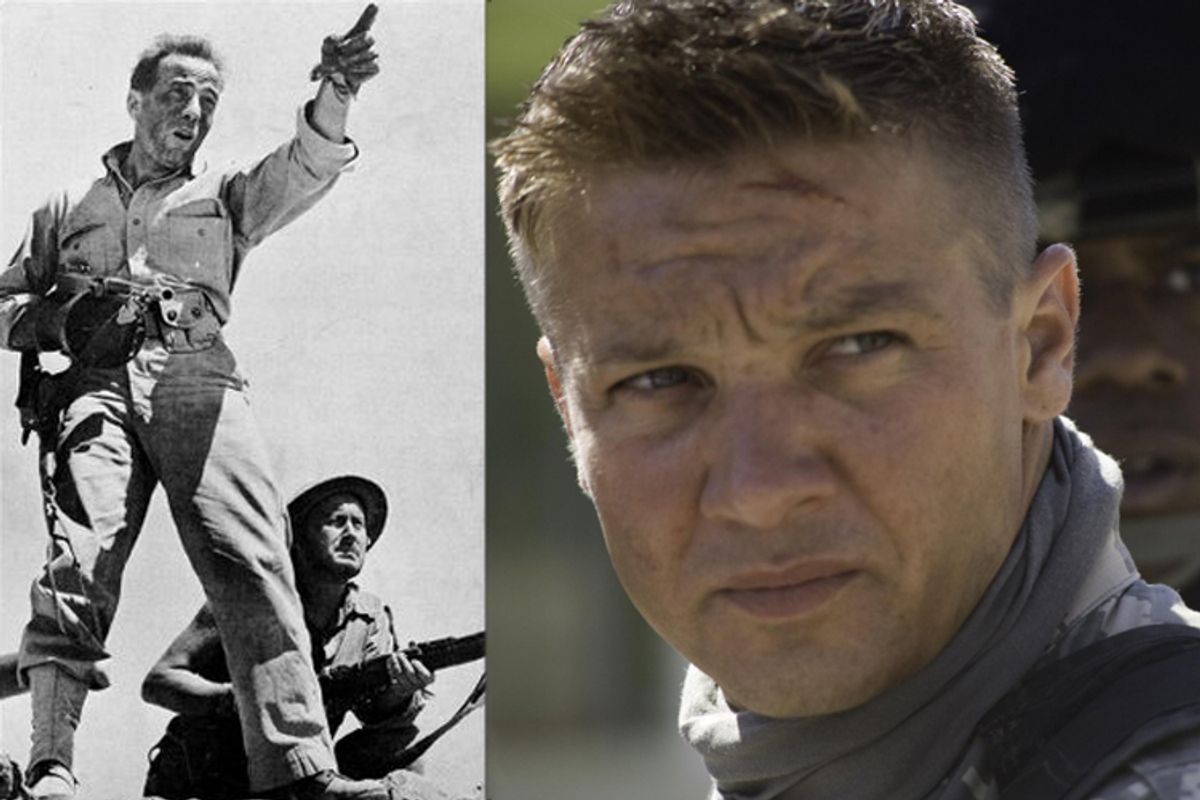 Humphrey Bogart in "Sahara" and Jeremy Renner in "The Hurt Locker"
--

The best double bill I ever witnessed was an inadvertent one. Between the hours of 2 AM and 5 AM, somewhere in the late 1970s, on San Jose, Calif.'s late, unlamented Channel 36 ("the Perfect 36," as legendary stripper Carol Doda would leer in on-air promos), I saw Busby Berkeley's 1943 surrealist masterpiece "The Gang's All Here" in an unholy coupling with Ingmar Bergman's equally surreal "The Seventh Seal."

Life, death, chess and giant bananas, in one mesmerizing, miscegenationist vision. The whole became oh so much more than the parts.

Of course, that kind of lightning does not strike twice in one's lifetime. And the near death of the local repertory cinema at the hands of home video has reduced the odds of celebrating the classic double bill. Might I suggest a way to keep this glorious tradition alive in the privacy of our own homes?

I propose to conduct a semi-regular conversation between two films, one recent and just out on DVD, and the other a less visible offering, also available on DVD (or easy, legal download) that in some strange way complements the "A" part of our bill.

I'll go first. Feel free to chime in at the end.

Today marks the release on DVD of "The Hurt Locker." Don't let the reviews fool you. "The Hurt Locker" is a straight-ahead war movie, a masterpiece of action set-pieces with an existential backbeat. If you haven't seen it, remember that bomb-defusing scene in "The English Patient," the one conducted by that "Lost" guy? Imagine that scene running for two excruciating hours. You got "The Hurt Locker" right there. (There is another "Lost" crossover in the "Locker," but, as I like to follow the 11th Commandment, which is "Though Shalt Not Spoil," you'll have to see for yourself, if you haven't already.)

But don't be fooled into thinking this film is High Art. It isn't. It's frankly mind-boggling that it is a frontrunner for best picture, though filmmaking craft oozes out of every dusty pore. There is not a frame out of place. The camera shakes, the editing crackles, the tension builds and, well, the point is? War is hell. Hell is war. And, as in any classic war movie, the guy you just KNOW is going to get it, well, gets it.

And speaking of classic war movies, to find our perfect second feature, we turn the clock back 66 years to another cinematic desert storm.

Rest your retinas upon "Sahara," another blood and sand war film, from a different war and a different era. That's not to say that there aren't direct connections between our two features. Men with parched lips. Erudite Brit vs. Sniper. Flies as best supporting insects. And a love affair between a man and his equipment. In the "Locker," it was the hero literally sleeping with his HazMat suit. In "Sahara", it is the unrequited love between Humphrey Bogart's Sergeant Joe Gunn and Lulubelle, his cherished M-3 Grant tank.

The year previous, Bogart and Ingrid Bergman had embraced a love that defied all the odds. In this case, exiled to Columbia for this one film, Bogart pitches constant woo to his Heavy Metal. When the tank won't turn over due to a bad mix in the gas, he points out that Lulubelle is "like a dame -- if you don't feed 'em, they won't do nothin'." Soon, it goes without saying, Lulubelle is purring like a kitten, taking Bogart and his United Nations on their manly desert adventure. Let's see. You got your Texan, your South African, many English-garden varieties of Brits, a cheese-loving "Frenchy," a "Mohammedan" Sudanese hero and a cringing-yet-heroic-when-it-counts Italian war prisoner.

And, of course, the obligatory blond, fashionably uniformed, multilingual, sneering Nazi. Interestingly, aforementioned Nazi is presented not only as sneering, but openly racist towards the Sudanese soldier -- racism rebuked in no uncertain terms by none other than Humphrey Bogart.

Surprising now. Utterly shocking in 1943. And the fact that this Sudanese soldier is the film's one unadulterated hero is even more atypical in an era when segregation held sway.

This is no coincidence. "Sahara" was co-written by John Howard Lawson, a future charter member of the Hollywood 10, and his script earns his reputation. In one of the film's best scenes, there occurs a scene conspicuously lacking in "The Hurt Locker," a discussion of faith and comparative religion. Seriously. Here, the Sudanese Muslim quietly explains details of his faith to the skeptical Texan. Yes, this conversation concerns the comedic virtues of multiple wives, and yes, it bears no resemblance to any conversation ever held anywhere near a war zone, but the fact that the Muslim is black, and the Texan is, well, Texan, makes this scene stand out. In 1943, when black was black, and white was white, and Good battled Evil, well, you can hear for yourself as Lawson schedules his appointment to visit the House Un-American Activities Committee four years hence.

Lest we forget, at the heart of "Sahara" there stands a grizzled Humphrey Bogart.

This month, Werner Herzog told the DGA Magazine that Bogart is the one star he dreams of directing, and here one is reminded why. When faced with a choice of leaving a man to die in the desert or saving his life, you honestly do not know what his decision will be. Moral ambiguity was never so ambiguous as played in Bogart's greatest roles, and although Sgt. Gunn is certainly not one of these, you can share Herzog's yearning for a rematch.

Did I mention that front-running Oscar thing?

Speaking of which, there is one degree of separation between "Sahara" and the 2010 Oscars. And that would be Lloyd Bridges, father of '10 best-actor frontrunner Jeff, who appears sporting callow youth and a not-half-bad British accent.

Just had to mention that.

Sound and fury signifying not-so-much; no star power, and, of course, no purring "Lulubelle."

What other films might work as a double bill for "The Hurt Locker"? Kubrick's "Full Metal Jacket"? Fuller's "Steel Helmet"? "Stripes"? What? I'm open to suggestions.